Artists at Work I Habby Osk at (ISCP)

(Neo) Constructiv – Emotionalism is conceived as a total installation comprising paintings, sculptures, videos, sound and – during the opening – a performance. The artist deliberately puts the different media on the same level: a painting is placed on the ground while a video is projected on top of it, other paintings seem to float in front of the walls and thus become sculptural… Despite the diversity of media, all these elements are interconnected and generate references to one another. Their respective position is determined by the architecture of the gallery space and is conceived by the artist as the best setting possible to inspire emotions by the viewer. Jóhanna Kristbjörg Sigurðardóttir’s installation is an invitation to discover links between the various signs, symbols, colours, forms and structures and to create new narratives to perceive the flow of energy inside each one of us.

All the works in (Neo) Constructiv – Emotionalism date from 2012-2013, except from a video in which Jóhanna Kristbjörg Sigurðardóttir is filmed painting a piece of furniture in the garden of her neighbour in Reykjavik. This untitled video from 2011 can be seen as a reflection of her thoughts about the role of the artist in our contemporary society. By revealing the presence of a red star in the legs of the table she is painting, her action can be conceived as a way to point out how artists are meant to be capable of reading emotions and transmit them through their work.

The other videos in the exhibition are records of past performances in which men or women are staged almost as sculptures. They remind rituals or ceremonies whose exact meaning is not revealed. An almost motionless video shows two spitting girls that bring to mind an unusual fountain of youth, while another one renders the frenetic movement of a headless master of ceremony surrounded by two assistants. 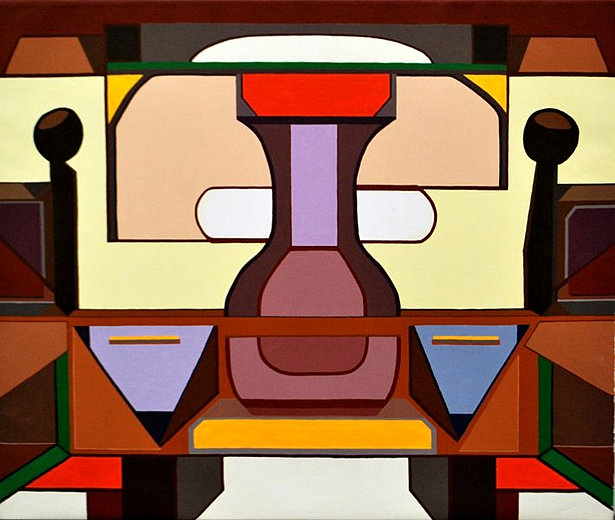 (Neo) Constructiv – Emotionalism can be seen as a manifesto for a renewed artistic practice. For this project Jóhanna Kristbjörg Sigurðardóttir was inspired by three periods in art history: she consulted the theories developed by the Russian Suprematists (1913) and Constructivists (1919) as well as by the Brazilian Neoconcretists (1950s). Certain pieces may visually bring to mind abstract works from the twentieth century but they do not ironically comment upon them and cannot be regarded as new Post-modernist products. In her work Jóhanna Kristbjörg Sigurðardóttir defends above all pure sincerity and emotional value of our existence as persons.