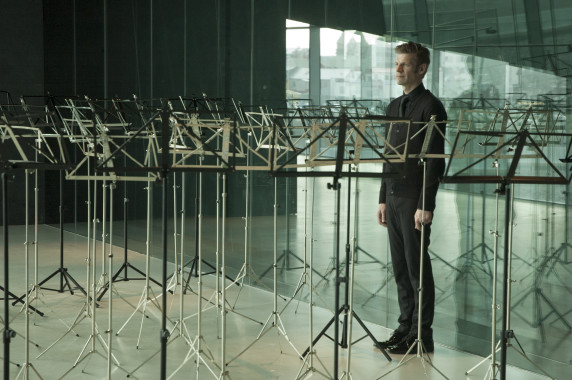 On a cold and gloomy Sunday earlier this year, Magnús Logi Kristinsson welcomed me to his studio at the Performance Art Center in Helsinki, Finland, where he has lived for over 10 years now. Magnús Logi is a performance artist known for his long durational performances where the acts of staying, being and doing little become big. He tends to make installations out of himself, sometimes using props like note-stands or boxes that he merges with and becomes one with.

Magnús Logi received an MFA at the Academy of Fine Arts in Helsinki and a BFA at the Gerrit Rietveld Academy in Amsterdam where he was living before. His work involves a lot of traveling and he has exhibited extensively all over the world. Last year he traveled through Asia and performed in China, Thailand, Malaysia and Singapore. When working on a solo performance, Magnús Logi usually gets the ideas on location, at festivals, and there the production begins. Working in Asia was similar to other sites in Europe as it is a space you have to work with. However, the reactions to his performances were completely different and he was treated more like a rock-star than a performance artist – something he has not experienced in Europe.

His work occasionally leads him to Iceland and last year he exhibited at The Living Art Museum and in 2013 he had a big presence at Sequences VI where he made “best of”-variations of his performances from recent years titled “Thinking Outside the Box… and Inside”.

In 2014, Magnús Logi played a big role in the film Time and Time and Again by Ragnheiður Gestsdóttir and Markús Þór Andrésson about the life and art of Icelandic artist Hreinn Friðfinnsson. During his years in Amsterdam, Magnús Logi got to know Hreinn (b. 1943) and has since then worked with him a lot. They are good friends and are in contact on a day-to-day basis, sharing ideas and seeking influence from each other.

The day before meeting Magnús Logi I had visited Galerie Anhava, one of the leading galleries of contemporary art in Helsinki that represents Hreinn Friðfinnsson and Kristján Guðmundsson. On view was an exhibition with works by the Finnish artist J.O. Mallander(b. 1944) in whose artworks and writings, underground, Fluxus and conceptual art found their first expressions in Finland. The connections and similarities to Icelandic conceptual artists such as Hreinn, Kristján and his brother Sigurður Guðmundsson became quite clear when seeing Mallander’s works.

As a performance artists it is rather impossible to be represented by a gallery, Magnús Logi explains, as he does not make editions of his works to sell. The performance artist has to be present and is not able to ship his works to different parts of the world – he has to attend himself. Instead Magnús Logi works more with curators who provide him with opportunities to perform.

When visiting the Helsinki galleries it becomes apparent that the Finnish art scene is quite layered; the painterly tradition is strong and on show were a lot of two-dimensional paintings and drawings. Still, the performance art scene is very vibrant and strong. The Performance Art Center where I met up with Magnús Logi sheds light onto that; a large center with practice halls, auditorium and 4 large studios solely dedicated to performances.

Meeting Magnús Logi and getting an insight into his work and life in Helsinki was an informative delight that shed a light onto the life of the performance artist and the nature of the Finnish art scene. Magnús Logi has a busy schedule throughout the year and upcoming are a duo-performance with Timo Frederiksen, called Kristinsson/Fredriksson, at the art festival Mad House in Helsinki and performances at Performance Art Oslo and Acción!MAD International Festival of Performance Art of Madrid.