‘As If to Demonstrate an Eclipse’: An Interview with Sirra Sigrún Sigurðardóttir 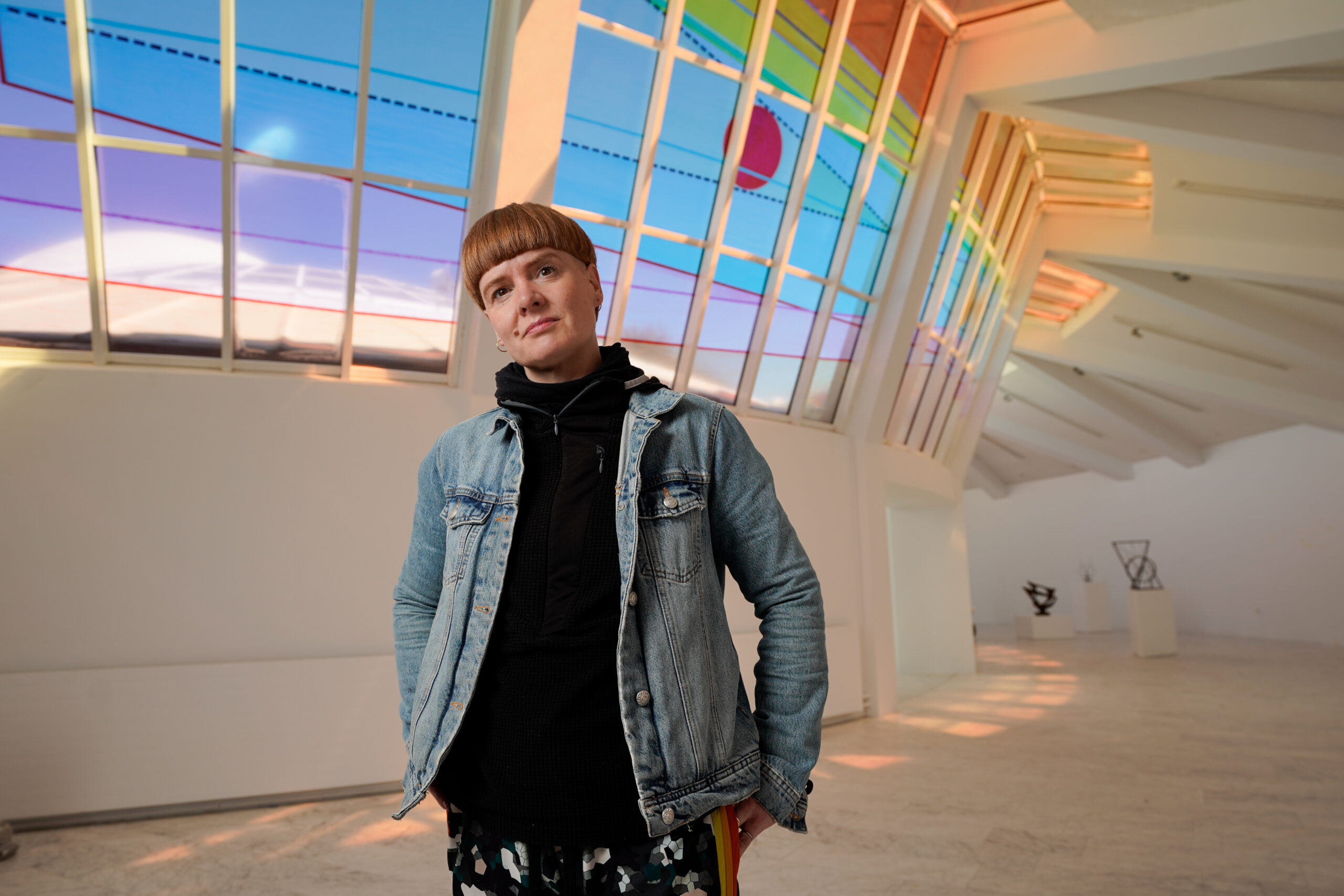 Interview by: Rudy Reding | Photos: Courtesy of the Artist and Reykjavík Art Museum

Ineffable and quiet with an astute sensitivity to space; these architectural and sensory descriptors draw on the characteristics of Sirra Sigrún Sigurðardóttir’s works as they inhabit the newly opened Reykjavík Art Museum- Ásmundarsafn alongside Ásmundur Sveinsson’s sculptures.‘As If to Demonstrate an Eclipse’ marks the reopening of the Museum and is on view until 3 October 2021. Sirra presents a selection of new works, including a site-specific sun dial. The effect of the work’s sensitivity to light and time lets us, the viewer, contemplate our existentially small part on this planet as the sun orbits it. That conception of scale and markers in human history are a point of connection between the artists—in Ásmundur’s work ‘Through the Sound Barrier’, he was capturing a moment in 1947 when the first plane approached the speed of sound. The exhibition cultivates a contemplative space between these points of connection and is curated by Ingibjörg Sigurjónsdóttir, who leaves room for the building to breathe and to be seen as a sculpture in its own right. We spoke to Sirra below on the initial starting points of the exhibition and the trajectory of her practice in Iceland and abroad.

What was the starting point for this show?

I know Ásmundur quite well, because I used to work at Ásmundarsafn, and I would guide kids through the museum. When the Reykjavík Art Museum invited me to do the exhibition, I went for the first time into the archive to look at Ásmundur’s personal belongings—letters, photographs, postcards—everything in the archive that is not exactly art. Then, through the process of reading up on his life and his career, I came across one postcard that was in his private collection showing the Olympic stadium in Athens, Greece, and also found some drawings from his sketchbooks from where he was travelling in Greece. I had seen images of him travelling, such as a photograph of him on top of the Acropolis. Those experiences of Greek architecture influenced the oldest building here at Reykjavík Art Museum- Ásmundarsafn. I personally spent some months in Greece in 2018—he was there 90 years before—and I thought that point of connection was a nice way to start the conversation between the two of us.

I was also thinking about his life’s work. He took long breaks from his practice to build and design houses—both his studio and home. Overall, it was 7 years he was not making art—he was just building with his bare hands. For me, it’s logical to see those buildings as sculptures.

So this exhibition started from archival research, but what about the formal considerations?

For this exhibition, I began with the idea to make a huge sundial out of the building, and then I had to dive into all kinds of things to make that work. So I spent time calculating angles and the sun, and trying to understand how I could make mirroring work. Through that, I got a sense for the building, and its geographical position on the map of Iceland. I wanted to conjure a really close relationship with the building. It’s so unusual—all the windows are not straight so they had to be perfectly measured up for the drawing. Everything is a bit crooked so I calculated the measurements, and then had to correct everything, which was kind of like a dance!

Do you conceive of a specific experience you wanted people to have when they visit? This is a more public context than an artist-lead space, for example.

This museum hosts a lot of really young guests, it’s very popular for kindergartens and young school children. And then there’s the older generation that have the museum as somewhere they return to. One of my main goals was to embrace the building and let the building have space to be heard. Most of the time there are a lot more works placed in the exhibition halls, and I think it’s just such a beautiful space, so it needs some air to be experienced. I wanted to create that breathing space.

That reminds me of these spaces that cross spirituality or religion with art, like the Rothko Chapel, etc. Was spirituality on your mind for this project?

Yes and no. It is not the main focus of the work, but at the same time I’m aware of the referential crossover. Like for example, having the colour in the windows of course holds a connection to stained glass windows in religious buildings. So people make that connection, and there’s a reason why that works as a component of architecture—it creates an atmosphere.

What about a more open conception of spirituality in the context of nature? For example, in the land art of Robert Smithson.

Those guys were huge in my upbringing. Being born here in Iceland, they were taught a lot and talked about in art school at the time. Many of them have visited Iceland and done some work here. They were always discussed as minimalist, conceptual artists. There was this big unspoken rule at the time, here in Iceland in the ‘90s, that we were not supposed to be talking about landscape and nature in our work. But then, everything changed around the year 2000, when Kárahnjúkavirkjun dam was being planned and built on the east coast of Iceland. There was this huge shift among all of us, and we were allowed to love and talk about nature in our art, and we were allowed to romanticise and be political about nature—all kinds of things that had not been cool before. It was great to get new imagery into our vocabulary.

So I started giving nature space and allowing it to be part of my work. Growing up in Iceland, nature is a big part of you, it’s hard to escape it. I am lucky, I’ve always been able to go up to the highlands and travel a lot, and I love it. I think it informs my way of thinking. I have been so lucky to be allowed to experience it.

So you studied in New York, which is such a departure from that context. How did that change your approach to your practice?

It mostly just gave me tools to formulate my art practice. The department that I was in at the time saw artists as an active force in the fabric of society, insisting that as an artist, you have to take a stand, be socially active and engaged with society. I think that’s good, but the role of an artist doesn’t have to match that of a social worker. Though despite those hesitations, I think all art is political, in some way.

Do you think material decisions are innately political?

I think all art is political. There are topics, for example, that I decided not to talk about in my work just because I was a young female artist. Like being a mom or using textiles, for example. I gravitated towards choosing materials that can’t be put into a certain box. I’m not so sensitive to that anymore, but it was part of the process. Also, making things big was a means of challenging the gendered stereotypes of material. I hope this has changed now. I see it in the art of the youngest generation. People are crossing lines with both the subject and how to deliver the message.

That’s easy in Iceland because everyone here is always doing so much—you’re in a band or you’re running a space, or teaching at the art academy. That mixing together creates a good atmosphere to work in, where there’s a lot of collaboration between institutions and not a lot of rivalry. The market is really small so you’re not competing, compared to bigger, urban art centers. That has created a special situation, and I like it a lot.

Has collaboration and community shaped your work?

Definitely. I think that the people you work with are really really important. They are the biggest teachers, maybe more so than formal education. I’ve been involved in Kling & Bang for 18 years now. We’ve done so many projects that we work on as a group or with different artists in different locations. For some years, it was such a hectic program, and we didn’t really have much time to analyse what we were doing. We would go from one project to the next one. I mean, that was amazing, to be able to go with the flow and produce exhibitions on the way. I think that’s the best school.

Have Woody and Steina Vasulka been an influence on your work?

Yes. Very early on, I was really lucky to have Steina as a teacher in art school. That was during a time around 2000, when media art was developing into a popular phenomenon, and it became part of my artistic development. We were learning how to use Image/ine software, which is a video signal manipulating program that Steina still uses. This was in the last century, and using it was really like programming. Now, you can do all these effects on your phone, but I think it was very influential at the time. Steina is just so hands on, and very professional, and knows her instruments so well.

We’ve touched on materials and specific forms you don’t like using because of their references, but I wonder what your approach to working with materials in a very basic sense? Do you use materials conceptually, or for instance as many artists do, working with them to refine a particular technique?

I’ve never become an expert in any materials or techniques. In that way, I think I’m often an amateur. My working process draws on a particular concept that I might working towards, and that calls for a particular or site-specific material. I think that always has to be the leading element. Of course there are some materials or techniques that I come back to, and I circle them. For example, in this exhibition the plexiglass and the colours are something that has been reoccurring for a long time in my work.

The process of learning is also a big part of my practice. For almost every exhibition, I’ve had to learn something new. I really love that. I love seeking out people that know how to use particular materials or techniques, but I still always feel like I have to familiarise myself with them too.

Your work holds a sensitivity to light and reflections—was there a point at which it became central to your practice?

If I think about it, light has been present in my work since I was in art school. First, I started to work just with light and shadows, and then around that time the projector became a big thing in art making. I used it not as a narrative tool, but more to interact with the space and the sculptures already there. Then I got really tired working with projectors, because they always place you in darkness. Slowly through time, I’ve been experimenting with ways of breaking out of that and exploring different sources of light. Light brings basic ideas, merges different mediums together. It has to do with gaining some control over the space.

How important is it for you that art plucks and draws from different disciplines and spheres of the world, rather than being in its own formalist circle?

Very important, I think you can do both—really using tools and the language of visual art but also commenting on broader, outside ideas. It’s a different world we live in now, and we are really saturated with all different kinds of information. Art can also just be a place to get away.