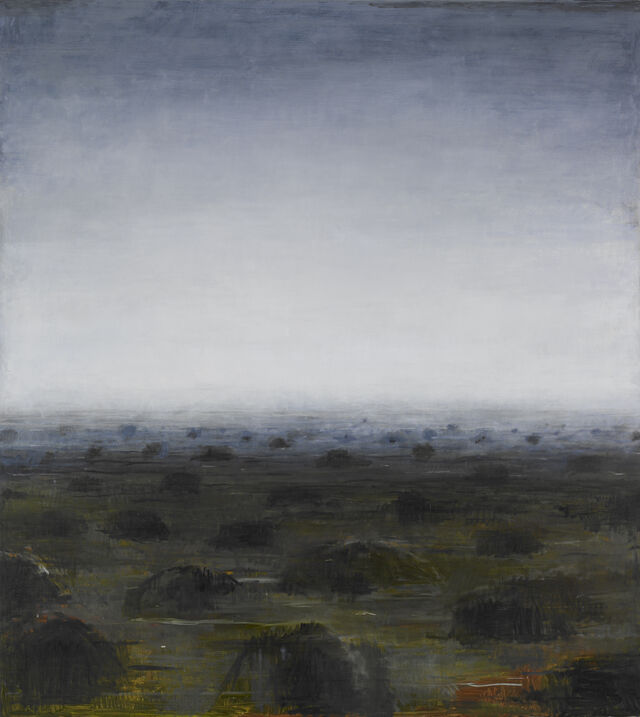 BARREN LAND
An exhibition of the work of Georg Guðni

The National Gallery of Iceland presents an exhibition of the art of Georg Guðni (1961 –2011), comprising a selection of the artist’s landscape paintings from the last years of his career.

In the spring of 2004 Georg Guðni purchased a plot of land where he went on to build a home and studio. He called the place Berangur (Barren Land), and in a sense it may be seen as his last landscape work. The name was appropriate, as all the natural environment of the place is reminiscent of the familiar elements of his paintings.

In retrospect the pressing question arises, whether it was Georg Guðni who chose this plot of land as his second home, or the plot of land that selected the artist’s inner world as a setting for its existence. It was in this habitat that Georg Guðni worked on his art for the last years of his life.

The time Georg Guðni spent at Berangur would have a decisive influence upon his last works. They are all strongly marked by the character of the rugged wilderness that typifies the nature of the region around Berangur. As before, the paintings reflect Georg Guðni’s delicate sensibility and perceptions of his environment – in face of the craggy weather-beaten barren land, and of the powerful forces of nature all around.

In his works Georg Guðni captured this primal energy in a highly refined and arresting manner. As one stands before them, it is as if the boundaries between opposing forces in existence are effaced by a single brushstroke. But behind the muted character of the last works, restless sensations began to emerge; omens of unforeseen change started to ripple the surface. It was as if there was something in the air, and the slow changes of weather gradually grew more importunate.

At Berangur the artist and the plot of land that had selected him seemed to grow ever closer together. He worked longer and longer days, and it was hardly possible to tell which came first: the land, or the painting of it. There were ominous signs that presaged changes to his life and art, whose end could not be foretold. But it was here, among the barren lands, that Georg Guðni’s unnerving vision of his coalescence with nature was perfected.

Most of the works displayed in the exhibition were made at Berangur between 2006 and 2011. Most belong to the artist’s family, and some have not been on public display before.

Georg Guðni was born in Reykjavík in 1961. He studied at the Icelandic School of Arts and Crafts (forerunner of the Iceland University of the Arts) 1980 – 1985, and pursued further study at the Jan Van Eyck Academie in Maastricht, Netherlands, 1985 – 1987. From the time of his first solo show at the Living Art Museum in 1985, Georg Guðni’s work attracted the attention of art lovers in Iceland and elsewhere. During his successful career his works were shown in many countries, and he received various awards for his contribution to international art. All Iceland’s major art collections include works by Georg Guðni, and in 2003 the National Gallery of Iceland held a retrospective of his work. Georg Guðni died suddenly at Berangur in 2011, aged only 50.

In connection with the exhibition, the National Gallery of Iceland publishes a book about this unique period in Georg Guðni’s art.

On Saturday 13 March 2021 a seminar will be held at the National Gallery about Georg Guðni’s oeuvre.