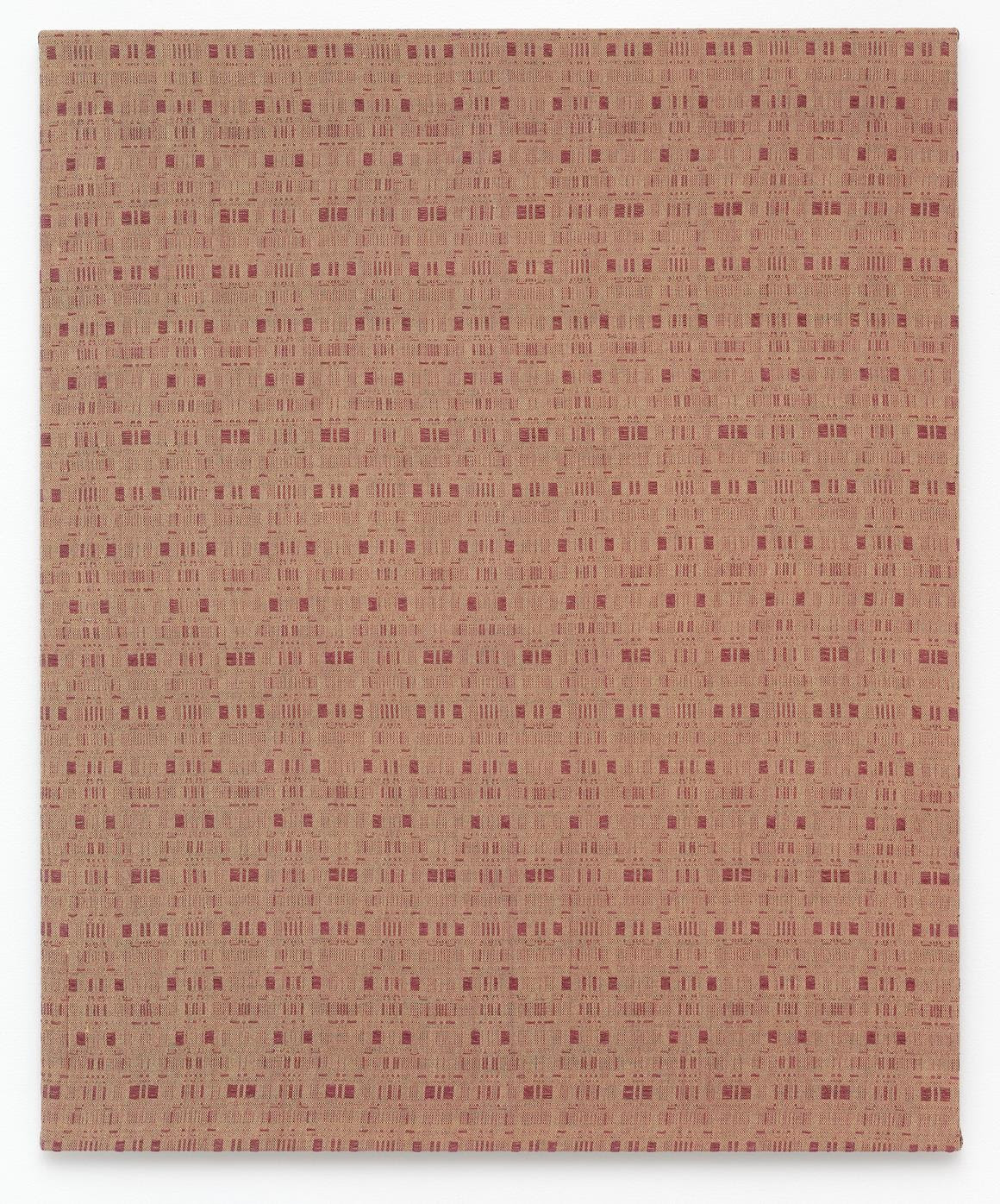 Rhythm, mimetic art, and the cadence of the world in the weaving of Hildur Bjarnadóttir.

When Hildur Bjarnadóttir began homesteading at Þúfugarður in the uncultivated marshlands of the Flói district, some five years ago, the surrounding native plants and level expanse of land and sea were the fuel of her art. That metabolic exchange of light, soil, and water is vividly apparent in her work, or “woven paintings” as she calls them: wool and linen weaving in which earth’s juices are the wellspring of the colour while the form arises from the rigid network of the loom, through a craft based on age-old tradition. Tradition is not, however, the only thing that Hildur means to show us through these rigid specifications; here tradition brings about an encounter with the present, as nature and culture meet in a surprising dialogue with contemporary digital, networked visual culture, a dialogue concerning, among other things, what it means to show and to be. Hildur’s works are “paintings” in which the canvas is not a hidden platform for paint but a densely-woven web of linen or wool threads drenched in colour; the colour has been purged of all reference to anything other than the materiality of the weave itself, a network that echoes the contemporary screen image’s pixel meshwork in a provocative way. Thus Hildur’s work has opened up a new understanding of painting as a medium of mind and hand, culture and nature.

Though the impetus for pioneering in Flói was for Hildur to commune with the local environment, the prospect changed abruptly when she and her partner Ólafur S. Gíslason had the good fortune of welcoming twin daughters, Urður and Salka: Life in Flóinn no longer revolved around communing with earth colours but around constant, demanding care for these new Þúfugarðar settlers, who relentlessly demanded breastmilk, bodily contact, company, and conversation. What’s more, the newborns’ staggered shifts of sleep and waking disrupted the whole cadence of time, in what had otherwise seemed a timeless coexistence of day and night in the rural peace of Flói. The newborns’ onerous task of mastering the world upended life in Þúfugarðar and called for a new rhythm of existence. New work shifts and job rotations were inevitable, and to simplify matters Hildur drafted a new pattern in her journals: Urður and Salka’s sleeping hours became an Excel sheet, and as Hildur slowly began to find hours to sit at her loom, earth colours no longer occupied her mind as before; now it was time, Urður and Salka’s common or staggered nap times, that engrossed her. In short, the Excel sheet of the twins’ naps became a new framework, not just for family work shifts but also for the loom, as a new rhythm emerged in the weave: While the ground of the weave remains, as before, vertical yellow woollen threads drawing their colour from local flora, now it contends with a dark-blue horizontal linen weft thread, painted with acrylic paint; the sisters’ nap times determine whether this shuttle thread hides the background or vanishes into the tight wool-and-linen weave.

This new programme for the loom, based on a fixed, quantifiable rule, revealed new patterns inscribed in the weave, patterns that also acquired a rhythmic quality. Each day has its rhythm, its pattern, and the weave as a whole becomes a sort of calendar of time-based variations on a musical theme. When we view this rhythm, the sisters’ sleep is far off; we neither see nor hear it. Rather, we perceive it through this rhythm, which is rooted in nature no less than the natural dyes are. What is it that we see? We see the rhythm as extent, not sleep.

What is rhythm? Rhythm is a time-based phenomenon having to do with repetition. First something happens; then it is repeated: 1+1+1… Therefore rhythm has to do with memory: Repetition entails recognizing that which is repeated, such as sunrise and sunset. Thus rhythm also has to do with knowledge: We can never know the beginning buried in the origins of space and time; lacking any perceivable precedent, it is both invisible and inexpressible. Repetition is the prerequisite of all knowledge. The black hole of the “Big Bang” is also a paradoxical metaphor, within the established figurative language of science, for something that existed before everything existed. There is no established model, within time, for the Big Bang; therefore it is a metaphysical, mythic metaphor.

Rhythm is innate to humankind, just as it is to so many natural phenomena: People are made with two feet and walk in rhythm; they are made with two hands and move them in tandem. They have two eyes and blink them in tandem, and moreover have a heartbeat and rhythmic breathing. Humans have all this in common with most vertebrates, with the tail-strokes of salmon as well as the wingbeats of birds. Yet there is one difference: Hens may cluck rhythmically, but they don’t know Beethoven’s Ninth Symphony. What is the difference?

A honeybee’s rhythm is entirely within itself and the flower. The rhythm of art, by contrast, points beyond itself. It has to do with memory and meaning: a repetition of that which is gone forever. It is our image of time, the past that is forever gone and the future that is always yet to come. A fabricated rhythm conveys both mourning and anticipation; it is an occurrence that makes us aware of the past, allowing us to grasp it in its intangible absence. The rhythm of art happens on the boundary between what has been and what will be. It is an endless variation on the beginning. It ultimately contains the consciousness of death.

The rhythm in Hildur’s weaving is not confined to the variations of sleep and waking in her pattern. It is also inherent in the physical exertion at the loom itself: In a way the loom’s treadle and shuttle recall a pipe organ, in coordinating hand and foot to create a weave that, like the pattern itself, indicates the cadence of the world that envelops our lives and existence. All peoples’ languages are rooted in the world’s rhythmicity, which goes back to the beginning that lies beyond human understanding. Just as written language is rooted in song, song is rooted in the primal cry that is beyond human understanding and which we can trace not only to our ancestors in the animal kingdom but all the way to the above-mentioned Big Bang that science tells us, in its metaphor, marks the beginning of the world. Mime and dance are rooted not only in the ritual invocations, of weather gods or gods of the hunt, of humankind’s effort to gain power over nature; they are rooted in the beginning that can only be grasped through repetition, in the mythic image of the origin of the world.

We cannot look toward myths of the world’s origins otherwise than through the rhythm of nature; likewise, we cannot look toward our own origins otherwise than through the miracle that happens in the womb when consciousness of rhythm arrives through the foetus’s perception of the mother’s heartbeat. The first beat is in darkness, then it happens again; with that, the world’s rhythm becomes part of our lives through the knowledge of what has come before and what is imminent. Human civilization arises when humanity learns to cultivate the imitation of rhythm to imbue human life with meaning, a meaning not restricted to conceptual definitions but inextricably bound up in our intertwined bodily sensations – of the world’s cadence as reflected in, for example, our breath and heartbeat – and in our various intertwined modes of bodily expression, sound and word, image and gesture, somnolence and wakefulness. We see not with our eyes or brain but with our whole body. Our perception of the world’s cadence is inextricably entwined with our bodies and our life, apart from all the analytical sciences’ worthy attempts to reduce the world to its subatomic particles.

It was Urður, Hildur and Ólafur’s daughter, who gave the sleep pieces their name: The word ‘abyss’ was among her first attempts to connect sounds and language with objects through imitation. She heard her father use the word appelsína when handling oranges, that desirable fruit known in many languages as a China apple, or appel-Sina with the pertinent tonal variations. Urður knew nothing of these associations; rather, she learned through her own insight that this strange sound had a mysterious connection to this sun-yellow fruit, not just once but every time it came into view. Her control of her vocal cords was imperfect, to be sure, as she was not yet 12 months old, but she perceived that these sounds pertained not only to one particular object but to all the fruits that bore this desirable scent and texture, this clear yellow sun-colour, and these sour-sweet delectations of the gustatory sense. She said, “Abyss!” and her parents unhesitatingly knew it was the moment to break open the juicy flesh of the fruit. Urður, for her part, had yet to master the English tongue and thus had no idea of the profundity this sound would have conveyed, had she been situated in an English-speaking society. Yet the abyss in question here confronts us all: namely, the abyss between words and objects, the abyss that separates language from objective reality, not just in imitative sounds but in all bodily mimicry, signals, and imagery. This is also the abyss between sleep and waking, the abyss between the world´s cadence and our image of that cadence. It is this abyss that gives Hildur Bjarnadóttir’s woven works the noble quality of humanity’s doomed striving toward the universal, a striving that makes our imitative arts tragic and, at the same time, delightful.