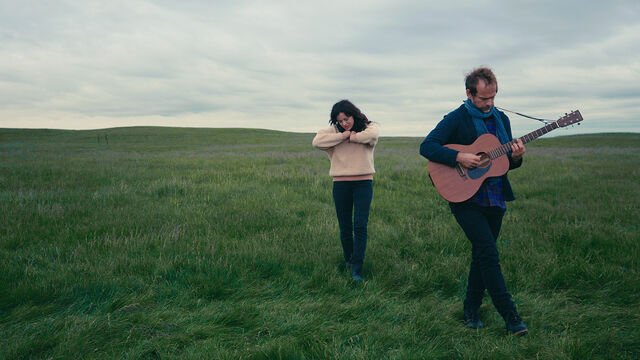 During the bright summer months, the National Gallery of Iceland shows the video installation Death Is Elsewhere by Ragnar Kjartansson – filmed one Icelandic summer night, when darkness never falls. This seven-channel work is one of the large-scale video installations which have been prominent in Ragnar‘s art in recent years, where repetition, time and space play important roles. In Death Is Elsewhere the artist returns to familiar territory, where a romantic utopian spirit reigns. The ambiance is one of insouciance and melancholy as young couples wander through unvarying lowlands, singing to a guitar accompaniment. The symmetrical picture and constantly repeated melody entice the observer into the work’s unending circularity, shutting out impending doom while constantly alluding to it.

Death Is Elsewhere was filmed in the Eldhraun lava field in south Iceland, near the volcano which erupted in the historic Skaftá Fires of the late 18th century, causing devastation in Iceland and affecting climate worldwide. By this choice of location, Ragnar references the eruption and the history, and he also brings Icelandic art history into the work, for instance by evoking the landscape paintings of Jón Stefánsson (1881-1962), and not least the light summer nights which were a favourite theme of Icelandic landscape artists in the early 20th century, at the time of the pioneers of Icelandic art.

Ragnar Kjartansson was born in Reykjavík in 1976. He studied at the Iceland University of the Arts 1997–2001, and was an exchange student at the Royal Academy of Fine Arts in Stockholm.

Ragnar is the best-known Icelandic artist today, and his works are displayed in prestigious museums around the world. He represented Iceland at the Venice Biennale in 2009, and in 2019 his video installation The Visitors was chosen as the best art work of the 21st century by the Guardian. Death Is Elsewhere was first shown at the Metropolitan Museum in New York in 2019, and this is the first time it has been exhibited in Iceland.

Death Is Elsewhere is dedicated to Carolee Schneemann.

Text based on the writings of Alexander Dumbadze, Robert Lax and Sappho in Anne Carson’s translation