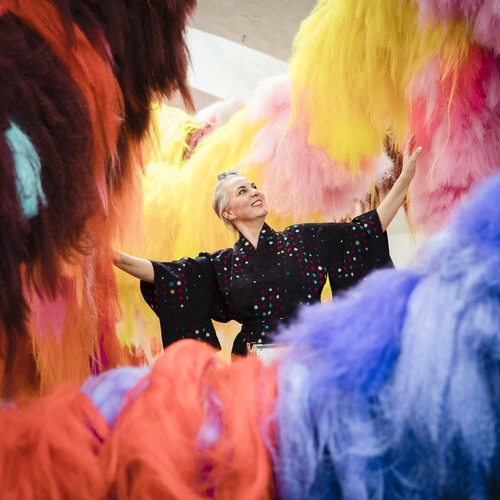 On 3rd July, a new art exhibition will be opening on the beautiful island of Hrútey. The exhibition is a large-scale, outdoor artwork by New York based visual artist Hrafnhildur Arnardóttir, otherwise known as Shoplifter. It will be open to the public until 28th August.

Hrafnhildur is temporarily living in Iceland, but part of the time-consuming work of making the works takes place in her studio in Reykjavík. At work, the raw material, which is either nylon hair, plastic or other synthetic material, is processed with various traditional textile techniques such as floss, shearing, felting, knots, braids and sewing, but the material is also in some cases heated, burnt, melted, dyed or painted. Once the desired thickness and texture have been achieved, rugs, tassels, ropes, ribbons and other things are created that will be used to create the final work of art. The material thus created will be transported north to Blönduós where it will be transformed into tufts, plants, shovels, flowers, shrubs, trees, rocks, guards, cliffs, etc. The works will be distributed around Hrútey with certain points of emphasis, so that when you walk around the island you will find puffins, flats or laurels that art has taken over and we will encounter unexpected and unnatural visitors in Hrútey’s very natural environment. In this way, Hrafnhildur creates a tension between what is real in the landscape and the soft and subtle invasion that the works are when they make an attempt to mislead sources in the realm of nature.

Shoplifter’s most recent projects include solo exhibitions at Kulturhuset in Stockholm, Kiasma – National Gallery of Finland (2019), Art Museum of Iceland (2017), Walt Disney Concert Hall in Los Angeles (2017) and Queensland Art Gallery of Modern Art in Australia (2016). Other notable projects and awards include an installation in MOMA’s window, the Museum of Modern Art in New York (2008), which she co-authored with art collective assume vivid astro focus (avaf), the Nordic Textile Prize and the word of Prince Eugen given by the King of Sweden. a special achievement in the field of art (2011). Hrafnhildur has long been one of Björk Guðmundsdóttir’s main collaborators and has, among other things, taken care of the singer’s appearance and the graphic appearance of several of her major projects.

The project’s partners are;

The Icelandic Textile Center and the Knowledge Center in Blönduós