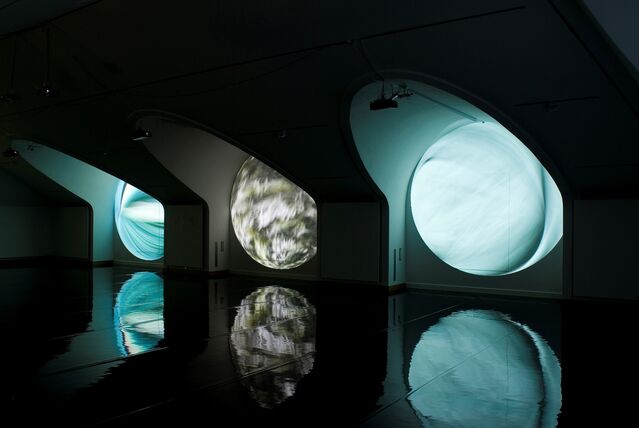 Steina Vasulka: Of The North

Steina’s gigantic video installation Of the North (2001) is an arresting and captivating work that touches all who see it. In the 1960s the possibility of recording sound and video in real time opened up new dimensions in the world of visual arts. Steina Vasulka and her husband Woody got to know avant-garde artists working in the new media when they were living in New York, where they ran The Kitchen for a time – a venue for audio and video artists that opened in 1971. That was a time of rapid technological advances in electronic culture, no less than in space science. Steina (Steinunn Bjarnadóttir Briem) and Woody Vasulka were pioneers who collaborated on a range of research regarding video art and the harnessing of electronic (and later digital) pulses. The equipment itself was also used in a dialogue whose aim was to create interesting works of art without compromising standards. Their colloquy with technology became most interesting and rewarding, benefiting from Steina’s background in music and Woody’s technical expertise. “Motion and time are key aspects of my art,” stated Steina.

Of the North (2001) is created from Steina’s archive of video recordings, mostly of Icelandic nature – either the surface of the earth, or microscopic views: microbes, as well as crashing waves and melting ice, landslips and an array of natural phenomena relating to geological formation and destruction of our planet. The work also reaches out into space, with spherical objects rotating around an imaginary axis in a hypnotic rhythm, with all the concomitant sounds. The beat and energy evoke imagery that may lead the observer’s thoughts in many directions – whether to magnificent beauty, or more down-to-earth musing on the vulnerability of nature and the impermanence of the earth.