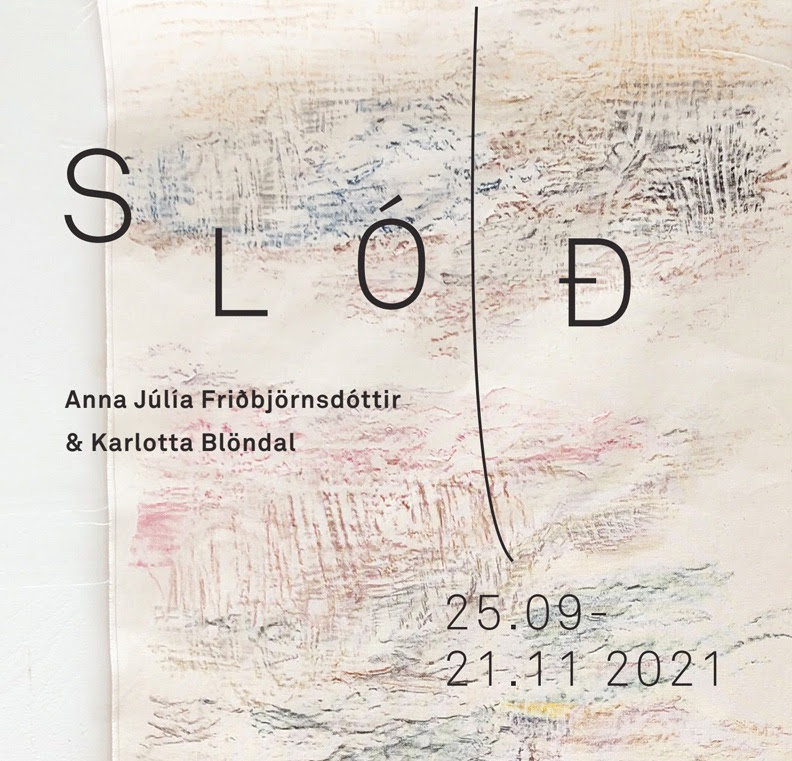 Slóð (Trace) is a joint exhibition by Anna Júlía Friðbjörnsdóttir and Karlotta Blöndal. Their contributions were made separately, but both artists refer with their works to the important archaeological find at Vestdalsheiði in the mountains above Seyðisfjörður. Discovered in 2004, it consisted of human bones, jewellery and glass beads and is believed to date from the mid-tenth century. The remains are thought to belong to a female travelling healer, who became known locally as the “mountain lady”. In addition to this joint interest, Anna Júlía also explores aspects of the local history of telecommunication technology.

Anna Júlía Friðbjörnsdóttir traces connections between past and present, man and nature. Her works travel between two worlds, and in a way, between metaphysical dimensions. Their materiality and their presentation intertwine local cultural history and speculations about messages that travel back and forth in time. Here, copper plates are arranged in Morse code, derived from the QSB communication signal in Q-code, which stands for “Are my signals fading”? The plates show drypoint etchings of a fragmented cliff and mountain terrains around Seyðisfjörður. In another work, beads arranged on copper wire spell the word “Trace” in Morse code. The copper possesses tangible and subjective references to electronic communication and serves as an intermediary between the spectator and an unidentified recipient. Into a thin piece of paper, suspended from the ceiling, the phrase “It snowed in the calm from time to time yesterday” is perforated, using the old punch tape technology for transmitting telegraph messages. The sentence is a quote from a local weather report, dated 1952.

Karlotta Blöndal‘s work revolves around the “mountain lady” herself and around the location of the archaeological find. Several times this summer, the artist has explored and worked on the site in an attempt to capture the environment and mood of the area. In her interpretation and documentation, she operated under the auspices and methodologies of art while referencing the research of archaeologist Rannveig Þórhallsdóttir, who has written a paper on the find. Karlotta’s documentation of the location takes the form of works that are, on the one hand, abstract and on the other hand, realistic drawings in the spirit of 18th-century travel books. The abstract works on canvas take their shape from the archaeologists’ site layout and the texture is obtained with frottages of the ground. The colours reference the range of the multitude of glass beads found there. With her work, Karlotta transfers the place into Skaftfell’s exhibition space at the same time as she integrates the many speculations about who and what the mountain lady and her fate may have been, thus reflecting our conscious and unconscious interpretation of the past.

The process and presentation of Karlotta’s and Anna Júlía’s work open up for a contemplation of time and space through which they pull a thread and create a platform where the present and past meet. Where was the mountain lady heading and where are we heading? We receive the end of the thread and carry it forward.

We would like to express our gratitude towards Rannveig Þórhallsdóttir, archaeologist, Zuhaitz Akizu, director of the Technical Museum of East Iceland, Grétar Einarsson, former employee of the the Central Telephone Office in Seyðisfjörður, and Pétur Kristjánsson, former director of the Technical Museum, for their helpful information during the preparation of the exhibition.

What we think happened

Communication started as a simple signal. Smiling, frowning, nodding, shaking your head, left, right, you, me, off, on. We needed to be close to one another; I could say something to you and then you could say something to me. We started performing more complex signals and then signals that could reach over our long distances. But though the language became bigger and more precise and communication became deeper, we also know that messages, language, communication is imperfect, often ambiguous; it is possible to misunderstand, to interpret wrongly. Knowing this transfers responsibility for this communication away from the language itself and onto those who send and receive those signals and signs. Is this message for me? Is this what is being said to me, or is it something else? Do I understand? Is what I found – a body, beads, a knife, in a hollow up on the heath – telling me something? Is it up to me to respond?

Time is always part of any communication. A message or a signal takes place in time. Time can also distort a message, rip it apart, just as time can keep and carry something, some slight trace, something incredible. So incredible sometimes that it is not obvious what it is we are seeing in front of us or what we are supposed to think about it. A reminder that we can never be completely sure even about the things we think we know. That we cannot know exactly what is being said to us. And with that, something opens up. Everything, seemingly, is possible. Which might be frightening but is also mundane, normal. When there are many possibilities, many possible paths, then we must interpret and guess. Like how we guess about the weather or directions or how the silence at a funeral or between two people who love each other means something. The silences are as important of course as the sounds or the movements, the silences in a Morse-coded message equal to the beeps, etc.

In this way we guess here: What would I be doing up on the heath? What do I believe about the future? Why would I have beads? All these beads and a knife? A young person on the heath. Trying to find shelter among the rocks to die or to survive? Right before you disappear for a thousand years. Though, not everyone is found again.

There are endless questions. Is this in summer or in winter? Are you living and on your own feet or are you dead and someone carries you? Maybe you are a seer or a seeress, a sage, sibyl, spaceman, and see your death coming – or guess, in any case, of its coming. Maybe you are a thief who took the beads, ran off, but did not get far enough. Last words? I do not know.

If we are guessing then everything can be language, meaning, communication. But guessing is what we do, we cannot but. And even if we imagine that what we, with the best of our ability, have guessed – that what we think happened – is right, then we know also that it can never be wholly confirmed. We will guess something else today than yesterday. Your guess will be different from mine. We might guess better today, with other tools and another community around us, than when a body or a clay pot or a painting was found a hundred or a thousand years ago. And maybe one day we will know everything about all of this and will be able to communicate completely without doubt, but today we still need to love looking and thinking and guessing.

Then maybe the message here, the meaning, is that we found this person again. Maybe this person would be grateful for it. That this person can now say look, here, what I have got. The beads still beautiful. Shelter still among the stones.

Anna Júlía Fridbjörnsdóttir (b. 1973) is an artist based in Reykjavík. She combines various media to explore the intersection between science and culture informed by historical and current politics. She finished her MA Fine Arts degree from Manchester School of Arts, Manchester Metropolitan University (2004) and BA Fine Art degree from Guildhall University, London (1998). She also studied at The Icelandic College of Arts and Crafts in 1993-95. Anna Júlía was a co-founder and editor of Sjónauki Art Magazine, published in 2007-2009. Her works have been exhibited in numerous international group exhibitions and at solo shows in Iceland, including the exhibition Serenade at Hafnarborg Centre of Culture and Fine Art in 2017, for which she was nominated for the 2018 Icelandic Art Prize. Currently, her work is part of the exhibition Iðavöllur at the Reykjavik Art Museum.

Karlotta Blöndal (b. 1973) lives and works in Reykjavík. She works in a variety of media, ranging from drawings, paintings, publications, environmental installations and performances exploring notions of dimensionality, the connection between the material and the spiritual. By emphasising aesthetics Blöndal investigates the dynamics of a given site or situation, including the manipulation based on our assumptions of what it means to us. Her works are based on formal associations which open a unique poetic, and sometimes ephemeral, vein. Karlotta Blöndal studied in The Icelandic College of Arts and Crafts where she received a BA degree and at the Malmö Art Academy Sweden, where she received her MFA in 2002. She has been involved in numerous artist run initiatives, such as the Living Art Museum and Signal gallery Malmö and was co-editor and publisher of Sjonauki art magazine. She is part of a long term collaboration project called the Journey to the Magic Mountain, 2013-2020.