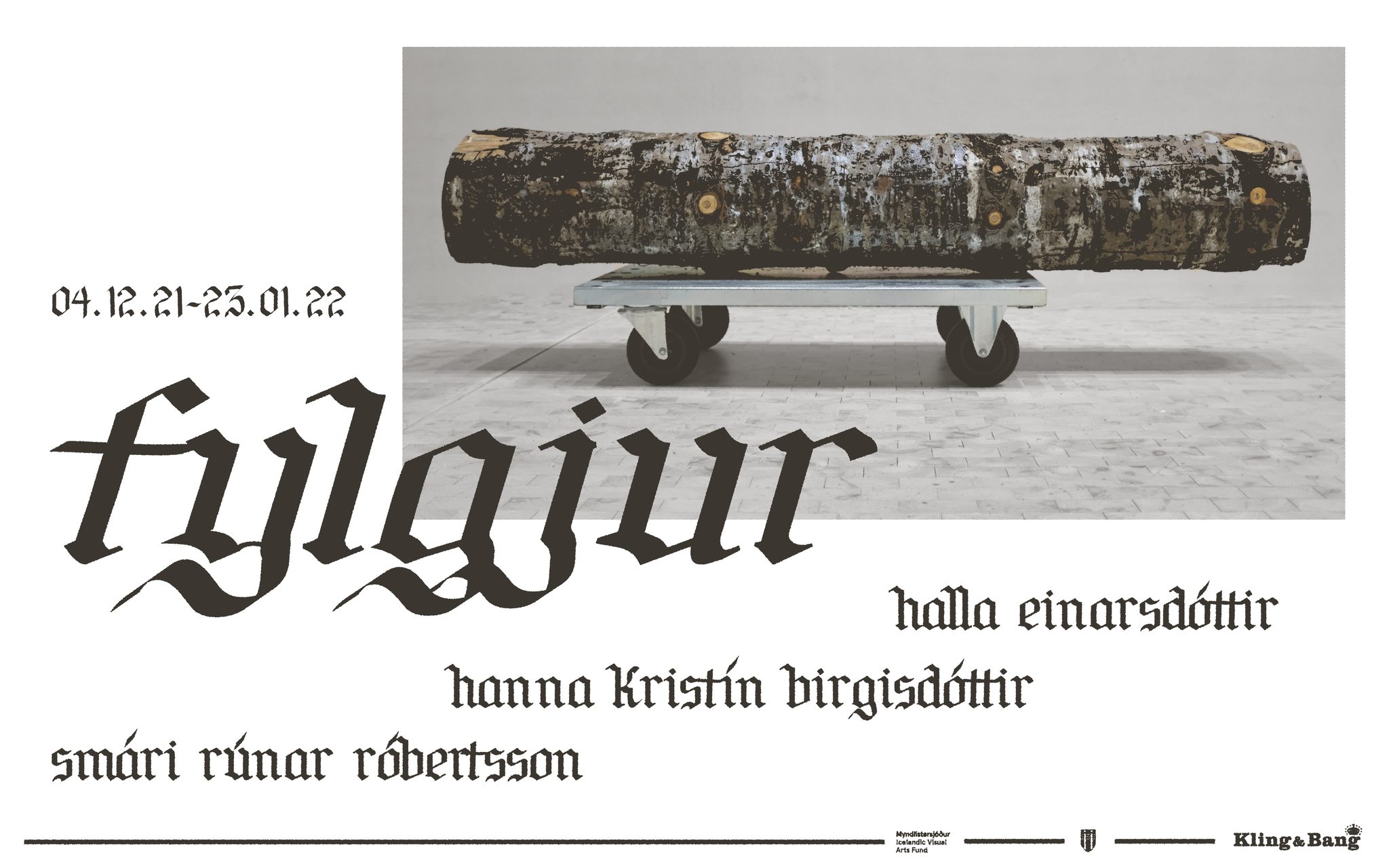 Kling & Bang invites you to the opening of Fylgjur, a group exhibition by Halla Einarsdóttir, Hanna Kristín Birgisdóttir and Smári Rúnar Róbertsson on the 4th of December from 4 to 7 pm. The exhibition will be open until 23rd of January 2022.

At 6 pm on the opening day Halla Einarsdóttir will do a performance.

Halla Einarsdóttir (b. 1991) is an Icelandic artist that lives and works in Rotterdam where she recently completed her MFA at the Piet Zwart Institute. Before that, she obtained her BA in graphic design from The Gerrit Rietveld Academie in Amsterdam. Working predominantly with performance, sculpture, and video, she takes the role of a narrator weaving various source materials and allowing them to feed her vocality, gesticulation, and delivery. Leaning on a tradition of feminists dealing with the question of myth, she examines transgenerational knowledge and the multifaceted nature of reclaiming names and narratives. Halla operates somewhere between myth-receiver and myth-giver often exploring the ways in which narratives have been instrumental in establishing and maintaining epistemological hierarchies and systems of control. Halla has exhibited in various exhibitions in the Netherlands and abroad.

Hanna Kristín Birgisdóttir (b. 1989) is an Icelandic artist that lives and works in Bergen, she holds a BA in fine art from the Iceland Academy of the Arts and Master degree from the Bergen Academy of the Arts, where she graduated in 2020. Hanna has exhibited both in Iceland and abroad. Among her projects are: Silent act, Skaftfell Seyðisfjörður and Like a breath being compressed into a high pitched sound, Kling & Bang, part of the Sequences Art Festival.

Smári Rúnar Róbertsson (b. 1992) is a icelandic artist working in Amsterdam. His interdisciplinary practice consists of a diverse set of mediums arranged as intertextual examinations of the artistic process, mythology, and meaning. Through an assemblage of process, installation, and writing, he looks for (re)semblance between the physical and the imaginary to examine the fractal quality of systems that govern our environment, identity, stories, and thoughts. Works act as a registered gesture, the medium presenting or existing at the moment, while simultaneously referring to its own production. In Smári’s work, labor can thus be regarded as a tangible material that is stretched, compressed, and molded into a rhythm of consciousness, repetition, and lore. Smári holds a BFA from Gerrit Rietveld Academie (2015) and an MA from the Sandberg Instituut (2017) in Amsterdam. He received the Amsterdams Funds voor de Kunst and Bureau Broedplaatsen 3Package Deal talents grant in 2017.