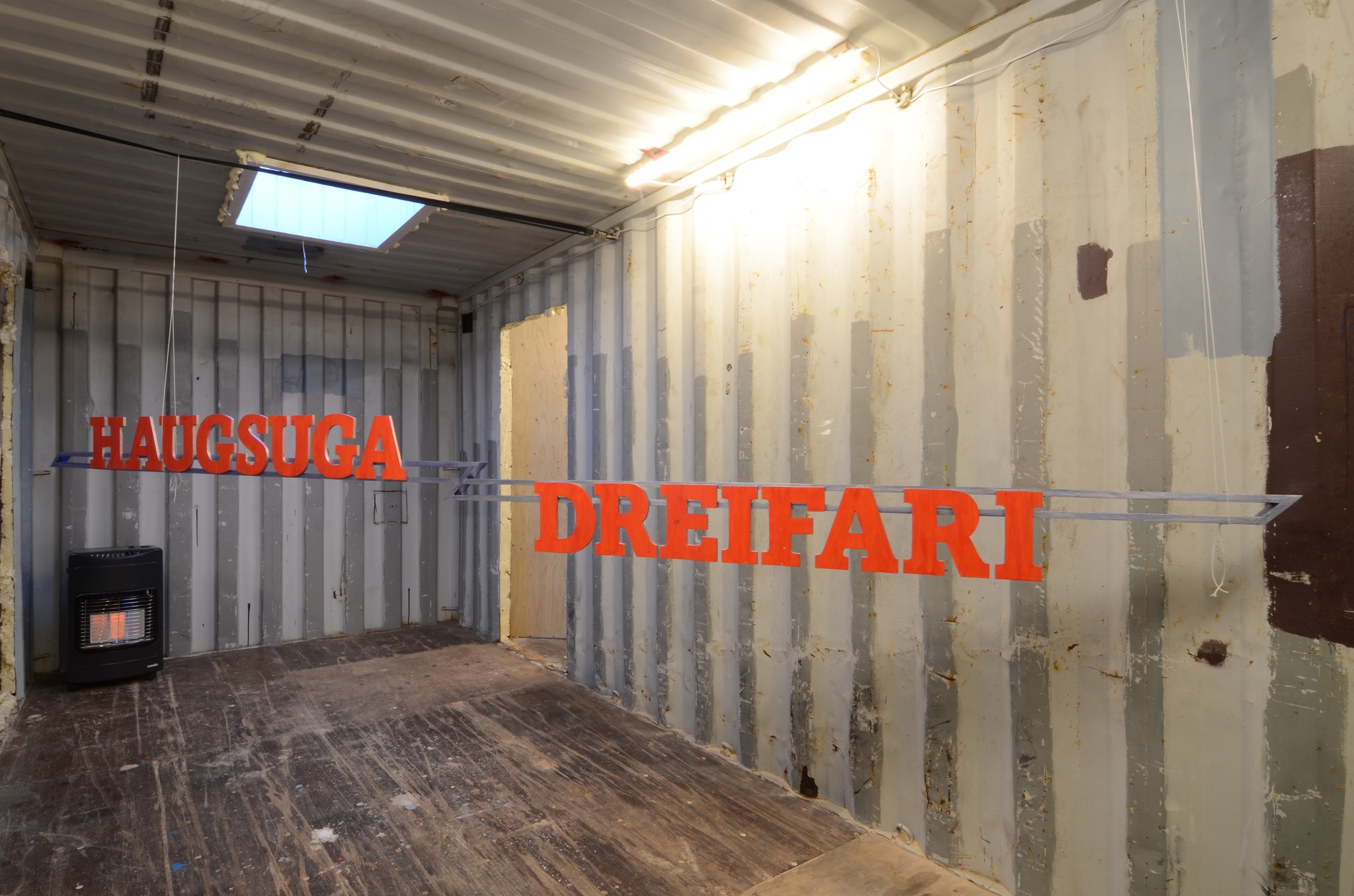 In contemporary art criticism it is often argued that we are incapable of valuating works of art, whether it is films, music or visual arts, unless we put them in the context of other works of art. Somehow everything we see, or create, reminds us of something else. Our culture has become so overloaded with images and information that we lack the capacity to process them individually. So, possibly, they just merge into one big pile.
If this is the case, the unpolluted artist, natural talent or pure genius, belongs to history. The contemporary artist simply responds to information and images, processes them and puts them in context to create a dialogue between forms, ideas and images, which, to some extent, are familiar to us but possibly gives us a fresh and unexpected approach to them.

In Helgi Hjaltalín’s exhibition, Slurry Pump-Spreader in Kling and Bang, we encounter mainly four parts that overlap with each other and create this necessary dialogue. They are:

History and Contemporarity
In an art historical context, the visual language of Helga Hjaltalín is related to Pop Art movement of the fifties and sixties. Pop Art challenged the value of art and created parallels between art and popular and consumer culture.
These parallels merge in Helgi’s work in a kind of over-consumption of images. On one hand with mass production or reproduction techniques to produce repeats of the same image, and on the other hand a combination of watercolor sheets, where each sheet stands as an independent image, or painting, while a number of them joined together merge into one large watercolor image.
Helgi locates his subject or images on the internet and transfers them to works of art. The concept of Post-Internet Art has recently gained recognition in the methodological analysis of many contemporary artists, and is interesting to look at in connection to Helgi’s work, but without labelling the concept to his methodology. Much of Post-Internet Art is reminiscent to the imagery within Pop Art. Especially the one that relied on photographs for paintings or collages. However, Post-Internet Art is not an art movement in the same sense as Pop Art was, nor does it apply to “art after the internet” in the same way that Postmodernism applied to “art after modernism”. Post-Internet Art refers to art in the period of the internet.
Artists and scholars do not agree on the importance and meaning of the term, or how the internet should be reflected in art in order for the term to apply. Basically, we can say that the internet becomes a part of the artistic creation process. However, many claim that the term only applies if some of the properties of the internet are also retained in an artistic embodiment, e.g. like when Helgi combines many watercolor sheets into one image, like when pixels are used in digital processing.

Original and Replicated Images
When Helgi finds an image on an internet search site and applies it to his own art, he defies the idea of originality and replica. He appropriates an image that someone else has made. However, it is not entirely certain that a picture that Helgi uses is a prototype. There is a plethora of the same image online and usually we do not know which one of them is the original, nor even whether the image is actually true to the original image, as it is often unclear whether an image online has been altered or not. In this way, forms and texts that appear in Helgi’s paintings can well have been added to the original and are therefore fictional, just as the artist himself can allow fiction to play a role as he implements the digital images in material form.

Proportions and Space
Downloading an image from the internet and translating or interpreting it into material and form not only changes its essence but gives it a completely different role in terms of proportions and space. This is very important in Helgi’s show. Sculpture has been the main focus of his art throughout his career. And after watercolors and prints began to appear in his work, it has been in association with sculpture.
Sculpture belongs to reality space. An image, on the other hand, is two-dimensional and should therefore be thought of as image space. Images can, however, challenge the boundaries of image space and reality space if their scope is blown out of whack. For Helgi, this happens on one hand with the aforementioned oversized composite of watercolor paintings and on the other hand with reproductions of printed images that cover the art space and partially take it over. Not to mention watercolored images of engines that hang over wooden pallets and have been soaked in engine oil, so that smell even begins to affect our spatial experience.
However, sculptures in the exhibition play a different role. They are miniature replicas, or models, of engines, wooden pallets and platform. As such they appear in contrast to the plethora of images.
buy wellbutrin online https://blackmenheal.org/wp-content/languages/new/wellbutrin.html no prescription

A model is usually thought of as a proxy for a full-sized object and shown as a proposal for it. In this way, Helgi’s models can be seen as a proposal for another exhibition in the same art space, at the same time they are part of the existing exhibition. The models therefore stand as sculptures as well as proposals for sculptures.

Art and Leisure
Helgi´s models challenge the boundaries between art and leisure, but making models is a well-known hobby that requires craftsmanship. Especially if it is built from scratch. These boundaries are part of Helgi´s artistic contemplations and are reflected in his craft and choice of material.
The small sculptures are carved from wood with a cutting knife, the subject matter is from found images, all his reproductions are made with home-made printing methods and watercolor is without a doubt the painting medium that mostly attracts leisure activities. All of this goes against the exaltation of art, despite falling under the materials and methods that belong to art.When Pop Art questioned the value of art, it attacked the exaltation of art and any conclusive disciplines of art, e.g. the purity of geometric art or the autonomy of abstract expressionism.
It goes without saying that Helgi Hjaltalín’s methodology and imagery counter the exaltation of art and the exhibition itself rejects any conclusive disciplines. The parallels that have been drawn above are only a reminder that artistic creation has much more to do with the process of questioning rather than conclusive disciplines. Therefore, for me, the exhibition itself becomes a platform where we can join in the process of questioning and participate in a dialogue between forms, ideas and images, which, to some extent, are familiar to us but possibly gives us a fresh and unexpected approach to them.