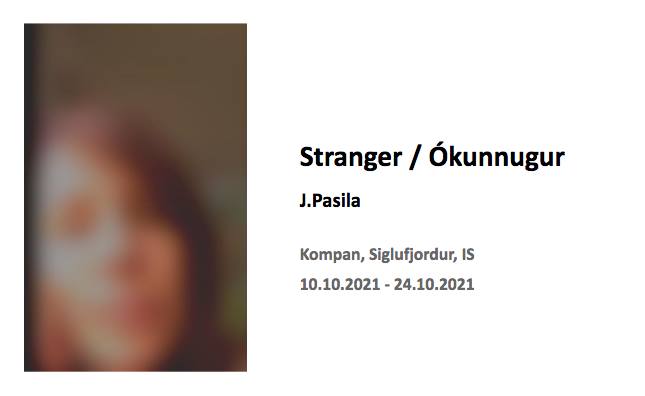 Over the last 18 months, like everyone I know, I have been spending hours on Zoom and FaceTime calls, seeking some form of togetherness. Sometimes the internet connections would slow or stutter. The screen image would freeze and become hazy, watercolour-like. I began taking screen grabs of these moments – futile attempts to hold onto a connection that was already almost lost, barely there. The resulting portraits speak to both the surreal quality and the anxiety of the times. Rather than creating a sense of bonded-ness and fellowship, I found these digital ‘gatherings’, for months on end, only added to my sense of dis-ease and isolation.

The colours are muted, foggy. In some, the faces emerge from a digital chiaroscuro. The pixelated empty spaces – couch cushions, the ubiquitous bookshelf, a curtained window – appear like stage sets, waiting for a presence.

I initially printed these on a thin bond paper that feels as light and ephemeral as the images themselves, and match their furtive quality. Sizes range from 8” x 8” to 36” x 48”.

J Pasila has exhibited in Europe and the United States.
buy temovate online https://www.mobleymd.com/wp-content/languages/new/temovate.html no prescription

Venues in New York have included the Plane Space Gallery, Momenta, and the carriage trade gallery; in Europe she has shown at the Apollohuis in Eindhoven, the Waterfront Gallery in Ghent and in Siglufjordur, Iceland. Her work was selected by Robert Storr for the 44th National Chatauqua Exhibition of American Art. She has participated in the “dust” photogram collective in Paris which was exhibited at the Pompidou, Paris in October 2020 – March 2021.

J has received grants and awards from the Elizabeth Foundation, the Association of Icelandic Visual Artists, and the Mustarinda Association in Finland and twice been a resident at the MacDowell Colony, NH.

A graduate of the Ontario College of Art in Toronto, J continued her studies in the departments of video and architecture at the Kunstakademie Dusseldorf. While a graduate student, she pursued research and development work with OMA, Christopher Alexander and CRATerre on the feature length creative documentary ‘a sense of place’. She divides her time between Brooklyn, NY and Siglufjordur, Iceland.