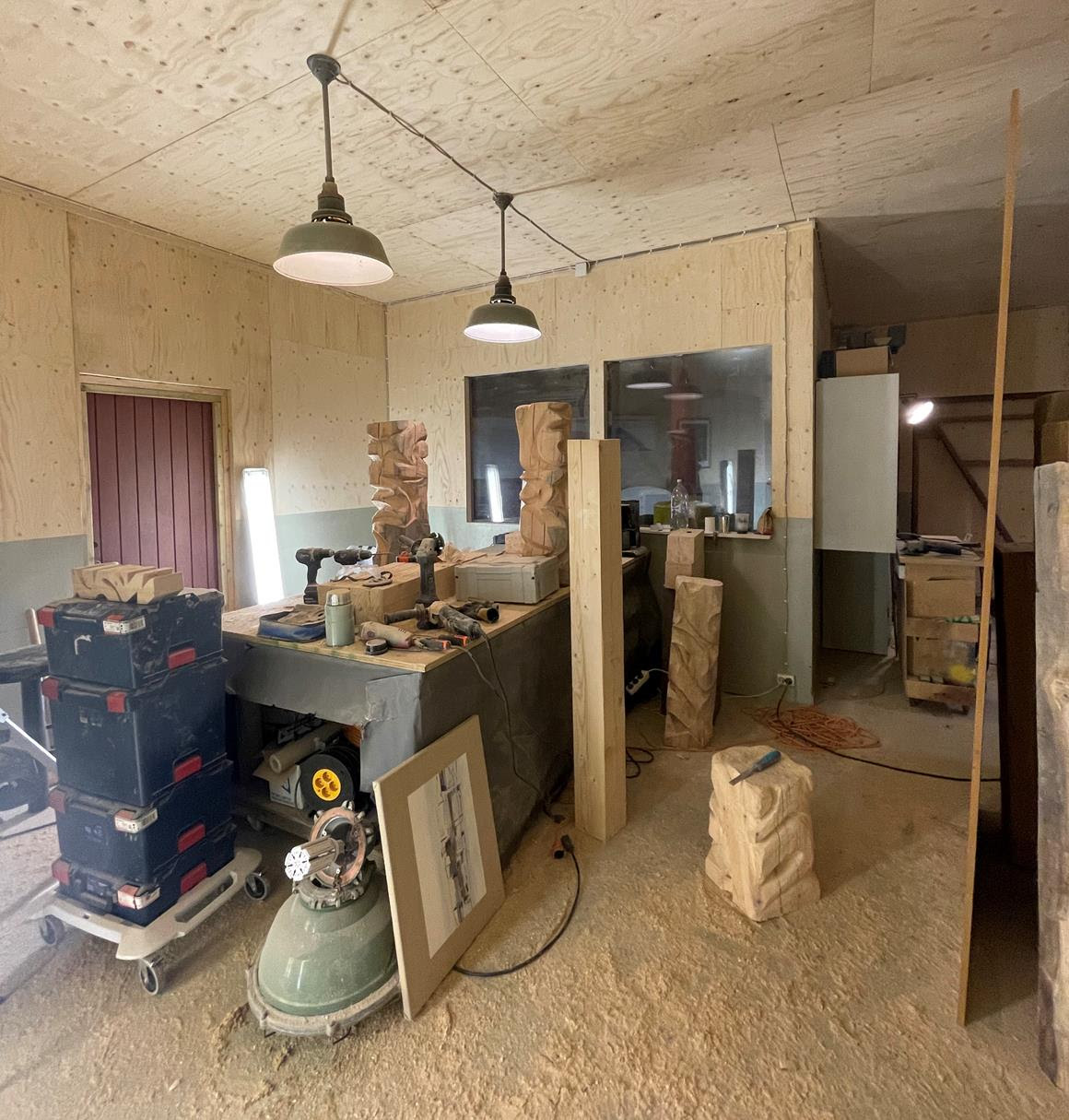 In Krot & Krass’s first solo exhibition at Hverfisgallerí, Viðarverk, the artists exhibit new sculptures made from driftwood and concrete. In addition to the artworks, Björn Loki (1991) and Elsa Jónsdóttir (1990) have also written a research paper which is published as a book work. In their work, they focus on the morphology of language, fonts, words and references, explore reading in the widest sense and examine the possibilities of communicating ideas and experience through complex systems of letters.

Recently, Krot & Krass have been preoccupied with head letters, a font that first appeared in Icelandic carvings in the 16th century. Head letters can be hard to read and has been shrouded in mystery from the start. Krot & Krass emphasise the transformation of the environment and have created numerous works in public spaces in the last decade. In recent years they have cast their ideas in sculptures and reliefs.

All of us come from the sea. We know the biology books drawings. Life originated in the ocean, but at some point the fish crawled ashore, slimy and scaly but also starving for coconuts and sunshine and other worldly goods. That’s how we came into being. We rolled upon the shore like a drunken man falling down a stair. And although it was a struggle, it also feels quite fresh to step out of the waves with saltkissed skin.

When you live on an island, this is easy to see. The ocean is the foundation of all culture. We all came from the ocean, or at least our forefathers did. Even the pigs in this country had to be shipped here. Everything travelled across the ocean. The alphabet, Christianity, monopolistic trade, break dance, yearning for sundried tomatoes. Everything washed upon the shore, in various condition. Because the sea takes its toll. Nothing gets across it undamaged. Catholicism was washy on this remote island, compared to the Vatican. Priests were allowed to get married, they could also wield swords and kill, or maybe they weren’t allowed to – but only the ocean was here to tell on them. The mainland also sent us the head letters, the famous Gothic font which became the signature font of the printing age. Except here on the island, the font was different. Some distortion happened on the voyage, or maybe it was development. Depends on how you look at it. This has been studied by the art duo Krot og krass.

However, it’s not only ideas and people that has drifted ashore here, but also various other supplies that have saved our lives. Allegedly, driftwood is excellent for building houses, and it has been used in numerous buildings here through the centuries. But maybe driftwood is only excellent material for those with no other options. It was either driftwood or no wood. It does have obvious qualities, though. It has been tossed about in the sea, breaking off gnarls and making it smooth. The sea separates the trunk from the twigs. It has also been said that the salt makes the wood last longer. Maybe we misheard that. But salt is ideal for preserving food, and life is salted cod, and in some ideological way it feels very patriotic to build your house from salted wood. Sitting in a house made of salted, sea-tossed wood offers a sense of security. If the ocean didn’t destroy it, the weather is not going to do much harm.

Even so, this is not the most fascinating thing about driftwood. That would be the drifting itself. The mysterious voyage. No one really knows how long the wood has been in the sea when it is cast ashore. There are no date stamps on the trunks. No certificates or receipts or QR-codes. Driftwood may be the only remaining completely random form of delivery in a world where everything is registered, categorised, measured and weighed. Look at them. The sea-worn, carved logs in front of you. Imagine their lives. First decades in the woods, maybe in Siberia, maybe Alaska, possibly so far into the wilderness that close by there were clandestine nuclear bomb experiments. At some point, though, they stopped being trees and became chopped down logs. That was their big trauma. Then the trip down the river, or the road or the railway track, because somehow they travelled down to the coast. Then the time in the ocean, among ice, walruses, maggots and the power of God. Then the black, Icelandic sand, beneath the terns, in the whistling, salty wind. From there to the back of a truck. A US, deliberately kitsch hotshot truck and into the studio of opinionated artists. There, they were carved and washed and refined and placed in the gallery, and you never know, the next chapter could take place in the home of a hedge fund psychopath where people play jazz and decadent board games under a crescent moon.

Look at them. They are logs, salty lumps, maybe they didn’t rise from the waves like a Bond girl but they are fresh and salty. Both washy and extremely dense. International, yet patriotic. They are pieces of work, woodwork, timbered, bedecked dudes you wouldn’t want to run into in the parking lot outside Stjörnubíó. But here we get a moment with them, on our own terms, get to smell them, breath in history.

Artist duo Krot & Krass consists of members Björn Loki (b. 1991) and Elsa Jónsdóttir (b. 1990) who have been actively working together for a decade. The duo runs a 1200 m2 studio in Gufunes, called FÚSK. They also co-own Skiltamálun Reykjavíkur which specialises in installing huge wall art for artists. Krot & Krass have taught at Iceland University of the Arts, Flateyri Folk School and Breiðholt College, and organised art and music festivals such as Buxur, Happy Festival and Gambri, Berlin.