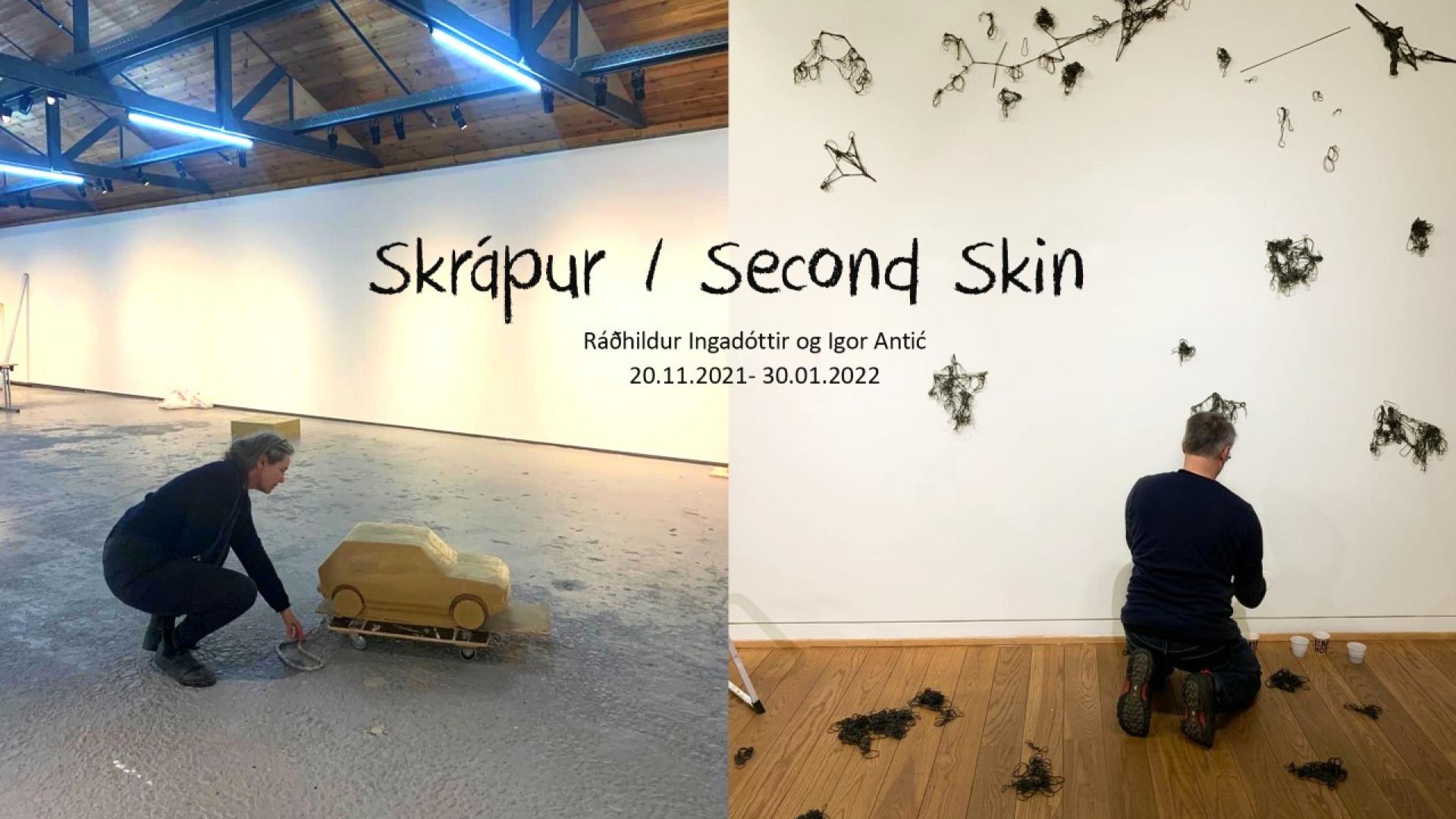 Skrápur / SecondSkin opens in Reykjanes Art Museum on the 20th of November 2021.

The exhibition tackles refugees and migration of people in the world. The title SecondSkin refers to the shelter that the body creates over time from external aggravation. The word also refers to the thick skin people develop mentally as a defence.

Both artists have discussed human displacement and conflict in their earlier works and exhibitions.

Dwelling or shelter is the frame that supports the existence of art according to the Australian philosopher Elizabeth Grosz. In her book Chaos, Territory, Art: Deleuze and the framing of the earth, from 2008, she claims that forces such as national areas frame and bring forth the quality of other things or events; It is the frame that builds up content, material for a collaborative fictional history of nations.

Were a country not bordered, there would be no territory. That would not obstruct things existing, but they would not have the same meaning and would be without independent expression capable of intensifying and transforming the living body. The demarcation of territory causes colour, texture, rhythm, mass, and weight to take on a different meaning within the boundaries of the defined territory. This makes it possible to affect people, conjure impressions that are extracted from the area, which, at best, is interpreted in the field of art.

Reykjanes Art Museum is in the vicinity of Iceland’s international airport, which makes Reykjanesbær the most populous border town in Iceland. The demographic of the town’s population is the most multi-cultural in Iceland, as 30% of residents with permanent residence in the town are foreigners, furthermore Reykjanesbær receives a significantly larger number of refugees than most other municipalities in the country.

With the community’s environment in mind, the museum director decided to produce an exhibition revolving around the idea of seeking shelter.

The exhibition is sponsored by the Visual Arts Fund.

Ráðhildur Ingadóttir (1959) works within a particular ideology in her works that she implements in various media; text, drawing, painting, sculpture, and video, often presented in multi-layered installations.

Ráðhildur has held numerous solo exhibitions, the first was in the Living Art Museum in 1986, and she has been asked to participate in group exhibitions both in Iceland and all over Europe. Works by Ráðhildur are in the collections of the National Gallery of Iceland, Reykjavik Art Museum, and the Living Art Museum. Ráðhildur has also curated several exhibitions and in 2013 and 2014 she was awarded an honorary position as the artistic director of Skaftafell – centre of visual art in East Iceland.

Ráðhildur studied fine art in England from 1981 to 1986 at Emerson College in Sussex and St Albans College of Art and Design. She was a part-time lecturer at the Icelandic College of Arts and Crafts and the Iceland Academy of the Arts from 1992-2002, in addition to being a guest teaches at the Royal Academy of Fine Art in Copenhagen. Ráðhildur was on the board for the Living Art Museum from 2000 to 2002. She has received various stipends and grants both in Iceland and in Denmark. Ráðhildur is born in Reykjavik but splits her time between Copenhagen and Seyðisfjörður.

Igor Antić (1962) explores the concepts of site-specific works, within a certain context that may be political, economic, cultural, and societal. His works appear in various media, such as photography, video, and installation.

Antić has held several solo exhibitions and been selected to participate in group exhibitions all over Europe, the United States, and Asia. He has for instance exhibited in Iceland in the Living Art Museum in the exhibition Polylogue 158 in 1999. Antić curated Values: 11th Biennial of Visual Arts in Pancevo, Serbia in 2004.

Antić studied fine art from 1984 – 1991 at Novi Sad Academy of Fine Arts in Serbia, École Nationale Supérieure des Beaux-Arts in Paris, and at the Institut des hautes Etudes en Arts Plastiques in Paris. In 1995 he founded Pokret Encounter Centre in Novi Sad, Serbia, a movement of artists during the war. Antić has received several arwards, such as the Pollock-Krasner Foundation’s Grant in New York in 2002. Antić is born in Novi Sad, Serbia, but lives and works in Paris.