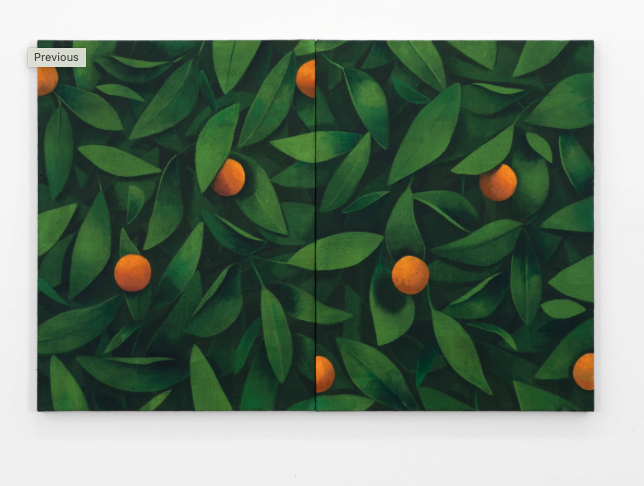 Foliage, fruit, and letters become abstracted in Mrozowski’s compositions, as the artist crops and repeats his motifs. The resulting lyrical patterning disrupts the traditional still-life and often reimagines nature with methodical order.

The repetition within the compositions is also reflected in the doubling of canvases, as seen in Mrozowski’s pendants. By masking fauna with saturated areas of color, Mrozowski provokes an optical oscillation for the viewer, as one’s mind strives to connect the two paintings into a single image. Imbued with vibrancy, the artist’s diptychs create a distorted mirroring effect that can be found throughout his practice.

In Mrozowski’s language paintings, the text acts as a disruptor to his images, similarly to the artist’s use of pattern play. The letters can be deciphered into words quickly – eyes, yes, on, no, noon – as linguistic associations become apparent. As with much of his practice, Mrozowski’s word paintings possess a digital quality, with his analog style paying subtle homage to the technology of typing, cutting, and pasting.

Ryan Mrozowski was born in 1981 in Pennsylvania, and lives and works between Hudson and Brooklyn, New York, USA. He earned his MFA from the Pratt Institute, New York, in 2005, and his BFA from the Indiana University of Pennsylvania in 2003. His work has been the subject of exhibitions at international venues including Galerie Nordenhake (Mexico City, Stockholm, Berlin), Ratio 3 (San Francisco), Hannah Hoffman Gallery (Los Angeles), Simon Lee (London) and Chapter (New York). This is his first exhibition with i8 Gallery.