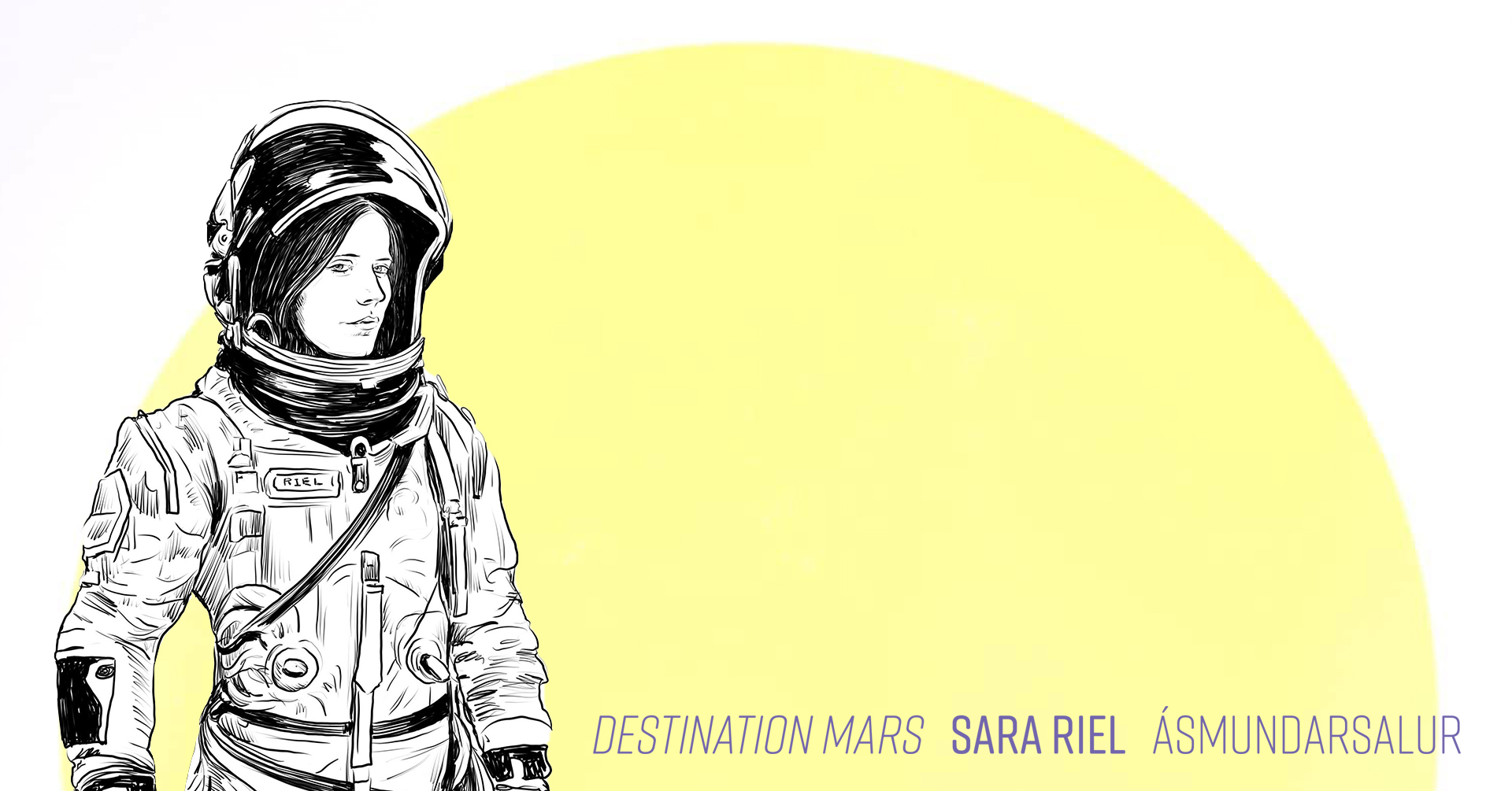 “Destination Mars is a visual journey to space from earth to Mars and back again. The artist applies a variety of techniques to address fundamental questions that touch upon origin, objective, moral and fate.

The grandiosity of human scientific achievements echo man’s smallness in space. Technocracy and belief in progress encounters mysticism and past romanticisms. Space journeys show us earth in a new light, but the consequences are that little by little it gets covered in space debris and we risk getting locked inside a self-made halo of garbage.

Despite the prevalent misunderstanding that space is the new wild west, five international agreements do exist. One of them is the Outer Space Treaty, an agreement between 129 countries, which The United Nations took into effect in 1967. According to the agreement all people are free to explore outer space. No state can claim property on nearby planets and weapons are not allowed around the Earth’s ellipse. Many things remain unclear in the agreement – for example who is responsible for the space debris left behind by states destroying the satellites of other states.

The Space Liability Convention from 1972 states that everything taken out to space must be registered in detail and that the states are liable for everything that is brought into space, from their own territory. The Convention is also unclear regarding whether private companies can start mining in space. The possibility exists that materials will be sought from nearby planets instead of mined here on Earth.

Mid November 2021 Russia launched a missile on their own satellite. The explosion caused the dispersion of more than 1500 bigger fragments and hundreds of smaller ones in the earth capsule. Seven international astronauts were in the international space station (ISS) at the time of the explosion. It caused a thick cloud of debris that the space station traversed every 90 minutes. This made the stay in the station four times more dangerous than otherwise. The use of weapons in space as in this instance, can cause a cascade effect that can be hard to unwind.

Billionaires (Musk, Bezos, Branson) have developed new types of space shuttles that make it both cheaper to travel to space and to launch private satellites. How will the billionaire’s involvement in space travel affect our attitude towards traveling in general and/or moving to space?

The United States, China and The United Arab Emirates all launched space shuttles to Mars in 2020. The objective is to investigate the planet, map it and take samples with the help of robots.

When the space jeep Perseverance landed on Mars in 2008, leading figures of NASA had written in cipher on the parachute of the jeep. The curious public quickly ciphered the message: “Dare mighty things” – a quote from Theodore Roosevelt, president of the United States at the beginning of the 20th Century. Roosevelt’s interest in natural history and forest protection is well known, as well as his establishment of a number of national parks, at the same time as he continued the expansionism of the United States.

The Hubble Space Telescope, which was launched into space in 1990 was the most powerful one until the James Webb Telescope was launched on Christmas day 2021. Scientists hope the telescope will enable the research of the genesis and origin of other planetary systems and dramatically increase the probability of finding a planet similar to Earth. James Webb spotted its first star on the 11th of February 2022.

The brightest star in the sky seen from earth is Sirius. The star is also known as Canis Major or the Dog Star. The name is derived from the Greek word Seirios that means ‘to glow’. Diverse cultures in different times all over the world have connected the star with a wolf or a dog and have considered it as a source of great wisdom and power. These ideas can be found in Stone Age communities from the beginning of civilization, among indigenous people in present times and in Western capitals. Sirius is an important star in religion and spiritual practices, as well as the centre in the semantics of secret communities and occultism to the present day.

The moon is the fastest moving celestial body in our solar system. Its cycle affects the tides, the menstrual cycle and how we humans measure time or our perception of time. Full moon is when the moon is precisely on the opposite side of the sun in its cycle around earth. This contrast that is also a pair, the ying and the yang, darkness and light, offers a space to give up and feel increased emotional flow. In spiritual practice the full moon has been a symbol of an ending of cycles, traditions and relationships.

Enok’s Book and other religious writings from the third to first century B.C.E tell about Sariel, a fallen angel. Sariel went with other angels down to earth til sleep with earthly women and to deceit and corrupt the males. The angels taught them to make weapons, armory, jewelry, cosmetics and magic. Sariel taught the motion of the celestial bodies.“

Sara Riel (b. 1980) studied art at Fjölbrautaskólinn in Breiðholt and later at the Iceland Academy of the Arts 2000-2001, and the Kunsthochschule Weißensee in Berlin 2001-2005, and a year as a Meisterschuler 2005-2006. She has gained attention for her wall paintings in Reykjavík and other cities around the world. Sara has participated in numerous exhibitions in Iceland and abroad, in smaller galleries as well as distinguished exhibition halls. Additionally she has designed album and book covers, music videos, opening sequences for television series and made illustrations for various clients.She is a member of the Icelandic Sculptors Society and has works in major art collections owned by The National museum of Iceland, The Reykjavík Art Museum and in private collections. She has been granted Official Artist salary/The State Of Iceland and been awarded grants and art prices.