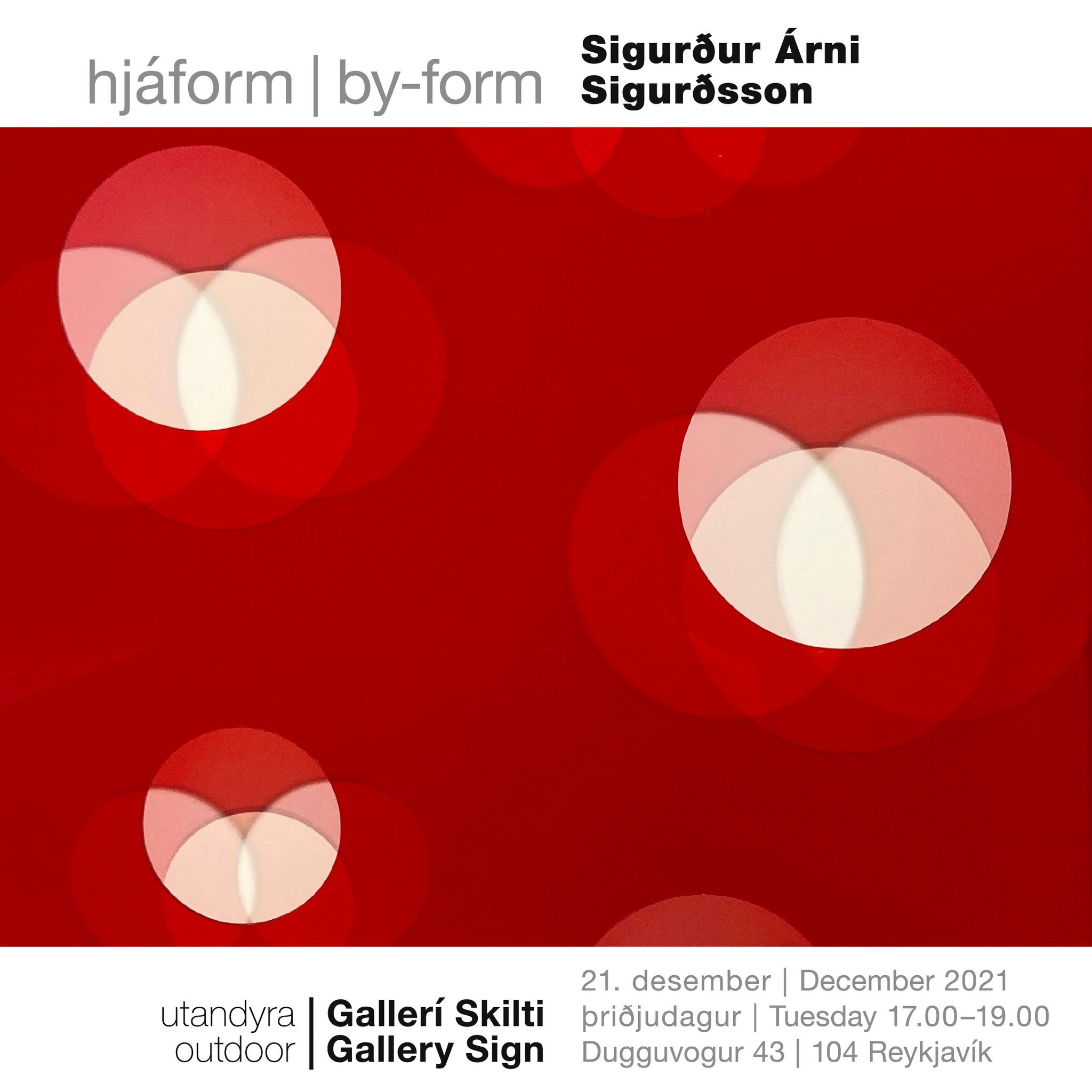 The artwork “By-form”, that Sigurður Árni shows on Gallery Sign is a lit-up plexiglass. It’s as if the sign has been enclosed inside a perforated plexiglass vitrine, casting coloured shadows onto the sign itself.

As usual the show opens at the winter solstice, the shortest day of the year 21. December and stays open until the summer solstice, in June. The work is lit day in, day out, but daylight and different seasons alter its function. Changes in light, even the lights from passing cars or the evening sun have effect and allow the work to reform and be everchanging.

Sigurður Árni has shaped the concept “by-form” in relation to his obsession with shadows. The word can be understood as an addition to a reflection, mirroring or a shadow of a material object. You could venture even further and view any painting as a byform of its subject. The byforms in Sigurður Árni’s work are either painted by him or left blank on a painted surface. They also appear in his multilayered drawings on transparent paper, in found photographs which he extends by sketching, in his photo works, book works and even sculptures and installations. The byforms come to life in the space around his aluminium, glass or Plexiglas bas-reliefs. This different approach often merges in paintings which appear as bas-reliefs or three-dimensional works which appear painted. This game of deception further expands our perception, tests the limit of what we perceive and the boundless imagination which we use to fill in the blanks. Here, the artist has started a dialogue far beyond a topical or transient landscape tradition, echoing the tradition of the painting from its beginning. Though a painting is in itself an extremely thin surface, it can portray and hint at every possible width of the physical and imaginary world.

Extract from a text by Markús Þór Andrésson, “Expanse”

Sigurður Árni Sigurðsson has been active as an artist since 1991, when he completed his studies at the Institut des Hautes Études en Art Plastiques in Paris, France. His works have been the subject of over fifty solo exhibitions and have been a part of numerable group shows. His works can be seen in the collections of all the leading art museums in Iceland, as well as in various public and private collections throughout Europe. Some of Sigurður Árni’s most prominant work has been installed in public areas such as the Sultartanga Hydroelectric Power Plant in Iceland (“Sun Wave”, 2000), the Hlíð Care home in Akureyri, Iceland (“Ljós í skugga”, 2006), the National Bank of Iceland in Reykjavik (“Samhengi”, 2004), and the town of Loupian in the south of France (“L’Eloge de la Nature”, 2011). Sigurður Árni represented Iceland at the 1999 Venice Biennale, and in 2000, when Reykjavik was a European Capital of Culture, one of his works was chosen as the culture year’s emblem and last year an exhibition of Sigurður Árni’s works was opened, reviewing the artist’s career from the beginning to the present day at the Reykjavík Art Museum.