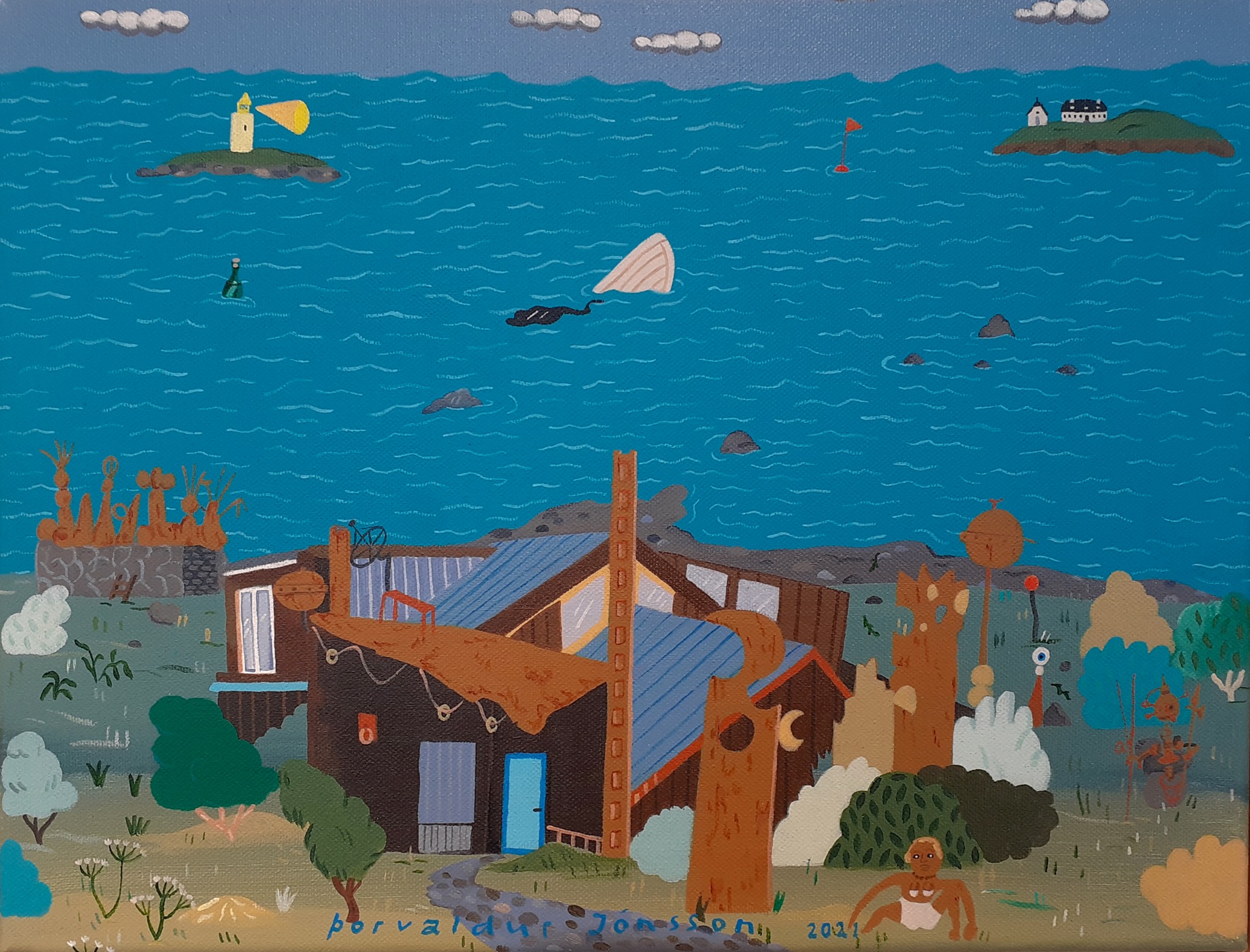 A home and a house are not the same. A home is not an object. Similarly, a work of art does not consist of tangibility by itself. Memories, our personal rituals, and habits leave their marks on a space, which will eventually become a home. On the intersection of the past and future, a home is created, little by little, only with time. The spirit of the house is born.

The spirit of a house still remains nothing but the reflection of the characters that habituate it. A staged performance of personal memory. One could even view the home as a communication device towards the outside world, a mirrored view of one’s self. In this exhibition, you will find the dwellings of twenty-two artists, as portrayed by the artist Þorvaldur Jónsson, his portraiture of their reflections of themselves. The works set themselves apart from his earlier work, as they are completely devoid of any human or animal life, slowly leading the audience into the quiet, yet forbidden moments of entering another person’s home without its resident. The results are small mysteries, enigmatic portraits, that sometimes may only consist of a mundane work tool, perhaps a swimming pool or a doorframe.

The exhibition’s title can be traced back to the late French folk-artist and postman Ferdinand Cheval, who spent the better part of his life collecting stones in the small town of Hautierives. Little by little, his collection of stones started to take unusual form, resulting in his magnum opus, the architectural achievement of Palais Idéal. Pebble by pebble, he built a ten-meter-high chateau over the course of thirty-four years, without any specific education or assistance. On one side of the building, the artists’ mantra is written “The work of one man”, seeking inspiration from the notorious Napoleon Bonaparte, who had famously stated that nothing was impossible. Another side of the building states “With this rock, I wanted to prove what willpower can achieve.”

From stones, he carved small cherubs, various figures reminiscent of Hindu Gods, Egyptian mummies, and gargoyles. Everything that captured the man’s attention, his worldview gathered in one place. It is nonetheless worth noting that his construction days did not come uncriticized by his French contemporaries, quite the opposite. Later though, he would soon become a surrealist icon in his own right, and become a source of great inspiration to renowned artists such as Pablo Picasso, André Breton, Max Ernst, and now, Þorvaldur Jónsson.

Upon closer inspection, further similarities between Jónsson and Cheval can be detected. Jónsson carves out the delicate, yet sometimes mundane, moments of everyday life, usually set far away from urban city landscapes, although the remains of modern life can be seen sprawled across each work, a record player or the powder of a smoking gun on the ground. The use of contemporary memorabilia starts to create an ambiguous mise-en-scéne, leaving this exhibition as no exception, where he allows chosen artifacts and constructions to tell the life story of each artist, honoring their lives work, and personal narrative. Writers, visual artists, architects, filmmakers, and bohemians become the telling structures of his exhibition, resulting in an investigative array of creatives. Furthermore, he examines the circumstance and allowance that each artist carried through their careers, often reflective of the reigning zeitgeist within society and governing outlook towards their work. Some have received palatial housing through public funds, meanwhile, others have had to make do with nature or simply an automobile. Last but not least, we come across the inevitable extension of the artist-self in architectural form, the personal side-product of what it means to be creative, various in size and form, bustling with innovation and integrity.

Þorvaldur Jónsson (b. 1984) graduated from the Icelandic Academy of the Arts in 2009 and has since exhibited widely, both in Iceland and abroad, predominantly in Germany, China, and Turkey. His work has been featured in the museum exhibitions of the Reykjavík Art Museum, Gerðarsafn Kópavogur Art Museum, Hafnarborg museum, the Akureyri Art Museum, and the Icelandic Folk and Outsider Art Museum, to name a few. Jónsson is one of the founders of the artist-run gallery space Gallery Port on Laugavegur.