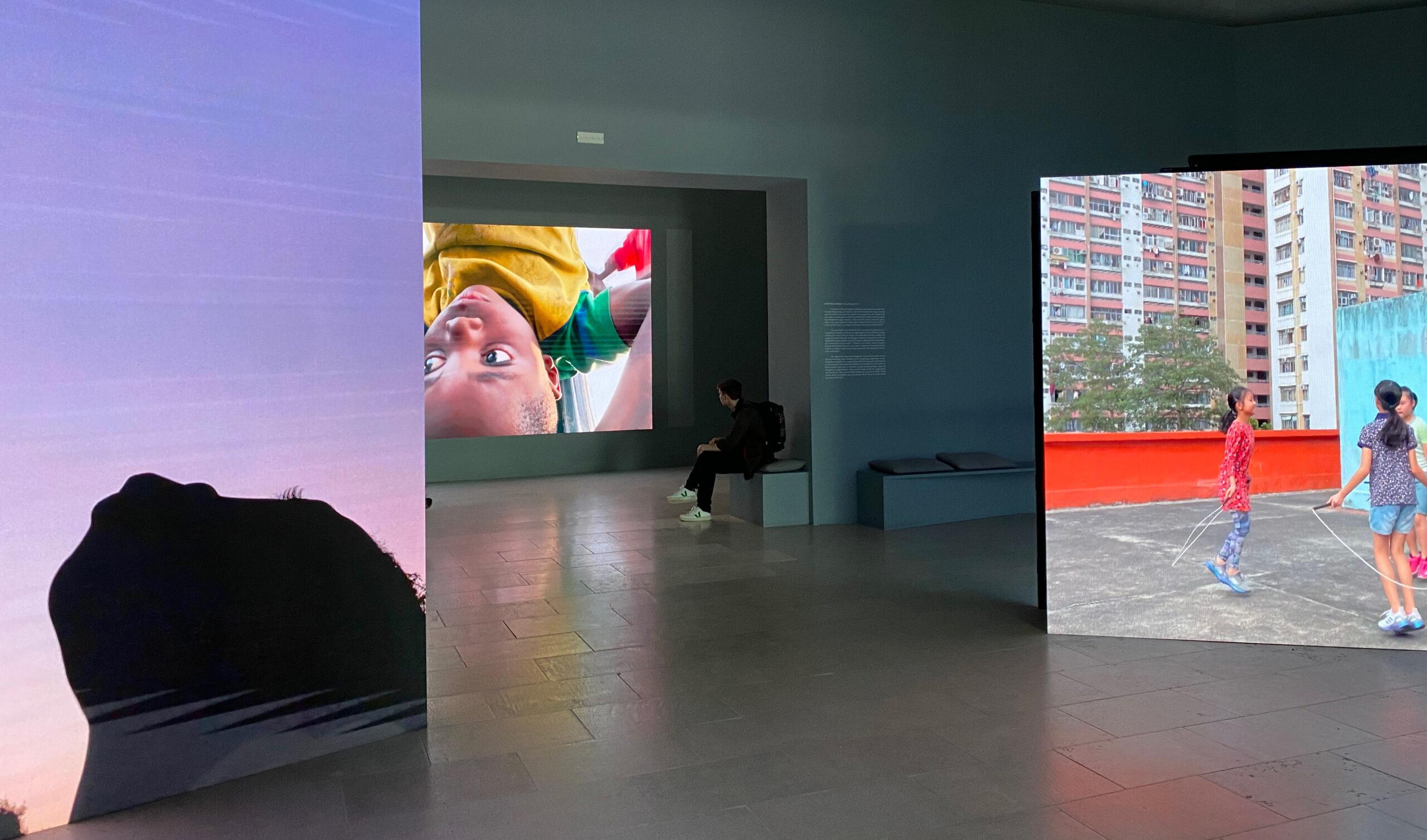 In recent decades fine arts has become more open to various art mediums, much like cinema which can incorporate many mediums in one film. Fittingly this year’s Biennale Arte: The 59th International Art Exhibition contains many video installations, all of them varying and testing the multiple ways in which cinema or video can belong within the frameworks of fine arts. At the biennale the ciné-videos span from pieces under a minute to feature length films. Some of them form a sculpture, some add to the ambience of other work, some are interactive and others follow the traditions of film narrative. I couldn’t help but wonder whether the medium is always fit for people who are passing through to look at Art.

One of the first rooms one enters in the main exhibition, The Milk of Dreams (it. Latte di Sogni), in Giardini, curated by Cecilia Alemani, is The Witch’s Cradle. The room, much like the biennale this year, praises female artists, many of whom fall under the category of surrealism or a cousin of hers (experimentalism, absurdism, magic realism etc). The Witch’s Cradle (1943) is titled after a Maya Deren film exhibited in the room amongst Mary Wigman’s Hexentanz (1930) and Josephine Baker’s Dans Revue des Folies Bergére, danse avec plumes… (1925). The title film of the room is placed holily high, like any fine depiction of Christ, slightly above comfortable eye level. The 12 min piece is placed in such a manner viewers are encouraged to acknowledge it and move on without engagement. It is an odd choice, making a 12 min piece less desirable to its audience. But then again maybe its faint presence and iconic name is the sole role of the piece, not its content. Fret not – Deren’s films are available on Youtube and The Witch’s Cradle is exhibited in a manner for viewing at the Peggy Guggenheim Collection. Baker’s and Wigman’s contributions at La Biennale are however placed in direct eyeline of viewers and at the length of two and under one minutes – serving the audience historical bite sizes of cinema. The films are placed in this room less for ones viewing pleasure and more as signifiers. The message is simple even if the audience is not familiar with the cultural significance of Deren, Baker or Wigman: Women founded the surrealist cinema.

Having addressed cinema’s history, we move on to The Icelandic Pavilion’s video installation and its use of the medium. Perpetual Motion (2022) by Sigurður Guðjónsson takes on the form of a moving sculpture, accompanied with a soundscape composed by the artist himself and Valgeir Sigurðsson. Its 45 min loop has high and low notes, both in more dramatic visuals and louder dronelike bass. The metal dust sometimes stretches over the entire plate on which the video is projected and sometimes only slightly covering the line which the dust is magnetically stuck to. The same goes for the soundscape, striking the walls with its vibration of bass at times or hardly distinguishable, like a murmur. Apart from the highs and lows of the piece, it is without a linear story. Without a direct message or one single meaning, the piece is left for the audience themselves to interpret. Some see ashes from a volcano, others moss, some see ice. Perhaps because the piece is without any political agenda, viewers seek to make the work represent its country’s nature – the Icelandic identity. While others simply get lost in the piece’s meditative qualities.

This form of video sculptures is also seen in other pavilions. For example in the exhibition The Importance of the Origin Will Be Imported by the Origin of the Substance by Mónica Heller, the Argentinian pavilion has a roaming eye projected on a ball hanging above other video-works. Video sculptures use the medium for its movement –  moving sculptures are more lifelike than the traditional ones. Using cinema in its simplest form, much like the filmmakers and dancers of early surrealist cinema.

A similar level of video dominance is found within the Belgian pavilion, The Nature of the Game (1999 – 2022) by Francis Alÿs, which displays different childhood games. The games vary from each country; a snail-race from Belgium, a game of killing mosquitoes from Congo, a version of jump rope from Hong Kong, or a game from Mexico where kids shoot each other with sunbeams from glass reflection. The videos span from roughly two to nine minutes long, with texts accompanying each video explaining the charm and outlines of each game. The simplicity of the exhibition makes it easily understood, relying on the text for support but not too heavily, it is easy to digest. The installation of these videos vary, some are placed in a classic viewing room, others simply projected on a wall and in the middle of the room are four large screens. The passiveness of the viewers (which cinema has so often been critiqued for) is somewhat demolished as the installation makes one feel as if in the same space with these children playing. Children playing tend to evoke soft emotions, it’s simple and effective. The video experience is immersive making the pavilion memorable. Unlike the video sculptures there consists a narrative within these videos, although it is not a full story nor does the content initiate a conversation. The videos are charming, much so that the audience is tempted to feel the universality of innocence and play. Yet there is a difference of play depending on the country. The accessible length of text and video makes it so that the exhibition does not address this difference which is present in the videos. This perfectly depicts how efficient simplicity can sometimes render a work shallow. However, this form of display can work beautifully with a less culturally diverse/loaded subject. This format of display, like the previous  video-sculptures, fits into the biennale’s tempo of passing through, stopping where you seem fit or are intrigued. We as viewers of art or film, furthermore as guests of La Biennale, are greedy with our time. A few have the stamina of watching five hour long slow burn films, yet many binge-watch seasons like they have been training for it their whole lives.

With the complex phenomenon of viewer stamina in mind the New Zealand pavilion, Paradise Camp by Yuki Kihara, takes their roughly one hour and twenty-minute film and divides it into five sections. The series often resembles queer reality tv both visually and in its dialog, but within the premise of a talkshow. By dividing the video into five sections the piece leaves it to both luck and determination of the audience to enter and stay within a specific timeframe. It is an attempt of  fitting the series ever so slightly to the art exhibition format, of passing through, without compromising the narrative nature of their work.

It is a worthy shot, viewed by few in full length and in parts by many, but the video piece could not have stood alone. The exhibition’s main theme is addressing the colonial heritage within art history, while weaving in the topics of gender, sexual politics and environmental issues. Although arguably, and as the exhibition points out, these issues are inseparable from colonialism. Still, it is a mouthful of political topics which the exhibition magically manages to pull off, partly due to multimedia; exhibiting both photos, documents, models and video. (The video is only available on site)

In my search of finding the “correct” display of the film medium within La Biennale, I have come to find that a projection of simplistic narrative can be so naive that it discredits itself. But also that heavy or political narrative tends to fail on delivering the point by losing the focus of viewers. An odd display can make you either miss the film or leave you with the feeling of having missed the point. On the other hand a preference for video sculptures could lie in their vagueness, their both lazy and genius “decide for yourself” approach can lend a false depth to a piece.

There are also a few feature length films exhibited this year at the biennale – I try to imagine over an hour of material fitting the roaming nature of the biennale/exhibitions. If I imagine a nonlinear visual fiesta, the imagery is either strung together with meditative movement of objects or a similarity of moving images, thus falling into the category of video sculptures.  Another form of a lengthy film fitting into exhibitions is stringing together shorter clips of video, clung together by theme not narrative, like poems or short stories in a collection. Not unlike the Belgian pavilion. However, when a film relies heavily on narrative or topic, I have yet to see a lengthy film which is better fit for the white cube than the silver screen. Perhaps we are just on the brink of a new way of using the film medium, better fit for the attention span of the modern man and the nature of walking through an exhibition.

LIGHTROOM by Sigurður Guðjónsson on show at Regelbau 411