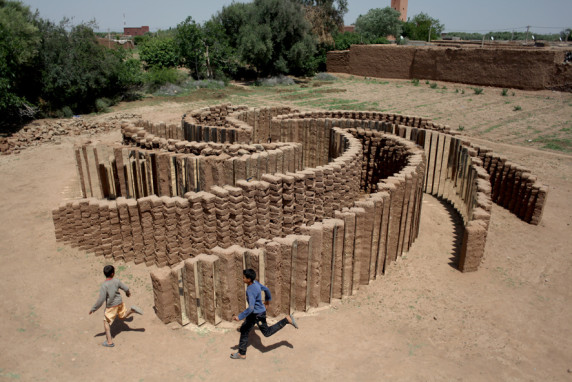 Elín Hansdóttir is one hard working artist I’ve come to find out, after interviewing her and researching her work over the past few months. It was only just last night, while watching the new art docu-series ‘Opnun’, that featured her on television, that I was reminded once again of her relentless creative quest for new viewpoints. She started the year off by receiving the Icelandic Optimism Award from the president, as well as being recently nominated for the DV Culture Prize in Reykjavík. Her shows ‘Simulacra’ and ‘Disruption’ last year came with rave reviews, taking the her visitors on a hunt for the surreal, new perceptions and peculiarity. She has exhibited widely in Europe as well as the US, in addition to having held eight solo exhibitions here in Iceland, therefore I was pleased and thankful to be able to get a few questions in with this busy artist.

Compliments on your award and thank you for sitting down for this, it’s safe to say that you’ve been having a busy past few months! If we just start from the beginning, how would you say your interest in gravity, logic and what the eye can detect came to be?

At the same time as being fascinated by the perception of the human body, it’s awe-inspiring to think about the limits of our solar system and the connections between macro- and microcosms. If you add the element of time into your bank of interest, there´s quite a lot interesting concepts to take from. I’m mesmerized by existence in general, these are the grounds that I work from, all according to my own experience of course.

Does your work imply a scientific approach, as some might detect references to nature and the use of biological knowledge in your work? In addition, do emotions come into play when you create and do you think an artist needs to choose between these two elements, the rational and the playful?

My work isn’t  in any way scientific, although it might be inspired by science, on a more poetic level. I make work based on my own experience and emotions, these are a crucial compass when looking for a topic. But I´m more interested in the human condition in general, looking at my own experience from a distance, rather than exposing my personal emotions in a direct manner. Rational thinking is probably not the greatest recipe for invention, but I´m not sure logic and play should be juxtaposed as opposites, they interconnect in so many ways.

Seeing as how a lot of the work is based around a viewer’s perception and participation, do you test it out on people, collaborate in some ways with others while the work is being created?

I don’t think I would ever test things out on people, the thrill is not to know, not being in control of people’s reactions and witnessing the unforeseen consequences of the work. The aim is not necessarily to please people, but to create an unexpected experience, which might cast a new light on how we perceive the world.

Your art also seems to have the distinctive features of curiosity, or the need to see something new. Do you think the growing need for new information, constant entertainment and our easy access to it is influencing the way we view and approach art?

I think of my working process as some kind of a curiosity quest, it´s an inexhaustible investigation into the enigma of truth. There is no answer, even if there is one, it´s probably beyond our capacity to comprehend. It’s interesting to question the role of art as a commodity. Ever since the fifties our Western consumer society has certainly used “experience” as a marketing strategy. But I believe that culture can be a counterweight to the predominant ideas that our capitalistic society lives by and we should use our experience as a tool to question the norm.

Horror fiction is another theme you’ve recently been in connection with. The Living Art Museum put on the show The Primal Shelter is the Site for Primal Fears, featuring some of your work in 2016, looking at fear and horror in relation to spatiality and psychological triggers. Are you a big horror person yourself? Would you consider yourself a storyteller?

I don’t watch horror movies, but I love them from a distance! I am more interested in horror theory and interpretations of horror movies, rather than the thrill of watching them. But what is great about horror is that it deals with the uncanny, the unexplored presence of place and the imagination of the human brain. I don´t think I´m much of a storyteller, but I am interested in creating situations that spark people´s inventiveness and creation of their own narratives.

You were based in Berlin for many years, is there a difference in being an artist in Berlin and Reykjavík? What makes a place a home to you and what is a regular day like for you?

The difference between Berlin and Reykjavik is 2.8 million people…..which widens the scope of perspectives and voices quite a lot ! But the contrast between these two places is not so vast. Sometimes I feel I work better in Iceland because there´s less distraction. There is a lot of creative energy in Iceland, but there might be more critical thinking in Berlin. A little bit of both is perfect.

What excites you about the future and what is next for you?

In the big picture, what excites me about the future is living life attentively and although it might sound a bit sombre, I hope to mature towards embracing death as part of that cycle. But on a smaller scale, I look forward to eating the next ice-cream with my son.

And I agree and would like to thank Elín for her answers, an ice-cream is always something to look forward to!