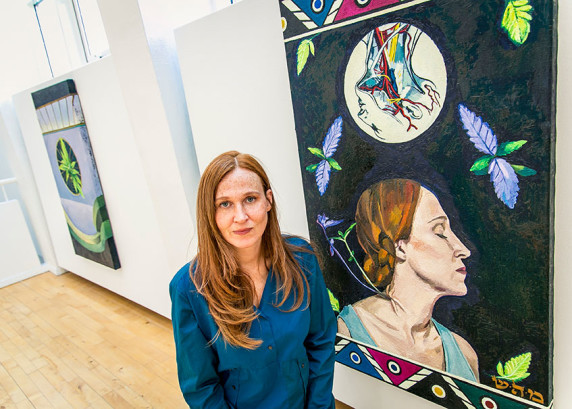 We were fortunate enough to encounter some amazing artists on our trip to Berlin recently, including our next interviewee, Erla S. Haraldsdóttir. She lives and works in the city, doing paintings, animation, videos, and photomontage that appropriate and restructure reality.

How long have you been working in Berlin and what’s your experience of working as an artist there? What’s the best thing about this city? Is it very different from Sweden where you were based before?

I have worked in Berlin for the past 11 years. My reason for moving to Berlin was to participate in a studio program of Kuenstlerhaus Bethanien in 2005 – 2006.  However I have not been entirely in Berlin during those 11 years, because I was a guest professor in Umea Academy of fine Arts in Sweden the years 2011 – 2015 supervising BFA students. At the same time being based in Berlin, meant traveling back and forth.

The best thing about Berlin (apart from being quite affordable for struggling artists) is its fertile ground/ soil (metaphorically speaking) for all kind of arts to flourish. For decades, Berlin seemed to have a positive effect on artists; its atmosphere is welcoming, open and allowing. There are diverse art scenes, many of international artists coming and going. I like, while being buried in work in the studio, knowing about the amazing art out there that is easy to access. I like to live in a city where one can bike to a museum and see the latest show by William Kentridge on a Sunday afternoon, drop by another museum to look at paintings by Caspar David Friedrich, and in the evening listen to a lecture about African contemporary at a nonprofit art institution. I also like that one can shop for inexpensive food, have fabulous bio ice cream, get the best oil paint on earth and order large stretched canvases from a small local art supply store.

Sweden possesses fertile ground for visual artists. Lots of governmental funding is allocated to the arts. In Sweden art has a place of prominence in society.  I think that there are so many fantastic artists in Sweden, and am surprised that so few gain international recognition.  This leads me to believe that the art, which is made in Sweden, tends to stay in Sweden, I have no idea why. I have the impression that the art world in Sweden has a tendency to be a bit didactic and monocultural.

You base your artwork a lot on a method you call the ,,Freedom of restraint”, where you exchange instructions with other artists as well as creating your own. In your own words, what about this methodology fascinates you and can you tell me a bit more about it?

I find it to be very difficult to commence working on new projects, and have a tendency to get stuck, so I have come up with a set of rules and restrictions in order to make it easier get into a process. This can consist of simple tasks that I give to myself, or collaboration with others, most often in the form of tasks that I receive from other artists. For instance a guideline can be: ”Make seven paintings, in the size of 90 x 150 cm, use the text from ”Genesis” from the first book of Moses as your starting point”.  Then when I’m in the process of making and doing, I get more and more into the lovely details. I love being deep in a process in my studio. Right now I’m buried into painting, and have been doing that primarily for the last 6 -7 years. For me painting is physical, and requires a daily ”working on” which leads to focus and endurance.

20 years ago, I was studying at San Francisco Art Institute. At the time I was a teaching assistant for a professor who shared with all his teaching methods, I came across some these methods that I could use in my artistic process. (See Haraldsdottir ”A two by four and a shoe box” in Difficulty of Freedom / Freedom of Difficulty” Crymogea, Reykjavik, 2014.)

I often work at one project at a time. Generally speaking there tends to be a ”system” behind every project. While in the process of working new ideas come up. For me it is in the midst of the process where the work becomes interesting. (See A conversation between Jonatan Habib Engqvist and Erla S. Haraldsdóttir  ”The Veracity of Colour ” in “Make a Painting Of Trees Growing in a Forest” Crymogea, Reykjavik, 2016.)

The methods I use is like making my own architecture / space for the work to be created with in. Right now I’m painting a lot, for several hours a day. During this painting mode, writing doesn’t come easy.  It is all about the painting, the colors and thinking through painting.

Here I would like to quote William Blake “I must create a system, or be enslaved by another man’s. I will not reason and compare: my business is to create.”

And I also here a favorite quote from Raymond Queneau: ”Become a rat who yourself builds the maze from which you set out to escape”.

In one of your books you mention the French literary group Oulipo as a source of inspiration as well as artist Sophie Calle. Any others? For example Keri Smith pops straight into my mind in this aspect, with her popular best selling simple instructional books. And there seems to be a shift towards art becoming a tool, not just for artists, but for anyone to use.  Do you hope that your work inspires others to research their own lives in some way?

Other artists that use instructions, rules and restrictions as methods for making art are for instance, William Kentridge, Allan Kaprow, Yoko Ono, Filmmakers like Lars Von Trier.

I agree that there seems to be a shift towards art becoming a tool. Perhaps analogous to recent developments in the field of psychology, where there is a shift from Freud’s methods of psychoanalysis to a more cognitive behaviorism with a focus on ”how to” tackle life, rather then spending years of digging into the personal past. I somehow think the ”how to” approach is more effective and giving. My opinion is that if more children and young adults would be given an education along with the technical skills involved in art making, there would be less problems in the world.

In your past work you’ve collaborated with other artists, creating constrictive guidelines for them to work with and vice versa. Do you consider these rules you make as part of the artwork or would you consider them as just a tool to get the final result, a painting perhaps, and that’s what matters the most? Is it equally important for you to create guidelines for others as it is for you to receive them?

I think the tasks and the guidelines themselves are entirely provisional, and therefore less important then the final result! It is the final result that is the object of importance here; the task is just a way to get into the making of the artwork.

In your previous work ‘Here, There and Everywhere’ you have created digitally altered cultural environments, where reality and imagination blend and become one. Can you tell me about the ideology behind it?

The idea came to me when I was studying at the SFAI in 1997. I in those years I was very interested in site specific photomontage, and also site specific video installations.

Anyway, I walked through China Town everyday, on my way to school, and what struck me was that all the loose elements on the surface of the architecture that made China Town look like China Town, not the architecture itself. The same was with Kreuzberg in Berlin, where all the Turks were living, it was their storefronts, vegetable stands, casinos and corner stores that created the Turkish atmosphere, not the architecture. So Bo Melin, collaborator for the series ”Here, there and everywhere”, and myself, decided to make a photomontage of Reykjavik and transform it into a city with multicultural neighborhoods, a China Town where Landsbankin is, a Kreuzberg esque neighborhood at Skolavörðustigur. To create the impression of a Mission District neighborhood, just like the one in San Francisco transplanted on Bankastræti.

We had some guidelines, for instance each photo had to contain a landmark, and all the photos should be taken in daylight. Additionally the camera was held at a particular height, because we wanted the photographs to look like panorama snapshots. It was crazy many hours in front of Photoshop; it was like a ”Photoshop from hell” kind of project.

I read that you considered your paintings to be without beginnings or endings that they just exist. “Paintings continue breathing after you’ve stopped painting them, due to their three-dimensionality.” Can you explain that a little further? Would you go so far as to say that the same applies for you video works as well, because they keep getting played, or do you think different rules apply for different mediums? Do you have a preferred medium at this point?

Hmm, it is complicated, because it is so abstract with painting. The thing with a painting that keeps breathing, has to do with how you can be ”struck” by a painting when experiencing it in real life! I think that a painting in real life can never be equated with looking at a jpg on a screen of the same image. A painting has to be experienced.  Therefore museums and art institutions are so important for culture. To look at a good painting at a museum, for instance a De Koonig painting could induce your heart to beat faster and give you a strange feeling in your chest, as you became weak in your knees. Just as a Rothko painting could make you want to cry, and an Edward Hopper would make you want to dig deep into the night…it is a well documented and proven that paintings have this effect on people. The selfsame event can happen when listening to music. How can one describe it? It is totally abstract, you cannot tell why. Videos and photos can be looked on at a computer, YouTube, vimeo. I hate it when art is looking better on the computer screen then installed in real life. It is totally much better to experience a good video installation at a museum, or a gallery then on the computer screen.

What’s coming up next for you? What are you working on at the moment?

I’m working on a series of seven figurative paintings, chock full of art historical references, that will be shown at Hallgrimskirkja in Reykjavik, opening 4 September 2016. The series is an appropriation of ”The Genesis” drawings from ”Islenska Teiknibokin”. Then I’m also working on more abstract painting series that I will show at Galleri Konstepidemin in Göteborg that opens on 26th November. Then there is a commission for a collector in NYC, along with other projects. But I’m fortunate to paint full time these days, and I love it.

We thank Erla for taking her time to chat and look forward to experiencing her upcoming exhibitions.