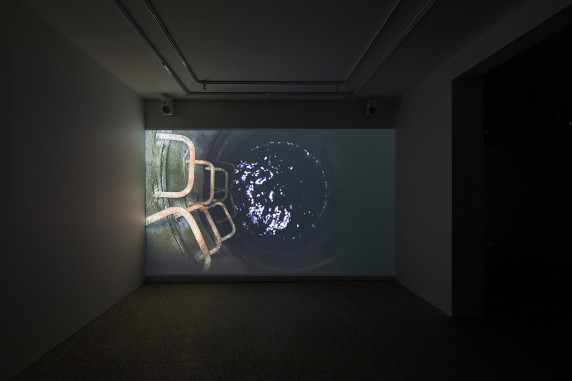 Sigurður Guðjónsson’s dark and mysterious works exploit many variations of time based media. Using mainly video, his work could very well be classified simultaneously as musical works. His work has been featured in numerous shows all over the world and he has now joined Reykjavik’s newest gallery BERG Contemporary, where he will open his new show today. He was gracious enough to let me catch a sneak peek inside his new works and experiments.
Can you tell me a bit about the show opening later today? What can we expect? What are your thoughts on having joined BERG Contemporary as an artist?

BERG Contemporary is a great addition to the Icelandic art scene and I´m honoured to be one of their current artists. My upcoming show is a video installation where sound is the counterpoint. It consists of three new videos (AV Machine, Tape, and Well) and soundscapes where I´m using machinery, man-made infrastructure, and technological relics as materials for the videos. They are looping sequences with only a single moving element in each shot. I’ve been thinking a lot about these old devices and found it interesting to experiment with the functionality of the objects in a new context.

Where does your inspiration come from and how do most of your works come to be?

I think of my exhibitions as installations and when I get into a new museum or exhibition space, I often start to figure out how I want the installation to look. It’s never the same and it’s a huge part of the process of creating an exhibition.  Sound and visuals are somehow intertwined and inseparable in my mind. I am also very much inspired by my everyday surroundings and the environment. I like to do experiments and am in a sense driven by my curiosity about technology. I guess I like to find new functionalities of things and play around with my camera. Often a certain location gets me going, and then I record the visual world and the ambient sounds of the location. On the other hand, my inner world plays an important part too. I’ve often been inspired by dreams or images that I see when I’m in that state of consciousness somewhere between waking and sleeping.

You’ve been working with musicians a lot lately, and throughout your work. Can you tell me more about why you feel that music is an important element? You have a connection with the metal scene, am I right? (I remember for example a fantastic piece I saw in 2009 at the beginning of the Sequences festival, where you collaborated with a heavy metal band.)

I’ve always worked with musicians in one way or another. To begin with, I collaborated with various musicians to work on scores for my already finished videos, but in the last few years I’ve met up with contemporary composers like Anna Thorvaldsdottir, for example, and we’ve started a conversation in order to create a world of visuals with a score. It’s been a very challenging and inspiring process to work from scratch with another artist on new projects and it’s a rewarding process because it doesn’t happen without facing challenges in every step.

Very often the sounds that I find within a space create the setting, influencing other formal and aesthetic qualities, while at other times the atmosphere, in all its sensory aspects, drives a work forward. I guess it makes sense somehow that I work with other musicians, and you’re right about my connection to the metal scene. I started out as a guitarist in a death metal band as a teenager; at the same time, I started painting and experimenting with 8mm films. I would say that sound is as important as the visual in my art.

How or when did you realize that you were a visual artist or that video art was something you wanted to do?

When I was a teenager, my father suggested randomly that I should go down to the basement and paint. He was a jazz drummer and a hobby painter – I guess I was influenced by him, and also I immediately enjoyed painting. When I entered the Icelandic Academy of Art in 2000, I spent a whole year drawing and making sketches before they opened up the video lab. At one point, I found that I could compose music and make videos that match, and that’s when I thought, ‘This is really it for me!’

In descriptions of your work I’ve noticed that the viewer’s personal perception seems to play a big part in the works. Do you consider them as spiritual or existential works?

It’s true – the audience and their perception play a key role in my work. I put my vision into the space – I put what I see or perceive on tape and invite the audience in. So it’s really up to the audience if they happen to have a spiritual experience or interpret my work as existential. What they receive is very much out of my control, luckily.

What I’ve come to notice over the years is that your narrative has changed in some ways, becoming visually simpler, sometimes focusing more on repetition, with fewer traditional characters and less of a linear story. The works ‘Edda’ (2013) and ‘Bleak’ (2006) strike me as good examples of these differences. Do you feel that your work has changed? Or perhaps the way you work?

I guess the change in my work might have to do with the fact that in the last few years I’ve been looking more and more into what one perceives physically in the space. Earlier my work was made largely in the editing process, where fragments were gathered together on the timeline in order to create a linear or non-linear narrative that was displayed on one screen as a movie. In my latest work, one can say that I am cutting the pieces directly into the space and playing with how the viewer goes through and connects. I’m digging more into each image, filming organically – rather long shots from around 6 to 10 minutes – and when they’re put into a performance they loop so people can see the whole video. The time element and the function of each shot is crucial and there is always a certain transformation that occurs in the work.

I would like to thank Sigurður for his time and insight and recommend to anyone that they further immerse themselves in to his unique world at 5pm at BERG Contemporary today.

All photos courtesy of Sigurður Guðjónsson and BERG Contemporary.