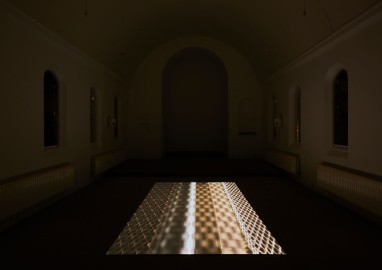 Last February you have been awarded the Icelandic Art Prize 2018 for the exhibition Inlight, which was on show last year from late September until the middle of October in the chapel and morgue of the former St. Joseph’s Hospital in Hafnarfjörður, congratulations on that! Were you expecting to get such a positive feedback on that show? What do you think about the Icelandic Art Prize? Do you think it could be a good input for Icelandic artists?

Of course, you always aim to do your best, but it comes with gratitude when things work out, especially within such a fragile process that creating can be and it certainly doesn’t hurt when you receive positive feedback on it. When I started, I really did not expect anything, because the focus was all on creating the works and finding a showroom in collaboration with the ASÍ’s Art Museum. It’s therefore safe to say that the receival of the work went far beyond the brightest hopes and that the recognition was very appreciated. There is enormous growth in Icelandic art and it is important to support it and make the field itself visible, and therefore I welcome the Icelandic Art Prize. It is always fun to reap what you sow and get encouragement, and to celebrate what’s happening to others and while we have prizes for literature, theatre, music and film, of course there ought to be an Icelandic art prize.

A hospital is an unusual space for a show, and a morgue in particular is a very suggestive place, even when it is disused. How do you think that influenced your exhibition at St. Joseph’s Hospital?

It is always fascinating to exhibit in a space that is not usually used for shows, it’s super effective for the creative process and you start to think differently which takes you in new directions. In this case, I chose the place as part of the work so it has equally as much importance as the work itself, to create this interplay between the medium and the space. The chapel and the morgue has a story that is a certain extra layer that adds to the work, as well as the space itself, which offers new possibilities in the presentation of video. It may be said that the show has been an attempt to activate this space and the place in its entirety and make it spark.

Your exhibitions are usually placed in dark spaces, is that just a technical need for your works, a way to highlight the videos, or is there some other reason behind this choice?

The reason for the darkened space comes first and foremost out of technical reasons, so the result will be the best. However, technology is always getting better every year, so I expected to be able to show my works in a less darkened space, but when I did some experiments with it, it was like something was missing. It is always fascinating to walk into this darkened space with the light from the projector resonating from the screen and you also experience sound in a different way within a darkened space, you get to dive deeper into the work and the atmosphere.

You studied abroad for some years, both in Copenhagen and in Vienna, how did these experiences change your approach to art? What did you bring back to Iceland from these countries?

When I was in Copenhagen, I had just started studying – what I took from there was the experience of living in a larger city and having access to a bigger spectrum of visual arts, but it turned out to be a good preschool before I started studying at the Iceland Academy of the Arts. I was a graduate student in Vienna for six months while studying at the Iceland Academy of the Arts and decided to go back to Vienna after graduating in further studies. I met people during the exchange and wanted to enjoy the city further. There was some mystery in the city that charmed me, but during this time I fled between Vienna and Berlin and it was a good experience to get acquainted with the art scene in both those cities. I think it’s incredibly healthy for all artists to stay abroad for some time and broaden their perspective, build new relationships, but at the same time I’ve always been quick to come home again. There is a certain power in the art scene in Iceland, which has always fascinated me, and it is as if it is easier to implement projects in a short period of time than in the places I have stayed abroad. What I have come home with after staying abroad is bit hard to say, but probably everyone’s experience is reflected in some way in their work.

Is there any artist in particular that has influenced your artistic practice?

It’s tough to choose just one because so many artists have influenced me in so many ways, but I want to mention Andreij Tarkovsky. When I was studying at The Iceland Academy of the Arts I watched his films over and over. His use of time and space has influenced me. He builds up tension and engages the audience with very long shots. He creates a unique atmosphere and awareness of time passing, which has stayed with me and influenced me and probably my work as well.

The subjects of your works are often objects and materials, where does this interest come from?

I think this starts very often with my curiosity of seeing things in a different way and transforming them into something more abstract with the help of the video camera but also for aesthetic reasons. The time element is also important. Both the transformation that occurs in the object itself while recording and the time elapsed while the pieces are displayed. This creates an interesting interplay and forms the overall effect.

Your pieces have a strong tactile aspect, you seem to be interested in the concrete features of the objects, but you chose to use the digital video as your main medium, which is probably one of the most immaterial medium. Why did you choose to work with digital video?

When I started working on video it was a certain magic to be able to work with audio and video at the same time and create nonlinear stories that described some kind of condition and atmosphere that charmed me. Then you could say that I did not alter out of this medium because of the endless possibilities that it has. Nevertheless, I’ve always found it hard to say that I’m just working on video, because the beauty of this medium is that you can go so into many directions within it, whether it be performance, sound art, painting, sculpture and even poetry e.t.c. This might just be a matter of how one chooses to play within the medium.

Your works are often intriguing loops that bring people to a sort of meditative state of mind. I think it’s really interesting how you create links between the concrete world of common objects and the spiritual field. In your videos you often transform the objects making them appear as something else, something more abstract. Is this link something that you look for when you plan the pieces?

It all starts with exploring the function of each object and doing experiments with the camera at the same time. Getting to know the things through the camera and witnessing some transformation through the object.

I think this transformative element is very important to me and I play around with it. I always feel intrigued when things are transformed and I aim to allow the audience to experience the aura of the thing through the video. Although I choose a particular object, it may be that it’s not the thing itself that interests me, but the sound it creates, the motion, or some activity within the thing that we usually do not take notice of.

These experiments began around 2010 when I exhibited in a small gallery called South South West, located in a small wooden house in Keflavík. I transformed the house into a sound and video machine and since then I have been focusing on the machinery, manmade infrastructure and technological relics and allowing them to impact the audience by giving insight into the abstract function, or a chance to experience the objects from a new angle. The meditative thing was something that came as a side affect to begin with. I guess meditating is repeating simple mantras again and again, so watching something over and over could create the same effect.

How would you describe your look on the world? Do you have a scientific approach when you observe objects, or do you look at them more in an emotional way?

Hopefully, a bit of both. I guess I try to stay open emotionally and sometimes I seek inspiration through searching within and even work on a subconscious level, through visions I have when sleeping or meditating. In my early works I often tried to imitate what I visualized – but now I guess my videos are often based on objects from my immediate environment and these objects have a scientific function that speaks to something inside, so as I say, a bit of both, I hope.

All photos courtesy of Sigurður Guðjónsson and BERG Contemporary.