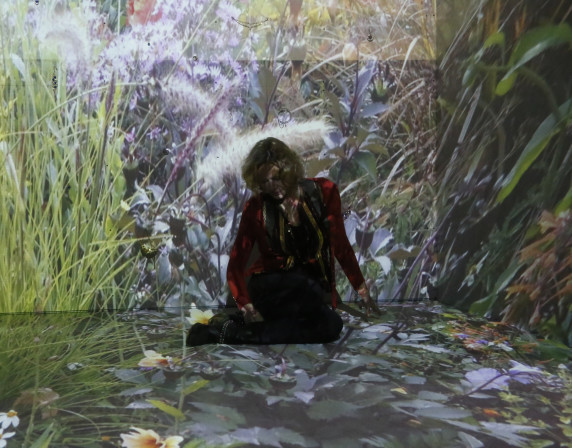 Playing with themes such as transformation and disguise, Ásdís Sif Gunnarsdóttir’s poetic performances have become known to many. Often treating videos as songs while reciting poetry, her work can vary from large installations to photography and take on different forms. She was born in 1976 in Madison, Wisconsin and has studied at UCLA in Los Angeles and at the School of Visual Arts in New York, although she now lives and works in Iceland.

It’s safe to state that Ásdís Sif will be having a busy upcoming weekend. She’s opening her new exhibition, titled Vision in the fog at the Akureyri Art Museum on Saturday, alongside pioneering video performance artist Joan Jonas, that the museum has made sure to state as being no coincidence. On Sunday Ásdís Sif will be a part of Cycle Arts and Music Festival, performing her piece Object Perception #3. Therefore I wanted to hear from the artist herself, her thoughts on her projects and work process.

What are your thoughts on exhibiting alongside Joan Jonas and what is your connection with her? What are we going to experience at your show?

I have been influenced by her art shows through the years. I’ve seen video installations by her in New York and in Los Angeles, as well as films and videos that I’ve seen screened on special nights in UCLA. She is a very respected video artist and her installations really have an effect on the viewer. I think my connection to her is that I love making installations that are a total experience, that you can walk into a space that surrounds you with visual poetry. My intention is to make a show like that in Akureyri, opening this forthcoming weekend, where you walk into a space and get surrounded with colours, videos and movement. In this exhibition I want to reflect on our present times, where everyone keeps interacting through various media and e-mails and offer people the experience of a real moment in time. A poetic and visual moment one can have with the self. You might be able to push record on a device, but the moment you’re recording doesn’t go anywhere.

I read somewhere that Jonas started doing performances due to it being less dominated by men, unlike sculpture and painting, (although she’s stated that she considers her work as androgynous in many ways). What were your initial reasons for making performance work and what keeps you doing it?

I think it’s cool that she said that, and it was true at the time. Now it’s different, today men are also doing performances and I think women have gained more space in sculpture and painting. I think it’s also important that she says that her work is androgynous in many ways, because it is tiresome how women’s art gets labeled as feminist art. Art work goes far beyond labels. My focus though, as I was graduating was making feminine poetic videos, that I felt were a taboo to work with. In Iceland I am often labeled as someone who is making “glittery art” or fairy like. Both are sweet ways to describe it, but my art work has always gone far deeper than that and is way more serious than that, sometimes I feel it goes even to a point of being too serious and sad.

Since you were born in the US and have studied there, I wanted to ask if you feel that the state of performance art is somehow different between here and in the US in any way?

I think that in Iceland today, it is less sculptural than it was before and I think it has to do with that artists have difficulty in funding their projects and the fact that we have very limited materials to choose from, whereas I guess in any big city there is a wider range of material that a performance artist can dive into. To do performance art in Iceland is a bit like being on a desert island, materialistically speaking.

Your work strikes me as very poetic and dreamy, sometimes hovering on the verge of the real and the surreal, is there anything in particular that you want to come across in your work or for people to experience through them? What usually comes first, the visual aspect or the words you speak?

The visual aspect comes first and then the poetry, my words come through performance and video art so I consider myself as a video poetess. I never go by a particular concept in creating my work. I fantasize about the work before I enter a space, then I apply my work into it, sort of like a graffiti artist would, in hope that the audience experiences something similar to myself.

How important is improvisation to you when you perform? How much do you plan ahead and how much is improvised?

I have a planned frame and improvisation within the frame is really important to me, it’s so liberating and it is connected to happenings and the thought of reality being a sketch like Milan Kundera says in Unbearable lightness of being.

Your poetry seems very personal, do you ever go into character when performing or do you just stay yourself? What gives you courage?

I always go into character when I’m performing, but sometimes I use costumes and sometimes not, or I defiantly always go into an altered state. The first time I saw “myself” on screen was in the film Northern experience by Gurwann Van Tran Gie.

What are your influences in terms of poetry? Any dream collaborators that you might want to tell us about (living or dead)?

I would like to thank Ásdís Sif for taking the time to give me her answers and wish her the best of luck with her thought provoking art endeavours this upcoming weekend.