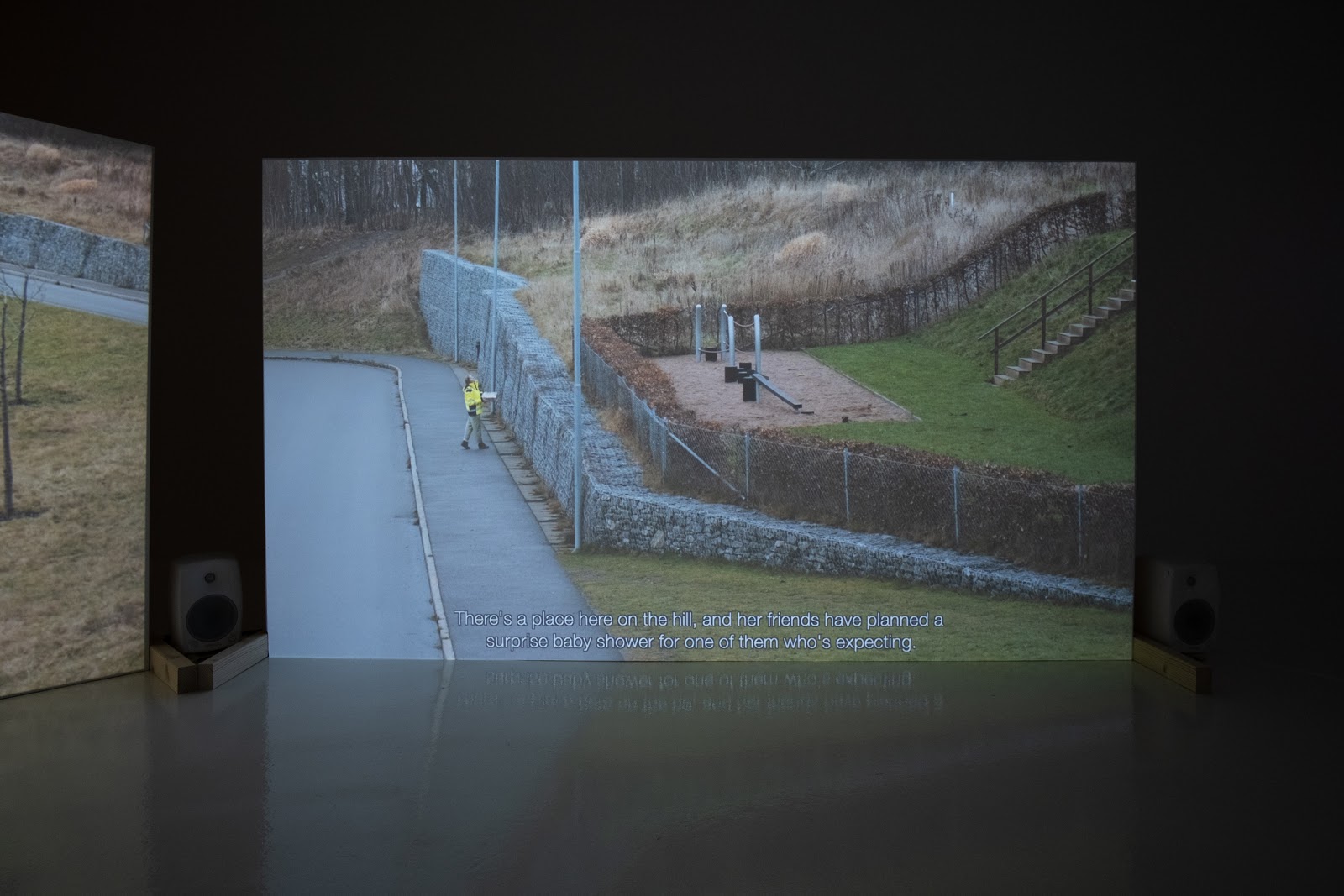 In Klængur Gunnarsson’s films, slow and eerie confrontations with an outside in the landscape focus our attention on liminal moments and places we might usually ignore. The works are sensitively perceiving the frictions in our natural world, trying to engage with an otherwise indifferent suburban and cold environment. Narrators and anonymous characters populate the scenes, treading a line between the poetic and the political. We talked to Gunnarsson on his working process, influences and Reykjavik, exploring personal and societal confrontations with nature.

Can you talk us through your artistic beginnings?

I went to Sweden for the first time after high school in 2004 to attend a public college, where I studied analog photography. I then trained at the Iceland Academy of Arts, and was mostly interested in photography, and video-based performance too. When I’m making and filming these more recent works, I’m looking at film as a form of photography, inspired by these early days. Setting up the frames for film is a similar process to assembling the composition of a photograph. Often there is not much happening—I don’t play with the camera or use it hand held.

What is the starting point for your works?

I usually begin with a limitation. For example, the recent Krókótt / Crooked at the Reykjavik Art Museum started from the question: how far can I ride my electric bike from a certain location, and then back, and then pick up my girls’ from kindergarten, and then home, without emptying the battery? The distance was about 40km. I picked a random location on the map, rode the bike there, and back. While I’m riding on the bicycle, I’m looking around, filming, stopping and listening, and recording my audio.

During this particular bike ride, I rode past this wall—which is the main character in this installation. I thought—’okay, here is another limitation!’ I repeatedly visited this site again and again and again with a video camera and an audio recorder. From this limitation, something builds. From that, I started writing. For a while, I felt like I was trying to pump life into the wall by giving it a voice. That’s where it all starts from — limitations in the landscape and an interaction.

What role does the narrator have in your films?

For me, it starts with reading kids books for my children, trying to understand the world as a child through a fictional fox, for example, who is strangely speaking our human language.

Looking at this wall—this fortress—I cannot understand it. That’s the first encounter that happens when I see these places. Usually, I’m riding through the landscape, and everything looks ordinary, and suddenly there are these shock moments of small things that capture my attention. I cannot comprehend them, so I try to give them a voice in order to understand them. Then, within a monologue that I write, I’m exploring my own thoughts on everyday life and how we as humans operate within that environment. We speak to each other and converse.

I see traces of Zoe Leonard or Icelandic cinema in your work. Where do your inspirations come from?

In Drift, where you can see the microphone, that visualisation indicates that it’s not just happening out of nowhere—there’s an artist present, as someone who creates this. Agnes Varda has inspired this thought process, as a director whose documentary work often can be very experimental in narrational style, exploring where the voice comes from. Then there is also Swedish director Roy Andersson, who has also been a big influence on my work, with his grey, gloomy, Scandi, shitty, humorous tone, characters and sets—their slowness and strangeness.

How important is the installation and exhibition context for your films?

It’s a battle. For the last two years, I’ve made work for installation at museums and galleries, but I’ve also produced work for cinema and film festivals. It’s very hard to cross that line back and forth. For instance, my recent installation at the museum, I find, doesn’t work well as a single channel video, viewable on any handheld device. It’s the same with Drift, which doesn’t work in a cinema environment. In that piece, I projected the subtitles onto logs in the exhibition space, they’re an important part of that installation—it’s not just an object projected onto incidentally.

From the exhibition ‘Krókótt / Crooked’, now on view at the Reykjavik Art Museum. Courtesy of the artist.

Large, philosophical or earthly questions about the man/nature binary and the anthropocene seem to whisper in the background of your works. Do you agree?

The whole realm and craziness of the anthropocene is too large to tackle in one installation. I’m very interested in how, in our everyday activities we confront this problem of being within the landscape and within the Nordic suburban city. We are constantly being sold nature—being urged to ‘buy this place here, it’s very close to nature’. There’s always a friction that occurs, which I’ve been looking at in Drift, Trinket and the installation at Hafnarhús.

I’m also interested in the Reykjavik context. From the Church Hallgrimskirkja, there used to be a clear view towards Esjan, the mountain. Slowly through the last four to five years, it has been blocked. This January, I noticed when I was home in the city that there are hotels being built that are blocking the view. So we’re always stumbling onto something—we’re trying to reach nature, but it’s obscured. We want to buy nature but we don’t want to really experience or inhabit it—it exists as a facade for us.

I disagree with the way these anomalies are being formed and sold. The fort and wall in Krókótt / Crooked is sold to us with a sign that says ‘at one with nature’. But then, the first thing you see is a wall that is not very inviting and is not at one with nature—it’s caged. From that disagreement, I want to search for a common ground and a means of engaging with the inanimate and the uninviting.

From the exhibition ‘Krókótt / Crooked’, now on view at the Reykjavik Art Museum. Courtesy of the artist.

I wanted to ask you about politics and aesthetics. Particularly through your work’s focus on walls, I can see traces of Jacques Ranciere’s writing on Chantal Ackerman in The Politics of Aesthetics. In that body of work, he remarks that Ackerman’s depiction of the US-Mexico border wall treads the fine line between its inherent politicisation, and yet its simple, formal beauty. Do you see the wall in your films as having some sort of political dimension?

Yes, of course my work does. There is no escaping that. There’s such a detailed decision and process behind designing and building such a wall as the one featured in ‘Krókótt / Crooked’, it’s very long. I don’t know how many people come to the table to agree on building the wall. That makes it a political phenomenon, in the end—the decision to build a wall, by a lake, in a new neighbourhood.

I don’t want to put critique in the face of the viewer. The actor who read the texts in Crooked was asking me how long it took to write, because it is not that long. I told him that it took me many days to write it, because it is much more similar to poetry than a formal script. I’ve always tried to figure out a line to walk on between the poetic and political, because I’m very fond of an open experience of my work that can be taken in different directions.

‘Crooked’ is on view at the D Gallery at the Reykjavik Art Museum until 14 March 2021.