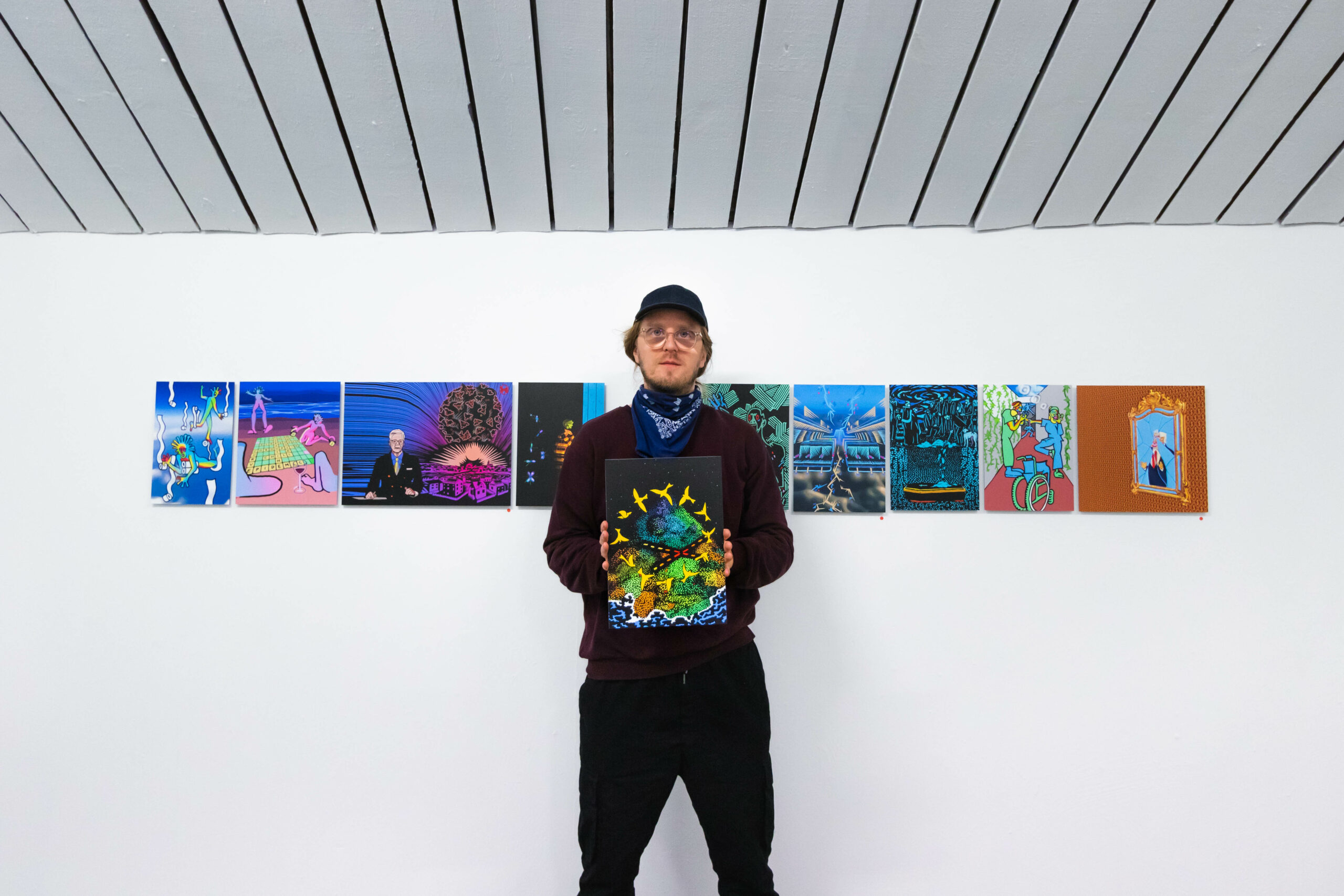 Your lockdown diary—a series of drawings from each day during the pandemic—struck me as tragicomic and universally relatable. Could you talk us through the series?

It was the middle of March when the pandemic became serious in Europe, and I got into this really manic state. I just started drawing, and posting them online for my friends. Their reactions pushed me to continue. After a few of them, I had a lot of adrenaline to create more, and I was fuelled by an anxiety about the uncertainty of this new virus. I decided after a few posts to dedicate myself to become an independent news outlet during this time. Everyday for a whole month, I was manically drawing from morning until night time. The works are a graphic novel on the novel virus. I would like to eventually make a book out of the project, and I’ve also printed them as physical works, which were on view at Gallery Port. For me, their transition from being a purely digital project for social media to becoming a physical entity is very interesting.

From the exhibition Teikn á lofti at Gallery Port

What is the relationship between your drawings and performances? Is one medium more central to your practice?

I think the answer is both. It’s a privilege to develop a concept in so many forms—and this exists more so in contemporary art, where there are so few rules, and you can be many things at the same time. I really love that element of being an artist. When you’re a young artist, or you’re working as an artist for a few years, it’s very easy to slip off and get a day job, and then you don’t have time or energy to do anything. So you have to have resilience, and be stubborn, as an artist. For me, I’m not always in the mood to be performing and talking to people, so when I feel like retreating into my introverted side, I start drawing and making handicraft. I love mixing performance and drawing.

My new project for the Reykjavik Art Museum, as part of the group show ‘Autumn Bulbs II’, is a mix of these mediums, because I will also perform inside it. The piece is a bouldering wall, and it depicts zodiac constellations. It’s inspired by my unborn daughter who is coming into the world next year. The due date is in January, and she’s supposed to be an Aquarius, and if she’s early she will be a Capricorn or a Capriquarius. I find these ancient symbols so fascinating—they are really important for us to tell stories about each other and to understand each other’s character. By making this work, I’m entering a huge rabbit hole of knowledge. I used an app to create the composition for the wall—the ‘bouldering track’. I put the app on the 23 January, and stood next to the wall. The signs are composed for that specific date. It has a title, it’s Stjörnuliljur in Icelandic, in English it’s ‘Astro Lilies’. I’ll give a reading of the zodiac, whilst climbing the stars. I really look forward to seeing a human body in the painting—travelling around the painting.

When you perform are you a character or are you yourself?

More and more, in my performances I like to be myself. I have occasionally worked with amateur theatre, but it’s also nice to embody the position of a creator. It changes for me each time—it’s nice to challenge myself to do new things. As an artist, I really don’t want to follow one formula for too long.

Do you think your work is concerned with the role of the artist, and what it means to assume this role in society?

Yes, I’m always investigating this role. There have been times, where I truly believed that if everyone could be an artist, we could have a very constructive world—but that might be problematic. Being an artist is an important job in society, and those people who are titled ‘artists’, should be those who are working at it everyday. It’s like with athletes—you might go to the gym, but that doesn’t make you an athlete.

If there was another line of work you were going to get into, what would it be?

I always wanted to be a scientist, before I went into art. Even mathematics are fascinating. I’ve started playing instruments lately—and that, for me, is a bridge between art and maths, or logic. Playing piano is poetic and mathematical, direct and sensory. Real instruments like piano, or guitar, or steel pan— are not art objects. But I’ve made some musical instruments myself that are artworks. For instance, in my ‘Organ Orchestra’, there are different ceramic organs, wind instruments, lungs, liver; the stomach is a percussive instrument, the brain is a synthesizer. It’s a slow, ongoing work. I would love to record an album with them.

Can you talk us through your album that came out in 2018, ‘What Am I Doing With My Life?’

It started out without the whole ambition of a vinyl album. On each stop of our DIY tour, I brewed and fermented a new version of the performance, and new friends joined in. In the end, it was a full album, with some 15 guest artists.

Is collaboration integral to your work?

Most of the time I’m on my own, but at that time I felt a very big need to collaborate. It was a very extreme collaboration. It was all driven by fun and humour and friendship, really. Friends who happened to be artists and musicians.

Do you think that art should always be humorous?

No, not at all. Art should be all of our emotions in life. It should be political, it should be abstract and spiritual, and humorous sometimes too. It should be really sad, thought-provoking, shocking or even terrorising. I think the moment that art goes in only one direction, then it’s dead. Art should be a mirror of humanity, and if we are all so different, and hold different behaviours and beliefs—so art should reflect that.

Storytelling is the nucleus of many of your performances. How important is literature, mythology or folklore to your practice?

Narrative and storytelling is very much in my practice. It’s deep rooted in our Icelandic culture. I have an instinct to tell stories from childhood. As a young child, I played with toys and created imaginative stories. Later in my youth, I began creating comics and stories before I knew anything about art. It wasn’t until I was about 20 that I knew about any such thing as an ‘art world’. I learned that everyone is invited to participate in art—everyone can make and create. It’s the job of us artists to invite people who are not full time artists, whether it’s children or older people, to teach and to try to open people’s minds.

How do you feel about your work being presented online due to the limitations faced during the pandemic? Is there something lost or gained when our idea of an art ‘public’ is reoriented?

There are some Icelandic artists who specialise in online projects and digital art, namely the art collective ‘Hard-Core’—they were [making digital art] long before Covid, they were doing everything that we are doing now. During the pandemic, I got involved with a group of Icelandic artists to produce digitally communicated art. We came together as a group in the confinement of COVID-19, and we decided to make a day of performances, streaming online from Berlin, Hannover, Helsinki and Reykjavik. For the first time, we decided to perform through a live webcam, and made an event called Sunday Seven. It was 07/07, 7th July—it was very experimental. We’re doing it again on the 10th of October, 10/10. So, maybe we will have learned something from this virtual performance show. I think it’s cool that people are adapting to our circumstances, it’s not a negative.

For instance, at Gallery Port, I came to Iceland to bring artworks with me, but I had to go into quarantine. It was really funny, Gallery Port put up an iPad with me on a call during the exhibition opening, and it became like a performance. Some people were really chatty with me, but there were others who were really creeped out.

One word I often see associated with your practice is ‘absurd’. How do you feel about this interpretation? Where did your interest in absurdity come from?

Sometimes I write the word, sometimes others have written this word about me. I embrace this word as a form of play, especially when I tell a story or when I work physically with material.

On the other hand, absurdity can be very negative. I feel like Donald Trump is absurd and there is a sense of danger and of twisted morality in its etymology. It shouldn’t be taken too lightly. Dada artists were using absurdity as a means of responding to their political situation, which is similar to our time now. Absurdity starts to grow in these precarious contexts as an anxious reaction to reality. The fun side of it, used mostly by surrealists, is where the absurd can be a kind of play. Making games, new rules or constrictions, might lead to wonderful creations.

Styrmir Örn Guðmundsson is currently artist-in-residence at Künstlerhaus Bethanien in Berlin, where he will have an upcoming exhibition. The group show ‘Autumn Bulbs II’ at Reykjavik Art Museum runs from 24 September – 18 October 2020.