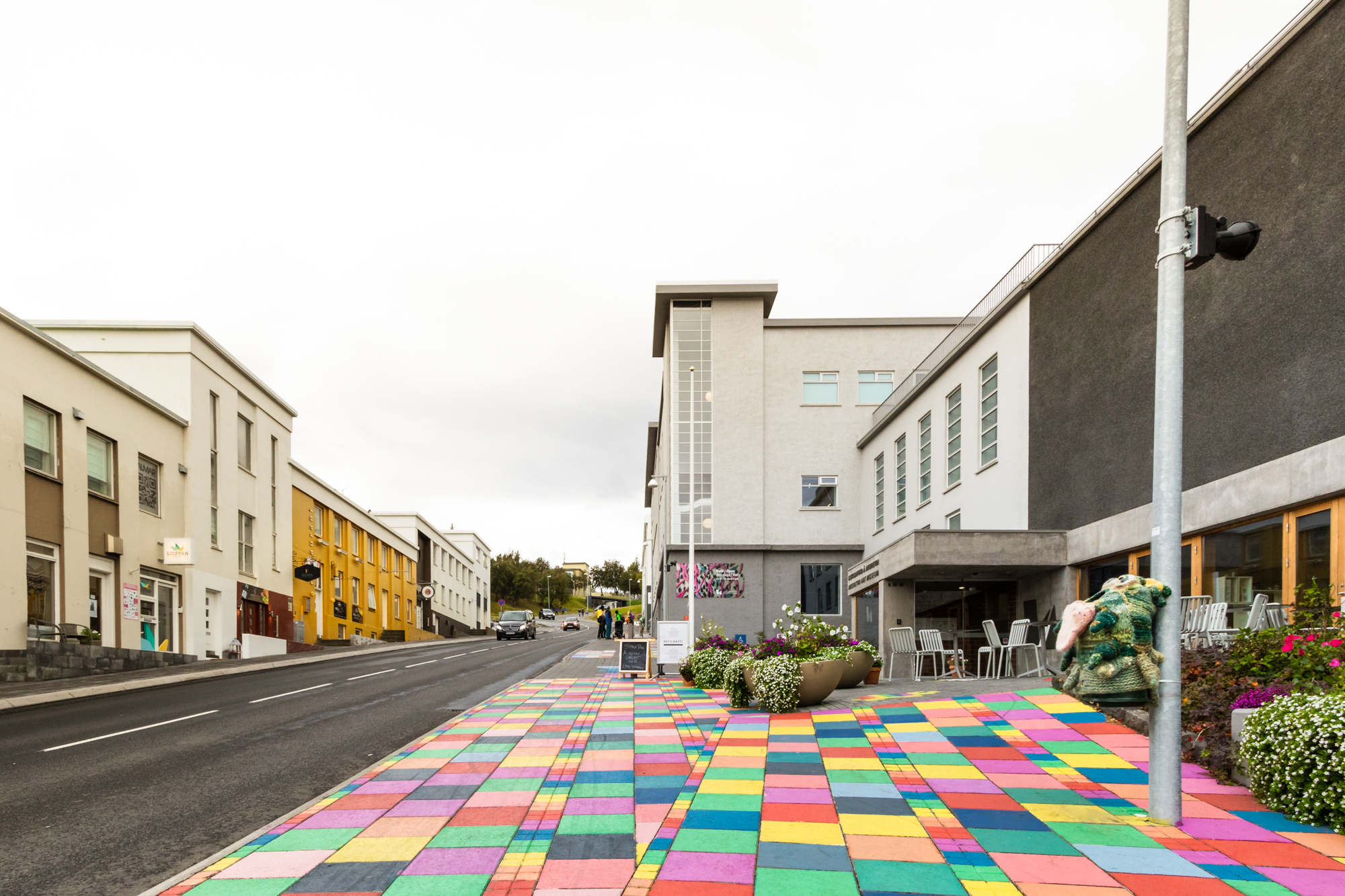 To learn the history of Kaupvangsstræti, Akureyri’s Art Street, we first need to look into the foundation of KEA (Eyjafjörður Co-operative Society) – an organisation of farmers from the district founded in late 19th Century which was a key influence in the development of Akureyri during the 20th Century.

In 1930 KEA built its headquarters on Kaupvangsstræti and thus the street became lined with industry and commerce which spanned from dairies and corn mills to sweets and soft drink factories, and shops, becoming the bustling heart of the town.

Eventually KEA and the factories relocated to the outskirts of town and for many years the buildings on the street were abandoned. In 1989 the Akureyri Art School moved to Kaupvangsstræti into a building which used to be, appropriately, a paint factory. Artists who taught at the art school bought the building behind it and moved their studios there, and thus the spark of what would soon become the Art Street was born.

In 1991 Gilfélagið, the Arts Society in Akureyri, was founded. Together with the municipality they set up the project to purchase the abandoned properties in Kaupvangstræti and convert them into cultural spaces. They set up the exhibition space Deiglan (Kaupvangsstræti 23) at an old margarine factory which became their headquarters, and started an arts residency which is still active today.

The Akureyri Art Museum (Kaupvangsstræti 8 – 12) moved in 1993 into a former dairy factory, truly establishing the street as the home base of Akureyri’s art world. In 2018 they expanded the museum to incorporate the next door building Ketilhús.

Ketilhúsið used to power the industry heating. Now it serves as a venue for exhibitions and can be rented from the museum for cultural events. The ground floor also houses Kaktus (Kaupvangsstræti 8), an independent arts collective of young artists which hosts exhibitions, concerts, and other events.

Further up the road are Mjólkurbúðin (Kaupvangsstræti 12) and Rösk Rými (12). Mjólkurbúðin is the exhibition space of Myndlistarfélagið, the Visual Arts Association. Rösk is the showroom and studios of the female art collective of the same name. Here they exhibit their own work as well as host shows of other artists.

Thanks to this transformation the street recovered the liveliness from when it was an industrial and commercial hub and is once again the heart of the town, but instead of factories it hosts book and design shops, restaurants, the Visual Arts School and Akureyri Art Museum, as well as many of the town’s art galleries and artist studios which has earned the street its nickname ‘Listagil’, or Art Street.

The best time to experience Akureyri’s Art Street is during Gildagar, or Art Street Days. Gildagur is an event which happens various times a year where the street is closed off from traffic, artists open their studios to the public, and the museum and galleries are open until late in the evening.

Special thanks to Hlynur Hallsson, director of Akureyri Art Museum, for sharing your knowledge on the history of Akureyri’ art scene.

– Text and images by Gala González.

Around the Ringroad This Summer