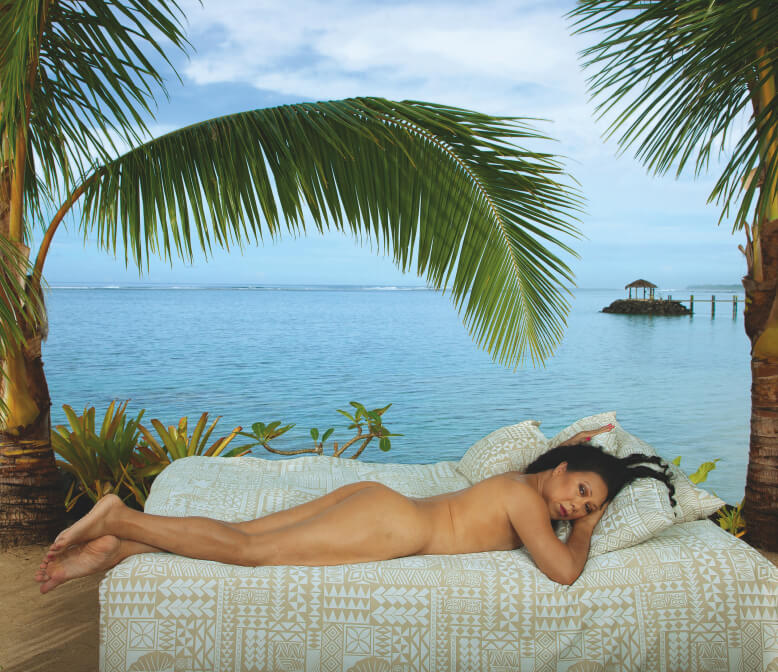 Yuki Kihara, Spirit of the ancestors watching (After Gauguin), 2020.

For the first time in its 121 year history, women outnumber male artists in the main halls of the Venice Biennale with over 80% female artists. This year, the 59th international art exhibition has also a small number of non-binary, queer and transgender artists exhibiting.

The question is, how are these minority groups represented and manifested at this year’s Biennale? And why does their representation matter? In this article, I will explore the representation of non-binary individuals at the pavilions of La Biennale Arte by looking at three specific national participations; the New Zealand, the Romanian and the Danish. These three pavilions deal with  their queer narrativesin quite different ways, elaborating on the complexity of existence as a non-binary or gender non-conforming person. The pavilions’ artwork are in dialogue with the Milk of Dreams by Leonora Carrington, a theme proposed by the 59th international art exhibition curator Cecilia Alemani. Focusing on “the representation of bodies and their metamorphoses, the relationship between individuals and technologies, and their connection between bodies and the Earth”.

Starting with the Danish Pavilion, titled We Walked the Earth, and its relationship to the natural world, transience of life and the inevitability of death. One finds hyper-realistic and life-size centaurs; one male, the other female and the third an infant, all dead in their stable-like home. The artist Uffe Isolotto takes a dystopian view in this work, exploring a world that is haunted by deep uncertainty. It is difficult to tell the meaning of this piece, even just to tell if it is tragic or hopeful.

The scene could be seen as the aftermath of a terrible event, an apocalyptic scene, appearing to be set in the future. The human-beast hybrids indicate a sort of post-humanism, but gone wrong. They´re found dead, rather than thriving. What does this say about our current conversations around posthumanism? In the official curatorial text from the Danish Pavilion they ask if we, humans, seek refuge in who we were or if we look for escape routes in what we might become?

The work is open to interpretation but I believe that the Danish pavilion also takes on the issue of gender. If the interpretation is hopeful, the centaurs could represent the future and the end of gender binary. On the other hand, they could be a reflection of the non-binary experience; the dissociation between one’s internal identity and external bodily reality, in other words gender dysphoria. Perhaps showing the exoticisation and danger experienced by those of alternative gender identities. In that sense, the centaurs are representative of an othered person or even an othered body. Their setting shows a sort of enclosure, they’re trapped without an escape, and eventually killed – a dramatic representation of the lived experiences of many genderqueer individuals.

The Romanian Pavilion challenges these ideas of othered bodies, gender and sexual dichotomies of Western culture with You Are Another Me—A Cathedral of the Body by artist and filmmaker Adina Pintilie. The piece opens up different ways of viewing bodies and beauty, continuing a conversation about who has represented the Romanian Pavilion in the past and who has been excluded. The piece consists of a multi-channel video installation, complemented by a virtual reality extension, hosted by the New Gallery of the Romanian Institute for Culture and Humanistic Research in Venice. The video installation shows a variety of different bodies and forms of intimacy; gay, straight, disabled, able-bodied and trans people. In doing so, the artist attempts to break the taboo around alternative bodies and their identities by showing how similar intimacy, love, desire and pleasure are between various groups of people in whatever shape, form or formula they exist.

Adina Pintilie, You Are Another Me—A Cathedral of the Body, 2022. Courtesy of Artist

On the website of the Romanian Pavilion, one can read additional information about each of the performers’ backgrounds. There one learns that HANNA is a sex worker and an activist from Germany that came ‘out of the closet’ as a trans person when she was 50, after a whole life in a body and an identity in which she never felt at home. She always wanted to be a woman, in spite of nature endowing her with a vigorous male body. Reaching her 50’s, HANNA finally decided to take the risk and become what she really wanted to be, what she had always been, and left her 20 years of marriage and family to start a new life as a woman. In the video art work, HANNA teaches viewers how she likes her body to be touched in a sexual way, and by doing so creates an open and safe environment for the viewer to learn about a subject or a body that is still seen as taboo in western society and popular media.

The gender binary in Western society is, however, far from universally accepted. This year interdisciplinary artist of Japanese and Samoan descent Yuki Kihara and curator Natalie King represented the Pavilion of New Zealand. They did an archival research and a film that explores the western misconceptions of the Pacific paradise and shine a light on the experiences of Sāmoa’s Fa’afafine (Sāmoa’s ʻthird gender’) community. Once you enter the Pavilion, Paradise Camp, the atmosphere is colorful, friendly and inviting with focus on the world of fa’afafine and fa’afatama. When translated literally, they mean “in the manner of women” (fa’afafine) and “in the manner of man” (fa’a fatama). These genders are fluid and move between the traditional world of men and women. They cannot be termed homosexual in the western sense, as in addition to having a separate gender identity, and have a varied sex life which may be with another man, woman, fa’afafine or fa’afatama.

Within Samoan society, tolerance of all individuals and their romantic and sexual likes, dislikes and choices is very important, and children are not pushed to conform to particular gender roles in the same way that Western children generally are. For example, the third and fourth genders of fa’afafine and fa’afatama have always existed within their society. These genders tend to care for the elderly and educate people about sex, which is a taboo subject for men and women to discuss in public. In Paradise Camp guests will find twelve tableau photographs or upcycled paintings by the late French post-impressionist artist Paul Gauguin (7 June 1848 – 8 May 1903).

Gauguin spent a decade living in Tahiti leading up to his death in the early 1900s and by historical accounts, his paintings created during his time in the Pacific are believed to feature ‘Mahu’ or the Tahitian ‘third gender’. In the pavilion, a five-part talk-show series – a group of fa’afafine and fa’afatama comment wittily on selected Gauguin paintings. Sharing their first impressions and interpretations on Gauguin’s paintings in an open, humourous and non-judgemental space. During filming, the cast expressed their varied views on Gauguin’s paintings, which are believed to represent the artist’s western perceptions of Indigenous Pacific/Tahitian culture, women and possibly fa’afafine. According to Kihara, by introducing the paintings only at the time of filming, they were able to capture an authentic and immediate reaction and according to the artist, the responses toward each of the five paintings were varied and reflected the myriad of opinions by individuals born and raised in Samoa. What I found personally interesting was how the fa’afafine and fa’afatama created their own non-binary stories surrounding the subject or paintings in front of them. It was both beautiful and interesting to say the least how they used their identity as indigenous non-binary individuals to challange the historical Western exoticised gaze upon various Pacific island cultures.

While the pavilions were different in their aesthetic, conceptual and political expressions, these exhibitions show a variety of realities which attempt at opening up mindsets  to  non-binary individuals. The focus on intimacy of different bodies and the potential dystopia awaiting a segregated and unaccepting society are the main focus points of these shows. Exploring how the past and various potential futures are connected to ‘alternative’ gender identities and expressions. Reflecting how non-binary people make their own narratives in a world where their representation is currently very limited and even frowned apon by the general public, at least in western culture. This is why the manifestations of non-binary individuals is more important than ever as political tension surrounding their legal rights has never been higher, even though non-binary individuals have always existed throughout history and different societies.

La Biennale Captures the Current Zeitgeist for Indigenous Voices to be Heard, but Are We Really Listening?

Posthumanism and Cyborgs in the Milk of Dreams