On gender, past and future projects, and a textured musical biography: In conversation with Gallery Gudmundsdottir 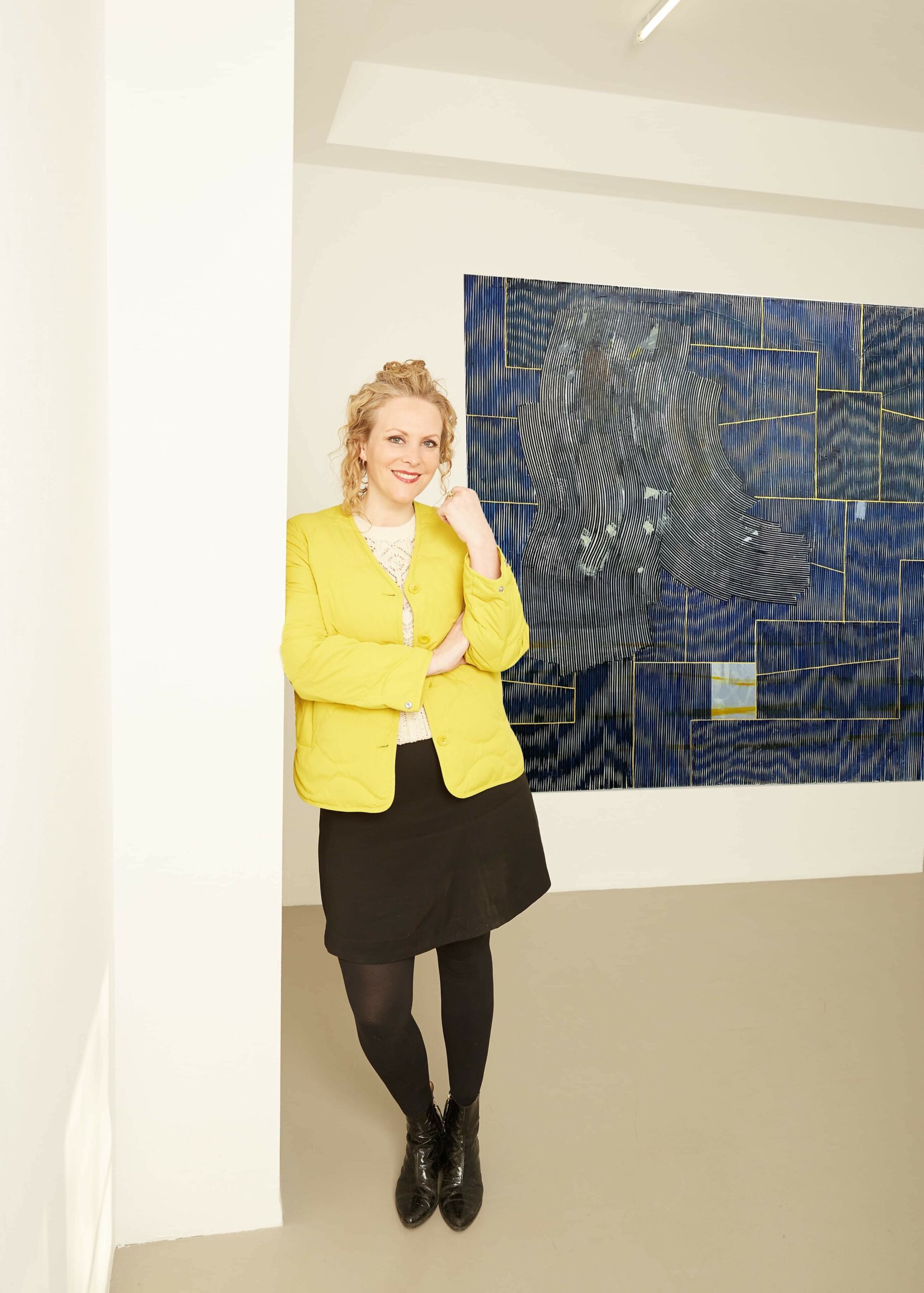 Having moved through the music and art worlds of Iceland and Berlin as a curator, art director and a performer, Gudny Gudmundsdottir is now opening a new commercial space in Berlin’s Mitte gallery district. A feminist-first spirit is fuelling the gallery’s inception and desire to create a sustainable economic model in support of a diverse selection of artists. Taking an artist-lead approach, the relationships Gudmundsdottir has developed with artists over the years form the starting point for the gallery’s ambitions, listening to what they need as the first prerequisite.

Let’s start by talking about where the initial idea for this project came from, and how your personal desire to open a gallery space in Berlin emerged.

Originally, I am a classically trained violinist and a musicologist. I was brought up in a creative household, and my mother and my aunt would take me to visit art exhibitions almost every weekend. Even if I thought this was an absolute torture at the time, it has had a long lasting influence. I then chose the path of classical music, but, to me, the visual arts were always in the background and took some time to take a bigger precedence in my life. Shortly after I finished my performance degree, my personal interest was shifting from the traditional classical music world, first into contemporary music and then into a more conceptual and interdisciplinary approach to the arts.

At 25, I founded my first festival in Iceland for music that later, with the help of good people, developed into The Cycle Music and Art Festival. Cycle Festival focussed on the interdisciplinary—questioning how we might create artworks, performances and collaborations where contemporary music and visual arts intersected. Often working on the festival, I would encounter disparities in artists’ support networks, and very often the male artists would have a gallery, a big studio and a group of people working on production, with big funders and collectors—whereas the female artists would not. Then I began to understand that many of the women I worked with did not need another project space or a festival, they just needed somebody with a link to the commercial world.

So when the opportunity came to open a commercial space in Berlin, I jumped and have not looked back. I could never have guessed that my 8 hours of violin practicing a day would lead me to becoming a gallerist, but it helps having a versatile background in this job, since I have had the opportunity to get to know the working environment of artists on both sides of the table and can move between the roles of the artist or the organiser and agent.

The artists in the roster of your gallery are really different ages—you’ve got people who are young and still studying and then much more established artists. Was the intergenerational make up something you intended from the outset?

The artists that I am representing are of different ages and in different phases of their careers. They also represent different types and forms of art pratice, from paintings and drawing, to socio-political works and research-based art on phenomenology, crypto-futurism and the anthropocene. Now it is my role to find the best way to mediate what they are doing and sometimes to understand how to bring together other people, to support the more immaterial or political works that don’t translate easily into a product. In this new gallery and elsewhere, I have encountered a tension between the worlds of social practice and commercial art. Ultimately though, I am invested in the question of how we can move things around us with art and activism, and how we might be able to speak up and change the views of the audiences.

I wanted to ask you about your current show and previous work with Libia Castro and Ólafur Ólafsson. Participating in the performance demonstration In Search of Magic – A Proposal for a New Constitution for the Republic of Iceland, I found the dualism interesting—that there was this specific, local context of the Icelandic constitution alongside a wider connection to issues around migration and borders in Europe.

Yes, [that work] is about so many things. In 2016, we commissioned a work by Libia and Ólafur at The Cycle Music and Arts Festival. This project has had a very prominent place in my life over the last few years, and I have taken on different roles in the process. I have moved from being a commissioner on behalf of the festival, then curating and producing it and now lastly showing it in the gallery in Berlin.

To give a little background on the work, the artists team Libia Castro & Ólafur Ólafsson invited a group of composers, musicians, organisations, activists and members of the public to join them in creating a multivocal music and visual art performance, bringing to life all 114 articles of the proposed new Icelandic constitution from 2011. This new constitution was written in response to the Icelandic public‘s demand for a new constitution following the 2008 political and economic crisis in Iceland, with the key aim of contributing to a fairer and more democratic society. The project gained international attention for its innovative, democratic approach. On October 20, 2012, the nation voted yes to its new constitution. Nonetheless, it has still not been ratified by the Icelandic parliament.

For me personally, In Search of Magic completely merges visual art and contemporary music, but this otherwise socio-political work also has the extra layer of activism, and that was very interesting. It is a project that is going beyond disciplines, or an extradisciplinary work as it has started to be coined today. The activism was new to me and in retrospect, I feel that I didn’t always know where the artwork finished and the activism started, which probably was the intention of the artists all along. There was, for example, a moment where I had issues with the authorities, I had completely overstepped my role as the curator and started accidentally becoming an activist. That was terribly uncomfortable and thrilling at the same time, and I must say that it’s exciting to explore the potential of art as a mobilising force in our society. Sometimes one is bound to make mistakes or overstep to find new territories and balance.

Has there been anything that has changed your perspective on the work, bringing it to Germany?

I don’t think bringing the work to Germany has changed the work or given it new meaning, but it has opened up a lot of questions about Iceland and about democratic processes. It has brought to light the fragility of our democracy and it is important for us to keep that issue alive. The fact that the results of a national referendum can just slowly be forgotten and not ratified is almost unthinkable here in Germany. On the other hand, it is also almost unthinkable in Germany that a new constitution could arise through grass roots activism—so that surprises people a lot. It definitely shatters the shiny image that many have about Iceland. It also brings out emotions in people. There have been more emotional and surprised reactions from audiences than I would have ever expected.

How does your own experience as a performing musician feed into the way that you work with artists, and do you feel that you have a different sensibility for performance art because of that?

I am a devoted chamber music player, and while playing with others in a small setting, musicians create one sounding body out of all the instruments. It’s so beautiful and you need to listen to every move, breath and sound that your colleagues are making. Then you need to be able to act and react in the space of a second with the music. There is no big soloist and it’s a collaboration where every voice is equally important. Music performances are like a dance, and I think that might be one of my strengths when working with artists—the ability to listen and to act and react in the right moment.

Can you talk about any projects that are coming up this year that you’re working on at the moment?

Opening the gallery in this renowned gallery area in Berlin is definitely the highlight of the year so far. The exhibition Landscape Enclosed by Anna Sigmond Gudmundsdottir is also significant for me, since Anna has been somewhat a mentor to me. I remember seeing her work for the first time at Manifesta 4 in Munich 2002. It was a large mural work—so simple and yet so multilayered that I needed to rearrange how I had been categorising my reality. Maybe it was the first time I wondered if I had chosen the wrong art discipline. It was definitely a turning point, where I began to see the visual arts as this open and free medium, something I was missing in classical music.

We are also very grateful to be in collaboration with the Icelandic Embassy here in Berlin, they host some of our exhibitions in the residence of the Icelandic Ambassador. The Residence is a magnificent house and it gives the exhibitions a completely different context to exhibit the works there. The next exhibition WERK by Hulda Rós Gudnadóttir will open there in the beginning of April.

Opening on April 29th 2022, Anna Rún Tryggvadóttir will exhibit a large-scale sculptural performance. Her work springs out of a material based research that reflects upon anthropocentrism, through non-human performances. She works with staging critical moments of material entities, through slow paced kinetic installations, often drawing into light, breathtaking moments of life and decay.

In June, there is an exhibition with Kolbeinn Hugi who is working with a very interesting concept called The Animal Internet. It’s, in a way, a post-internet, futuristic work which gives us an alternative view into a zoo-cratic future, where all animals have been given a way to log into the internet.

With that in mind, I shouldn’t be saying too much about the coming exhibitions – I do want people to come and see them in person, rather than just read about them.