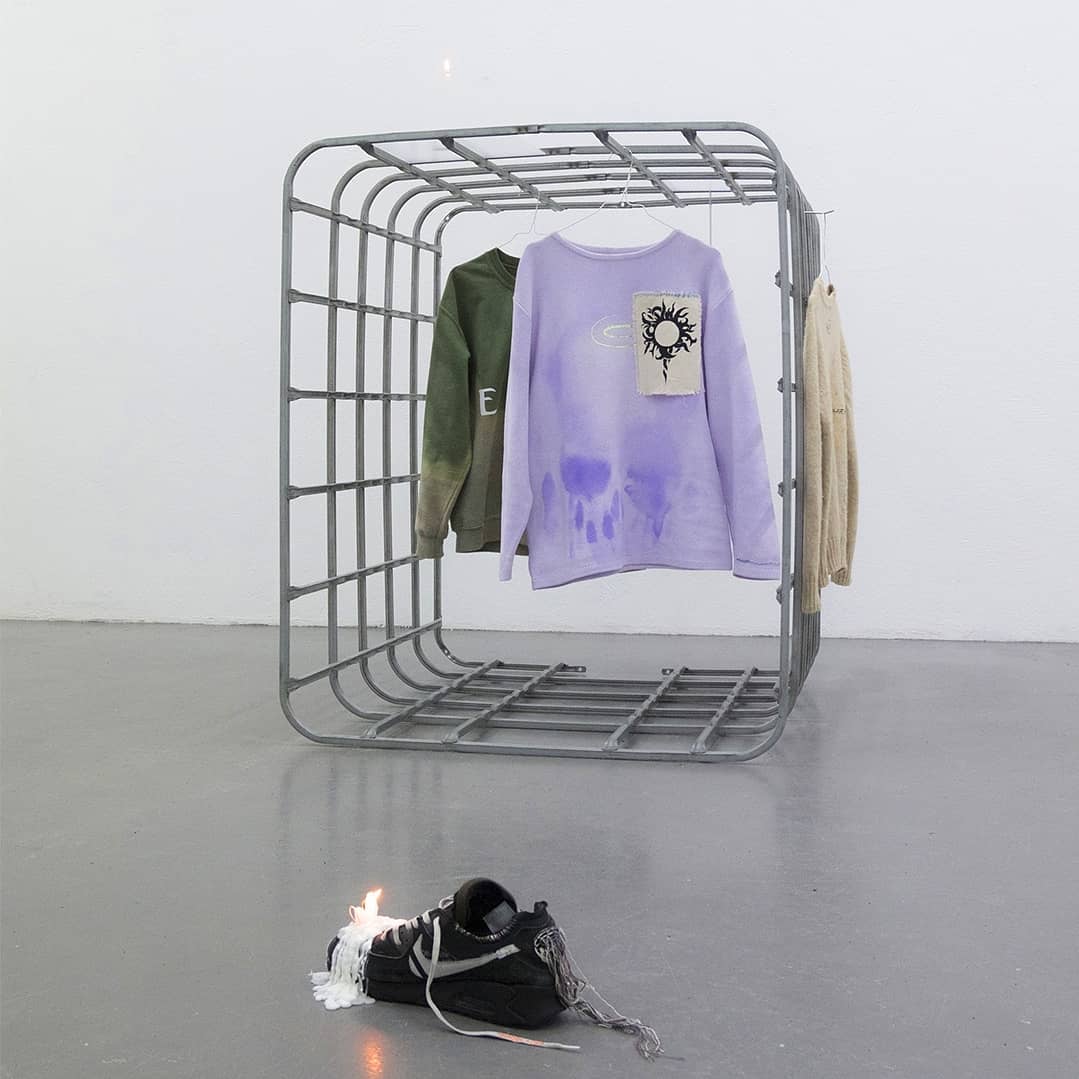 Interview by: Ruby Reding | Photos: Courtesy of the gallery.

We interviewed the four artists behind OPEN gallery, Hildigunnur Birgisdóttir, Örn Alexander Ámundason, Una Margrét Árnadóttir and Arnar Ásgeirsson, as part of a spotlight on emerging artist-lead spaces in Iceland. Primarily in use as a studio for their respective practices, the artists of OPEN on Grandi are insistent that they are more closed than they are—well—open. That layer of irony was doused over our conversation too—which includes a more general oral history of the space, including its evolving exhibitions and performances. It seems their reputation is somewhat larger and more impressive than they intended it to be, but it is nevertheless deserved—the combination of four artists running a space, all with an amass of experience as intrepid curators, artists and educators has created something pretty special. Read below about the space and their growing archive, which consists of wolf piss, personalised merchandise and other treasures.

Can you tell us a bit about how you started OPEN?

It’s a studio first and foremost. There is a small segment of text in the rental agreement stating that we have to have some activity here. So, if you’re here and if you have your studio, you also have to have some public events. It is a bit like a forced exhibition space… but we all enjoy participating in it! Running Open is something that we are all interested and invested in, in different ways—but we are definitely more closed than we are open, thus the irony with the name!

What was the first exhibition you did here?

It was ‘Pamphlets’. Hildigunnur [Birgisdóttir] was driving around with her parents in her dad’s car, when she spotted a lottery stand—there are lottery tickets where you can fill them out, and after she brought one here, and we came up with the idea of inviting artists make pamphlets for an exhibition. We had around twenty artists make a pamphlet in an edition of 30 in a classic ‘Z’ fold, and we sold them very cheap. That was the first show, and then we continued to have group shows with weird parameters. We did one with a jewellery wagon that we accidentally inherited. It was a jewellery display system on wheels, which just had all these different compartments, and we invited nine artists to create a piece for each drawer.

Then after the jewellery wagon show, we made OPEN merchandise. We found a shop that has been open for 40 years, who make caps and cups. They’ve been printing logos, texts and images on mugs for all kinds of clients for 40 years, and they always took samples of each one, so they have this crazy collection from political parties and personal milestones or sports associations. There’s a mug for when somebody built a bridge or when it’s somebody’s 40th birthday. If you think of it, it’s all printed on a mug. ‘Got an event? Put it on a mug!’ We managed to borrow the whole collection and then we exhibited it here, so it was a whole collection. It was a history of Iceland in mug form. The exhibition was titled ‘leir og postulín’, clay and porcelain, and we exhibited about 800 coffee cups from their personal collection.

How important is it to you that you have different kinds of audience, are you interested in creating exhibitions as a kind of community-building force?

Sometimes it surprises us. With the mug show for example, that crossed a little bit over to other communities. We commissioned artists, associations and designers to make special cups for the show to add to the collection. And we also aimed to go a little bit outside of art in the process.

We ask people in the local community and from abroad to participate—exhibiting things that we would like to see is always the first criteria. The pamphlet show was community building, but the initial feeling we start from is that we really want to experiment with what an exhibition is, questioning how shows can happen and under what conditions.

Sometimes the exhibitions have even stretched out of the space themselves. For example, Amanda Riffo created an ice-cream for her solo exhibition that was simultaneously launched at the ice-cream shop Valdís next door. Visitors could buy ice cream and experience Riffo’s work.

It is also to our advantage that the space is like this huge beautiful garage. It has a big garage door that we can open up. Which is also a way to attract random members of the public. The garage door was open during Ásta Fanney’s voice performance (Dilence leep s01e01) as well as on the opening of Hrefna Hörn Leifsdóttir’s solo exhibition where Halla Einarsdóttir and Smári Róbertsson did a performance. We had some random visitors join in. The doors were also wide open that time we had a weight lifting tournament / punk concert.

Are there any shows/concepts you feel are lacking in the Icelandic art scene?

At least initially, we tried to think about what was missing from the scene in Reykjavik. We felt there was a lack of curated or interesting solo shows by international artists, so we wanted to fill in that gap, and we also wanted to mix that with our own experimentation, questioning what can be exhibited in the gallery. We try to expand that as much as possible.

I think inclusivity is, of course, something that has been lacking in the Icelandic art scene. There are still a lot of missing international connections and the scene is very local. There’s also a lot of spaces producing a large amount of exhibitions. So I think it’s lacking somewhere that is doing things a little bit slower, doing things more astutely. We allow ourselves time to really think about what we are doing and why, gaining some perspective rather than running on a constant chain of production.

Can you talk about any shows that are coming up?

We want to continue with the mug show with the next installment, ‘History of Iceland part II’. We’re thinking about the question: ‘how does the visual history of a country present itself?’ We’re interested in how history is reflected within Iceland, as a kind of mirror that might be a more true or lived depiction of the country, which could be found in a clay and porcelain shop, or even in museum archives. We are also very excited to have taken part in Sequences Biennale this October with a show by the Artist collective Lucky 3.

Can you talk about a particular exhibition that has been surprising, or has had the most interesting reception?

We did a solo show this year with a Finnish artist, Aapo Nikkanen, in a very delicate lockdown situation, which was strange but went really well. We had a really long, 12 hour opening. He did his quarantine while installing here in the gallery space. So it was a crazy, win-win situation, we just brought him food.

We had a really nice exhibition with a Spanish artist, Gerard Ortín Castellví, who was exhibiting a show about wolves in Spain, and he came and exhibited wolf piss here. I still have some wolf piss, which is produced in Alaska to scare away animals. In Iceland, it’s used on wild game. In our space, he was screening a film that he made about how humans have become perverse in the animal kingdom. Smelly stuff. That was a memorable show.

So you are keeping little things from each show? Are you collating an archive?

Yes, we’re making a small archive. We hosted a performance with artist Nikulás Stefán Nikulásson and the theater group leikhópurinn X (theatergroup X), that was twelve hours long. It was absurd, people were coming and going, back and forth, and it just became weirder and weirder. We have worked with them before, we saw a previous performance they did and thought it was so good. Sometimes we just say hey! If you want to do something here, please do. That’s maybe one of the spontaneous parts of running the space.

Are you going to do anything with the archive?

Nýlo has, of course, their own artist-run archive going on, so we have already started a very funky box there. Whenever we feel like it, we drop some stuff over.

How long do you see Open running for? A lot of small galleries are constantly opening and closing because they’re having to move spaces, because there’s this precarity around how long the lease is, or how much everyone can afford to do it for. I wonder if you’re factoring that into the way that you’re running exhibitions?

I think we are just here until we are here. We don’t have a lease coming up, and we need a studio, so those factors are kind of out—it’s a matter of us just being here. Also because there is no time pressure, that’s why we are being so slow with it. We can be asked to leave for sure, but then we would have a year or so. That’s also why we can allow ourselves to close often and to take time.

Do you think if you had to move out, would you continue Open somewhere else? Do you feel like OPEN now has an identity?

I don’t think we would be doing OPEN unless we have the space. I feel like it’s so easy to become a household name in Iceland, people know OPEN as an exhibition space, it happened almost overnight—we exhibited pamphlets and then everybody was like ‘ah, so have you seen this exhibition at OPEN?’ Like, we did nothing, you know? It’s such a tiny community, and it’s so nice and rewarding. But we have never had this discussion of, ‘is open bigger than us?’

Have you ever had scaffolding and utilised the length of the space?

We have used the height a little bit, but not for a proper, huge installation. Maybe the water from the Aapos’s exhibition—he was exhibiting 4200 litres of water, the same amount it takes to make a t-shirt. It was all the way to the ceiling and exhibited in fluid containers. The white containers with metal that are used on ships, with motor oil in it. They end up here and then they are not reused.

Is there a specific way that the pandemic has changed your approach to putting on shows, or even in maintaining the studio?

It did in 2020, we had to have a bit of a hiatus—until February this year we were almost completely closed. Now, we have so much spunk in us to do something and get projects out there, so we’re going to be quite active going forward. Maybe? Right?

Maybe we should end on a semi-colon? Parenthesis, ….?

If you can catch the space when it’s open, visit Grandagarður 27.