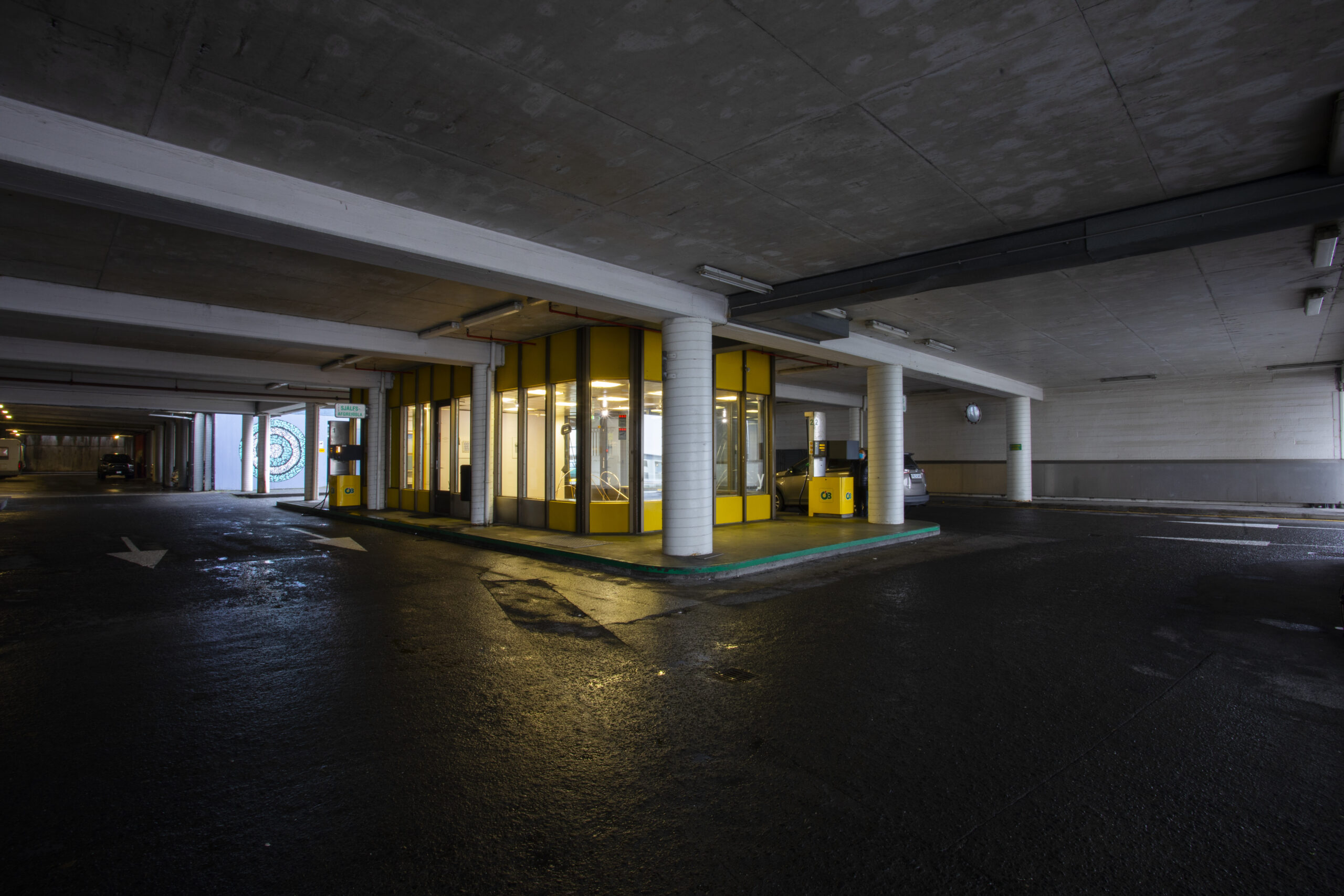 A collaboration between Sigurður Atli Sigurðsson and Olga Lilja Ólafsdóttir, Y Gallery opened in June this year in a disused gas station in the depths of a Hamraborg car park. The site of the gallery itself has the potential to create fertile ground for thought about modernism and Icelandic car culture, expanding the possibilities of viewing sculpture and installation from public space. We spoke to Sigurður Atli below on the inception of the project, it’s dream-big plans and artist-first ethos.

How do you think your perspective comes into the opening of Y Gallery and can you talk about the initial ideas for the project?

I run Y gallery with Olga Lillia. We met because she was one of the people who helped renovate Ásmundarsalur, when it changed from being a museum into a private exhibition hall. That was an interesting development because it wasn’t something that existed before. We started the Christmas exhibition there, which has around 150 or 200 artists exhibiting. It included around 500 works and drew a huge crowd—we had 1500 people at the opening the year before last, which proved to me the wider public’s interest in art in Iceland.

It’s a small scene here and with artist run spaces, you mostly always experience the same crowd at openings. When I lived in France it was the same, there were similar people at every opening. It was quite refreshing to see this huge, more general interest in art at Ásmundarsalur, and since then Olga and I have had the idea of starting something, whether it’s a gallery or a broader, more experimental project. We weren’t really interested in getting into this traditional commercial gallery model, because that’s been done really successfully already. I wanted to create something for artists that could serve as a fresh opportunity for them, as well as a new experience for the audience.

We have works for sale as well. You can call it a gallery, but it’s also just so much more than that, because we have this space, this complete gem of an architectural space, in this garage in Kópavogur, but we also have a backspace where we have works by 20 to 30 artists. These are mostly artists that are not represented by major commercial galleries. We sell works by artists and we have a website with the works and all the information about the work for people to browse. Rather than focussing on building up some kind of a perfect white cube somewhere in the centre of town, we just looked at all opportunities.

Have you had any surprising or non-artist crowds visit the gallery?

Yeah, there’s a major interest in the neighbourhood. There are 200 or so apartments in the building, so people are always dropping by. Many artists have this grand goal in creating a link between different communities, and somehow it seems to be working here.

Both you and Midpunkt being here is going to change the neighbourhood quite a bit, is that something you’ve thought about?
Yes. Artists get grants to do projects like this because it has an amazing impact on the environment. You see that in all the big cities. There’s this out of order gas station, and now artists open up galleries and bring the neighbourhood to life. When we had our first opening, it was exactly how I imagined it. Gerðarsafn and Midpunkt were opening at the same time and it felt like we were in a bigger city, where hundreds of people were walking between galleries—it was so great.

Can you talk about the initial stages of choosing the space and selecting Una Björg Magnúsdóttir as the first artist to exhibit?

I just let myself dream, wondering, if I could choose any space in Iceland, what space would I choose? I didn’t know if this place was still a gas station or not. They’d been running it for 50 years and then it just closed. So we contacted Olís with our idea to start a gallery here, and they were really positive about it, which was a really nice surprise. They helped us work it out over a few weeks.

I had exhibited with Una at i8 Gallery, and she showed this pearl necklace, which is a found object, but it just created such an atmosphere. I think her works, even though they are like sculptures and quite simple, can totally transform the space and they can create a situation—the work is not something that you just look at, it’s an experience.

Let’s talk about the gas station as an idea, as it’s situated historically and today. My mind went to two places first— Ed Ruscha and the conceptual, modernist moment of the ’60s and ’70s, of taking art away from the beautiful or the monumental and just capturing these very banal and everyday spaces. Secondly what comes to mind also is the car culture of Iceland, the fact that there are more cars than people, and then there’s so many drive-throughs. Were those two contexts something you were thinking about with the venue for Y Gallery?

Absolutely.. Something that interests a lot of artists is this raw, everyday and banal cityscape. The gas-station as a place is so many things at once, it’s really beautiful in a way. I was thinking about Edward Hopper, his painting Nighthawks, this old-style cityscape, which is completely empty, except for these people that sit in the diner.

Then it’s also the gas station context in Iceland—I feel they function as local community centres, or they at least used to. They were places where you would drop in, have a burger, and kids would collect some bottles and exchange it for a candy bar. Also, the name of the gallery refers to the car culture. Back before ‘89, cars would start with a particular letter, and that would mean the place where it’s registered. The letter ‘Y’ was for Kopavogur, where the gas station is.

Do you conceive of the work in the space as intended to be viewed from the perspective of a car, almost like a drive-through exhibition?

Yes, definitely. We just have it open around twice a week. When I’m there and when it’s not open, I’ve observed people driving past or walking past. Because you can see the exhibition through the glass, especially when we emphasise sculptures and three dimensional work—they have this possibility of viewing from all sides, all the time.

Can you talk about the groups you’ve had to visit?

They include students, or potential buyers for work, or people with a company who want to come for a night out. That’s something that I find quite interesting—we’re quite used to the idea of art in the home—there’s the exhibition spaces, the art scene, the public space and the home. But then there’s the workplace. I was working as a technician, installing exhibitions in institutions and companies, and it was really interesting. These exhibitions in offices sparked a lot of conversation because when you have artworks in the workplace, there’s this group of people that see the art everyday, and that sparks a completely different conversation than these temporary exhibitions that are held somewhere, and people need to go to visit. I thought that was really beautiful somehow, and it sparked not only conversation but debate.

There is a precarity that comes with running an artist-lead space—with rent contracts like Y gallery’s being short, etc—do you see that ephemerality as a potentially positive concept or would you rather it have a longevity?

We’ll just do this as long as it’s interesting, it’s not something we’re going to hang on to. That’s what I thought right away. I thought, ‘yeah, if it works out, then we continue, if not then we go somewhere else.’ It’s good to have off-site projects going on too, that are not just tied to the space, to just kind of think of the gallery as a separate entity from the space it inhabits.

Are you going to exhibit international artists?

Yes, we’ve already started talking to a few international artists that are just super interested in coming to exhibit in this gas station. I think it’s so nice that people want to come to Iceland, and take part in a strange project like this, because it’s not an offer you get all the time. The Icelandic art scene actually acquired an international network of collaboration because people were coming and stopping over when they were flying between the states and Europe. Icelandic artists got to know all these artists abroad, and they started making artist books and collaborating, which continued through mail art.

We are going to collaborate with biennales and festivals. We also just want to allow a space for artists to simply have a solo exhibition, and just do what they want to do. Somehow, the space really embraces that kind of exhibition, because there is this one wall, one space and it’s completely symmetrical.

Yes, it gives a specific artist-driven platform, that maybe isn’t allowed by curatorial or museum interests because they bring their own identity that can interrupt the work.

And also, there are these big exhibition spaces, and big museum spaces, where artists have to have a collection of works that they’re exhibiting. But at Y gallery, you can focus on one installation.

You said you don’t feel like there’s enough galleries in Iceland, and I always ask people that question—do you feel there are too many spaces for the amount of people?

There are a lot of spaces, but, maybe not in a rational way, I just like to constantly develop new ideas. I think it’s a very positive thing when artists are taking part in shaping their working environment, I think it’s just good and valuable to invent new spaces to exhibit in. And if we have too many spaces, we can just import some more artists—or educate more artists!

Y Gallery is holding an open call. ‘Billboard’ presents an opportunity for artists to create an artwork for public space in collaboration with Reykjavík Art Museum. During the period 1-5 January 2022 there will be a Commercial Break on Billboards 350 screens across the city of Reykjavík. During this time an artist will present an exhibition of a new work commissioned for the project. Learn more about Y Gallery and apply: ygallery.is/