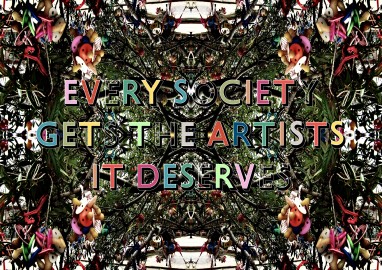 Every society gets the artists it deserves

Since finishing his postgraduate studies from the Glasgow School of Art in 2006, Arnfinnur Amazeen has been living and working in Copenhagen. Born in Iceland in 1977, he studied at the Iceland Academy of the Arts and had his first major solo exhibition in the Kling & Bang Gallery in Reykjavík in 2010, entitled Darkness Carried in (Again). It consisted of a total-installation with all the walls wallpapered with custom-made prints, onto which other two-dimensional work was mounted, surrounding sculptures on the gallery floor. These included signs displaying absurd dos and don’ts, a giant fence, plastic-wrapped rocks and a knitted vest with text reading “Normal is the new avant-garde”– a captivating visual world, if somewhat bizarre.

Amazeen describes his work as a kind of distortion of found materials. He plays with the juxtaposition of photos, graphics and texts in individual objects or images, and sometimes in elaborate installations. He gathers the raw materials from quite different sources, distorting their original meaning in the work process. Yet his end result is far from chaotic – on the contrary. The precision and minimal approach with which Amazeen selects and reassembles his subject matters is characteristic of his method. His constrained choices often give the work the appearance of being loaded with preferred meaning and even propaganda. Still, playfulness and humour are never far away.

The use of deadpan text suggests conceptual roots, but with a hint of irony. The artist comes up with short and striking phrases and visualizes them with sharp visual language borrowed from branding and corporate design. In the economic upswing, shortly before the meltdown, Amazeen introduced the Viking-Playboy Bunny that turned up in several of his installations. The somewhat fascistic icon referred to the double-edged nature of the Viking capitalism and its credit-driven financial boom and subsequent bust. Amazeen does not exclusively point fingers, far from it. He continuously questions his own role and responsibility as an artist, as in the print from 2008 where in a colourful and cheerful manner he writes, “Every society gets the artists it deserves.”

Amazeen’s latest exhibition, Self, was recently up in Værelse 101 in Copenhagen. In the compact storefront gallery he exhibited a wall painting on the far end and two other works on either side. As always the artist kept it clean and simple, with text, colour and graphic imagery. He addressed the relationship between artist and viewer, for example in the work that read “You See Yourself Seeing Yourself…” where a sentence doubles back on itself in an endless loop. Amazeen draws on the classic notion of all understanding and interpretation ultimately deriving from within our identities, as we mirror ourselves in the environment, in other people and in works of art. To propose a simple/complex question, perhaps this is the fence that we constantly try to cross over?