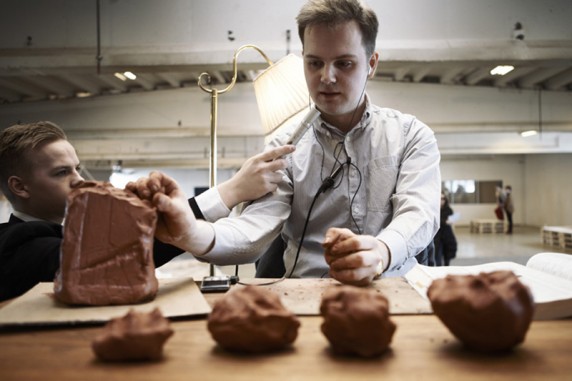 Conversation, collaboration and an unpredictable conclusion (if at all)

Last December Ámundason did a performance in the Nikolaj Kunsthal for Contemporary Art in Copenhagen, as part of the Samtalekøkkenet series. For the first time as part of his live events, he invited members of the audience to join him on stage and eight people accepted. Equipped with packets of biscuits, latex gloves and ceramic tiles, the artist asked each participant to pose, while he walked around them chewing the biscuits. He then took the indeterminate chewed mass sculpted in his mouth and placed it on a ceramic tile. One by one, the participants posed as the artist delivered his unique little sculptures.

Born in 1984, Ámundason completed his studies at the Malmö Art Academy in 2011. He is still based in Sweden, where he plans on staying for the time being. Interesting projects and exhibitions have come up for the young artist in the recent past, including the Gothenburg Biennial, Sequences, the Armory Show and Lunds Konsthall. It seems that 2013 will continue to bring exciting opportunities.

The recent performance in Copenhagen, entitled Chews, is an example of Ámundason´s interest in the creative process behind art. He highlights the ambiguous connections between idea and outcome, intention and accident, inspiration and creativity. The slightly pathetic biscuit-sculptures resulting from the tactical event suggested an artist´s alienation from his creation, which seems to take on a life of its own in a complicated creative process. Previously, Ámundason has sculpted clay during random phone conversations (Samtöl, 2011) and worked on his sculptures while two opera singers perform around him in the studio (Styrofoam, Burlap and Plaster, 2011). As in Chews, the resulting objects offer little to the viewer about the circumstances under which they came about and the work relies on the performance or the video documentation.

In Collaboration Monument (2012) the title gives away certain inconsistencies at stake. When two or more artists work together they tend to strive for an open-ended process with no fixed conclusion. Here, Ámundason and artist Olof Nimar invited a political figure and an architect to work with them on a public sculpture that would stand as a testament to cooperation. Taking place in the Netherlands, a local member of the House of Representatives acted as a ‘surrogate’, while the two artists gave him separate instructions through headphones, guiding him as he sketched the monument on paper with a pencil. They later handed the drawing over to the architect, who interpreted it into a three-dimensional sculpture that was then constructed on a peninsula outside of DordtYart, Dordrecht.

Ámundason and Nimar are currently in the process of repeating the project, now alongside the Gothenburg-based rock band, SonSon. The eventual monument will serve as set design for their upcoming tour through Germany. The project will finally be presented in an exhibition in Mors Mössa, Gothenburg. Ámundason sees this project becoming an ongoing part of his practice that he and Nimar can revisit from time to time in different scenarios. One project that they are particularly excited about involves them on a sunny beach instructing a surrogate via Skype, initiating the creative chain reaction but not necessarily seeing the completed monument.

The artist is fascinated by the element of interpretation inherent in the project, where language becomes drawing, which then becomes sculpture. He is excited to see what will happen when SonSon´s music becomes part of the game. Ámundason has worked with music before, in his work from 2009, Kreppa: A Symphonic Poem About the Financial Situation in Iceland. He transcribed into musical notes words and speeches from local politicians, investors, protesters, banks and the media, who were all involved with the financial crisis. The outcome was a public orchestral performance of rhythmic, if somewhat cacophonous, music.

Collaborative- and process-based practice, which for some reason has progressed by taking itself ever more seriously, implementing detached chain reactions and faceless collaborations, becomes engaging in the attitude of this interesting artist. Ámundason’s works do not seem to be overly strategic, clever or impersonal. Far from it, they are poetic, even romantic, somewhat clumsy and plain silly at times. Coming up in 2013 is the Mors Mössa project, in March, and an exhibition in the Sogn og Fjordane Kunstmuseum in Norway, in June.