Tacit Gaze: An installation by Raisa Foster and Arna Valsdóttir 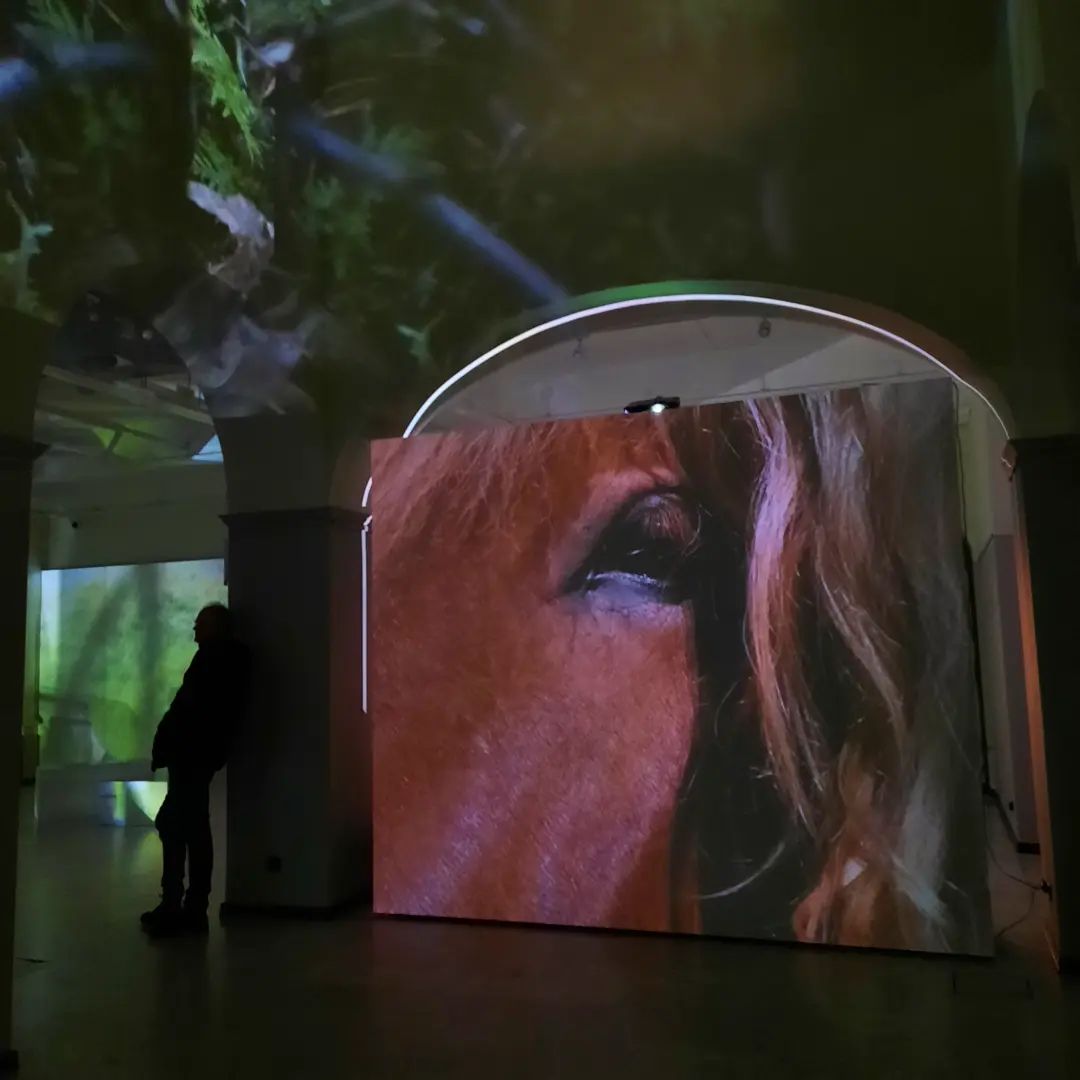 Tacit Gaze is an installation of Raisa Foster and Arna Valsdóttir’s collaborative video works in the Gallery at the Culture House Laikku. The mosaic-like work of art aims to create for the audience a sensory feel of silent
conversations between the artists and different environments and creatures.

Raisa and Arna met in 2014 while working as the artistic directors of dance and visual arts in the Nordic Culture
Event of the Year, “The Nordic Light”. After this successful collaboration, they wanted to develop further new methods for their embodied and site-specific artistic work. As a result, they met again in Iceland in the autumn of 2017 and the summer of 2018.

This exhibition is the result of an excursion around the country relying mainly on non-verbal communication and perceptions. In our previous works, both artists had dealt with themes such as movement, voice, stillness, and silence in natural and urban environments. Both also share an interest in using the sense of touch to explore diverse subjects such as other living creatures, the forces of nature, buildings, and soil. Random encounters with moss, a hill, a cow, a horse, a bathtub, and an abandoned fish factory are presented at the exhibition as fragments of their journey.

alternative landscapes and novel encounters. We believe that art can offer new perspectives on

the aspects of life that we often take for granted and no longer pay attention to.

Raisa’s artistic research in this project has been supported by Kone Foundation in 2017, Arts Promotion Centre Finland in 2018 and the KESTO project in September 2021. The exhibition is funded by Icelandic Visual Arts Fund, Icelandic Art Center, Akureyri Cultural Fund and Letterstedtska Foundation.

Raisa Foster (1976-) is a multidisciplinary artist and scholar living and working in Tampere. Dr. Foster has been focusing on the questions of ecosocial justice in the past several years. Originally a dance practitioner, she combines her expertise in body and movement with novel possibilities of digital media, creating accessible but conceptually stimulating total works of art. Her performances and media works have been exhibited in Finland, Iceland, Australia, Italy, Mexico, Hungary, Austria, Denmark, the Netherlands, and the USA. Foster’s film Sounds of Grey (2016) was an official selection of the Loikka on Tour program in 2018—2019, and her video work Lupina (2016) is in the collection of Tampere Art Museum. Foster has written several academic articles on the topics of recognition, contemporary art, dance, and ecosocial education. She holds the titles of adjunct professor in dance pedagogy (University of the Arts Helsinki) and in social pedagogy, especially artistic research and practice (University of Eastern Finland).

Arna Valsdóttir (1963-) is an Icelandic artist known for merging sound and image in her works, creating a conglomeration of music, performance art, and image projection. Valsdóttir studied art at MHÍ (The Icelandic College of Art and Crafts) and Jan van Eyck Academie in the Netherlands, graduating in 1989. Her works are in the collections of Akureyri Art Museum and Reykjavík Art Museum, and have also been exhibited in various galleries and cultural locations in Iceland and abroad. Valsdóttir is the director of the Heim Video Art Festival, which she has curated since 2015 in collaboration with A! Performance Festival in Akureyri. Along with her art practice, Valsdóttir has been teaching art since 1990. Currently, she teaches at the art department of Akureyri Comprehensive College and explores video art with students with disabilities.