Time and Time and Again 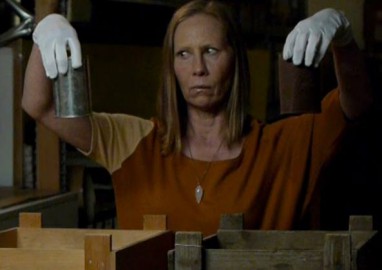 Markús Þór Andrésson and Ragnheiður Gestsdóttir present TIME AND TIME AND AGAIN as part of the Reykjavik Arts Festival. The film is based upon the life and works of Icelandic conceptual artist Hreinn Friðfinnsson, but rather than produce straight documentary the creators of the film have produced a fictional narrative that examines the creative drive and the nature of time itself. The film stars Finnish actress Kati Outinen as an employee at the institute for time, Magnús Logi Kristinsson as a younger Hreinn Friðfinnsson and features the artist himself.

The Living Art Museum (Nýló) is hosting an exhibition which features a range of works from Hreinn Friðfinnsson, from older works to new pieces made especially for the space. Time and time and again is playing every hour on the hour at The Living Art Museum from 5th of April to 5th of June.

As part of the exhibition, and during the Reykjavik Arts Festival,there will be a series of talks and performances.

On Saturday May 31st one of the film´s actors and performance artist Magnús Logi Kristinsson presented a happening. In addition a new video work created by Hreinn Friðfinnsson in response to the project was added to the exhibition.

On Thursday the 5th of June, on the last day of the exhibition, there will be a visual seminar on the film and then work of Hreinn Friðfinnsson. The presenters are Ingibjörg Magnadóttir, Oddný Eir Ævarsdóttir and Huldar Breiðfjörð.

Carmel Seymour had the chance to ask Ragnheiður Gestsdóttir about the film.

Carmel: How did the project originate?

Ragnheiður: Markús and I worked with Hreinn on separate occasions a few years back, we knew his work but getting to know him personally changed our perception of his work. We were attracted to his philosophical yet playful attitude towards life. There is humour in the work that before was not that obvious to me but it also has this element that is completely beyond words, like a language beyond language which I find incredibly inspiring and challenging to work with. I think that is what we wanted to communicate, this ´other´  language and way of looking at the world that so inspired us.

C: Would you call it a collaboration between Lofi and Hreinn Friðfinnsson? What was Hreinn´s imput?

R: We all agreed in the very beginning that we didn’t want to make a film that was traditional in the documentary sense, based on interviews and images of the work. So the film was to be a work of art almost in itself. Everything in the film is stolen from Hreinn, he IS the film and our approach is formed completely on him and everything about him. There is a reference to his work in almost every frame of the film. But Hreinn was incredibly generous and trusting, he didn’t want to influence the film at all and basically allowed us to boss him around as we pleased. That trust is of course based on the fact that we spent a lot of time together in the process, especially as we wrote the script and formed the approach. It was so much fun to work with him, I’m going to miss it.

C: How did he feel about the final production?

R: He is very happy with it. Thank god! You never know. And we are very pleased with the fact that people who know him well feel it represents him very well.

C: It is great to be able to walk through the exhibition at NYLO and then see so many of those works featured in the narrative of the film. Hreinn has a created a huge body of work, how did particular pieces feed the creation of the film´s story?

R: We used the work as wayfinders when we wrote the script. So the story is all written around the work, the stories behind the work or the stories around the creation of the work. And then we created kind of a fictional story to connect the wayfinders, based on his life and our personal understanding of the work. It was such a fun way to work and to write a story. In order to get funding in the film world you need the written word, the script as text but we were constantly going back and forth between the visual and the textual in the process. It’s tough to use words for something that belongs to another world. But it worked out perfectly in the end.

C: There is a dynamic relationship between artistic experimentation and precision in the film. Can you talk about the relationship between the scientific quest for truth presented by Kati Outinen´s character at the institute for time and the creative searching involved in making art?

R: We felt that in order to highlight this creative insight we needed to also involve the opposite, the scientific, the systematic. It’s hard to see one without the other. So Kati represent this quest for understanding, the system we use to grasp our reality – but it also shows that this system cannot in fact grasp our whole being – this is something Kati’s character realizes during the film, that Hreinn has a key, a perspective she cannot explain in her terms. So she also represents us, the filmmakers, and our process during the making of the film. We are so inclined to have things make sense as humans but the beauty lies in the cracks, in that other sense that we sometimes forget to trust.

C: There is a beautiful depiction of the artist at play and the importance of the artist´s studio, particularly in Magnús´scenes.  Is there a relationship to this idea of play in the way you crafted this film?

R: We were totally attracted to this idea of play in the creative process yes – I’m so glad you felt that. But I have to admit that the script was written with serious precision and the shooting was very systematic in a way. But we wanted Hreinn’s playfulness to be in the film and this idea of the creative process being something that just comes to you very easily if you’re connected to that mind set.

C: I know that you spent time at the Banff Centre in Canada editing the film. It is a very intense hub of creativity. How did that time affect the outcome of the film?

R: Being there was absolutely amazing. We had already almost finished the edit of the film so it was the perfect time to get input from other creatives. We really used the time well to get feedback from a wide group of people and it had a big influence on the final outcome. They soundtrack and the sound mix was created from scratch there too, since most of the film is shot on 16mm film without sync sound this was a big job and they were just wonderful to work with. Also when it came to the graphics and final colours they pushed the production to another level that we could never have done by ourselves. It was very helpful to be able to just sit there with the film for a month without life getting in the way you know.

C: How long was the production of the film?

R: Years! For some unknown reason the world is not crazy about funding experimental films about artists?! It was a long process just to get the funding together but we did manage to get funding from various places in the end and it made it possible for us to really make the film we wanted to make without compromises. We also took a long time researching and writing and going to scriptwriting workshops and funding platforms and what not.

C: There is a huge amount of referential work born from this project, Hreinn´s new video work, the exhibition at NYLO and his new works for that space and then Magnus´performance. That must be a very satisfying conclusion to all the hard work.

R: Absolutely, it makes so much sense to do it like this. It was an experiment and we’re super happy about the results.

C: How did you feel about Hreinn´s new video work made in response to the project?

R: We think it’s hilarious. They were like, “well you’re taking your time so in the meantime we made the film ourselves”. You know Hreinn and Magnús Logi are very close friends and they kept teasing us about the time we were taking. And we just loved that; how we were stealing  ideas from Hreinn and then he’d steal our ideas back, it just represents his attitude very well.

C: What can we expect at the visual seminar on the 5th of July?

R: Oddný, Ingibjörg and Huldar will talk about their perception of the work and the film separately and then maybe we’ll all talk together. It’s very open. And it will be satisfying to kind of tie a bow around the project like that.

C: Where else is the film being shown?

R: The idea is to have the exhibition, in some form, and the film travel together. They will hopefully find spaces that want them. So that’s what we’re working on now.

C: Are there any new projects coming up for LoFi productions?

R: We’re still digesting this one. Having finished the film and opened this exhibition is really just the beginning – now it’s ready to take off!

Ragnheiður Gestsdóttir (born 1975, Reykjavik) is a filmmaker and an artist living in Iceland. Her studies include Bard College, Milton Avery Graduate School of the Arts, with MFA in Fine Arts, class of 2012. Gestsdóttir completed an MA in Visual Anthropology from Goldsmiths College, University of London, 2001 and BA in Anthropology from University of Iceland, 2000. She is one half of LoFi productions, alongside Markús Þór Andrésson. Founded in 2005 the company focuses on the production of documentaries about art, artists’ films and video works and the use of the moving image for exhibition making.

Carmel Seymour (b.1979) is an Australian artist living in Iceland. She graduated from the Victorian College of Arts with a B.F.A. Honours in 2009 and has exhibited widely since then in solo and group shows. Her work is featured in numerous collections including Artbank and the Proclaim Collection and she was the recipient of the 2013 Stuart Grant Travelling Scholarship for drawing. She is currently completing a M.A at Listahaskoli Íslands. Carmel Is represented by Helen Gory Gallerie, Melbourne.