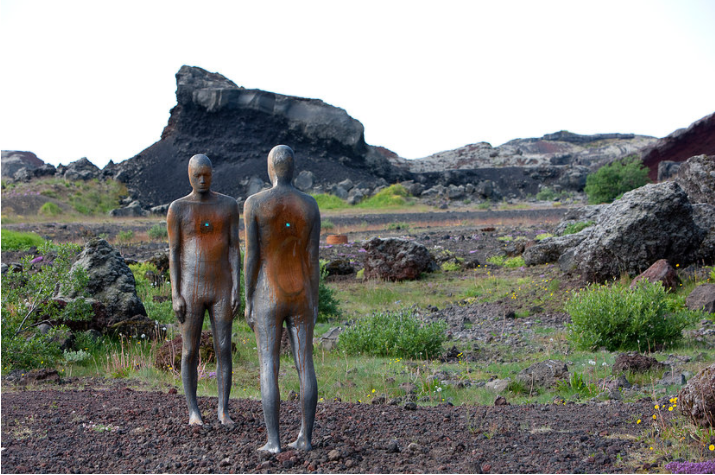 This autumn Icelandic artist Steinunn Thórarinsdóttir will be opening two sculpture exhibitions, ARMORS and CONNECTIONS, in public spaces in Denmark.

ARMORS incorporates three life size sculpture pairs in cast aluminium, a total of 6 sculptures.  Within each pair a suit of armor stands in human-like dialogue with a raw, androgynous figure of the same material and human scale. The suits of armor originate from New York City’s Metropolitan Museum of Art permanent collection. Three precious medieval armors were 3D scanned meticulously by the museum and cast into sculptures, a collaboration between the museum and the artist.

The androgynous figures standing against the suits of armor in the installation are central to Thórarinsdóttir’s art. They represent the general human psyche rather than a distinct sex or ethnic identity. The human-like figure itself is stripped off any societal, cultural and political implications.

The pairs symbolize how mankind’s need for protection has been central to our lives for centuries. The merger of medieval armors and ageless, androgynous figures speak to the human condition today and in the past.  At a time when the world is physically and ideologically divided, ARMORS is put forward in the public realm to stimulate conversation and bridge differences.

The installation is life size and stands at ground level in the heart of Copenhagen inviting visitors and locals alike to actively participate in the dialogue, feel the power within each pair, and become part of the conversation.

ARMORS is presented in collaboration with Galleri Christoffer Egelund and the City of Copenhagen.

At a time when societies are physically and ideologically divided, by COVID and climate change, Dr. James Rogers, and artist Steinunn Thórarinsdóttir seek to bridge differences and connect people with a joint project on human insecurity and art.

As an interdisciplinary historian of war and human conflict, James Rogers has worked with Steinunn Thórarinsdóttir for the last five years. He has applied her work to stimulate new interpretations of how people are connected, divided, mentally and physically fragmented, and personally affected by war, conflict, and crisis. This with an overall goal to express understandings about the impact of crisis, catastrophe, and war on human society.

On September 1st 15:00-17:00 the Danish Institute for Advanced Study (DIAS) invites the public to take part in this interdisciplinary experience at the official opening reception of the CONNECTIONS exhibition at the SDU Campus.

18 life-size, androgynous, figurative sculptures will be arranged on the ground around the Danish Institute for Advanced Study, Center for War Studies, the SDU campus, Nordatlantisk Hus, at Platanpladsen in Odense city and outside the Icelandic Embassy in Copenhagen.