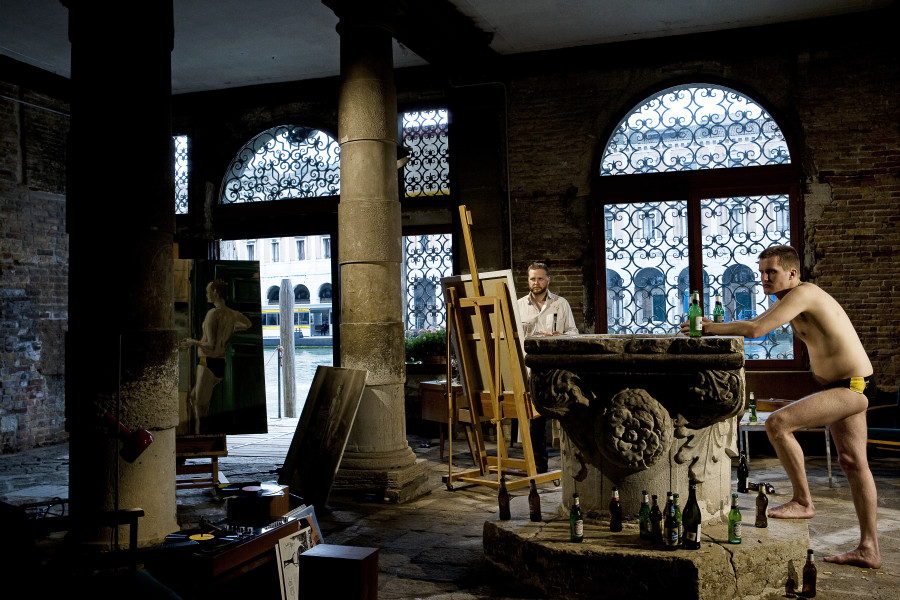 The End featured Ragnar Kjartansson, a self-described incurable romantic, whose multifaceted artistic practice is rooted in a tradition of acting and performance with an existential and absurdist sensibility that can be linked to artists ranging from Caspar David Friedrich to Gilbert and George. Kjartansson’s exhibition for Venice, entitled The End, will feature a tableau vivant of the artist and his model that will last for the entire six-months of the Biennale, along with a monumental video and music installation. It will be presented in the Palazzo Michiel dal Brusà, a 14th-century palazzo on the Grand Canal near the Rialto, which has served as the Icelandic Pavilion since 2007.

Transforming the Pavilion into a makeshift studio for the Biennale, Kjartansson will relentlessly paint the portrait of a young man posing day after day against the backdrop of the Grand Canal. The young man modeling for him will be smoking cigarettes and drinking beer, while clothed only in a bathing suit. For six months, Kjartansson will limit his art production to the painting of this scene. He will produce one work after the other, with the paintings made on previous days left to accumulate in piles around the studio. Though not an idealized version of the artist and his model – such a proposal being disrupted by the incongruous appearance of the Speedo, the cigarettes, and the beer in an otherwise romantic setting – the performance is partially based on questions of the artist’s self, suggesting his perpetual re-conceptualization in relation to his surroundings and previously existing works of art.

In a separate room, a new video and sound installation consisting of several scenes shot in the Canadian Rocky Mountains will display Kjartansson and a collaborator playing an ambiguous country music arrangement on a variety of instruments. Recorded directly in the snow-covered mountains, the music will take on the sounds of nature that, along with the expansive sights and sounds in the video, will be in sharp contrast to the intimate and isolated performance in the adjoining room of the Palazzo. Taken together, the recorded performance in the Rocky Mountains and the live performance in Venice will create a dramatic juxtaposition between two iconic settings. Connecting the two portions of the exhibition, however, are themes of creativity, camaraderie, and Weltschmerz or world-weariness.

Also a part of the exhibition, and in anticipation of the Biennale, Kjartansson and his friend and fellow artist Andjeas Ejiksson began exchanging letters in early 2008 chronicling preparations for the Pavilion. The two artists approached this dialogue from a performance angle, slipping into the roles of two sentimental gentlemen of yore. In the correspondence, which will be published in its entirety in the exhibition catalogue, Ejiksson describes the Pavilion as follows:

“I imagine the Venice Pavilion being a lighthouse at the end of the world, watching the verge of nothingness.

Waves chasing the lost souls and the mist blurring the horizon, protecting you from the vertigo of the abyss. It is a nameless sea and sitting on the dock is a man without fate”

Ragnar Kjartansson (b. 1976, Reykjavík, Iceland) conjures up emotions in his work that he can pass on to his viewers, with a keen eye for the tragicomic spectacle of human experience where sorrow collides with happiness, horror with beauty, and drama with humor. In his versatile artistic career, he has focused on video, painting, and drawing, with performance at the heart of his practice. Both of Kjartansson’s parents are actors, and acting, repetition, and identity are ever-recurring themes in his work. He has taken on countless roles in his performances, combining his own personality with personas from cultural history. His work incorporates a mélange of show business icons and nostalgic imagery from bygone eras of theater, television, music, and art, allowing him to blur the border between life and art, reality and fiction, and to create bold statements that strike chords with his audiences. In addition to his work in the visual arts, Kjartansson has had a career in music, releasing several albums with his bands and performing throughout the world.