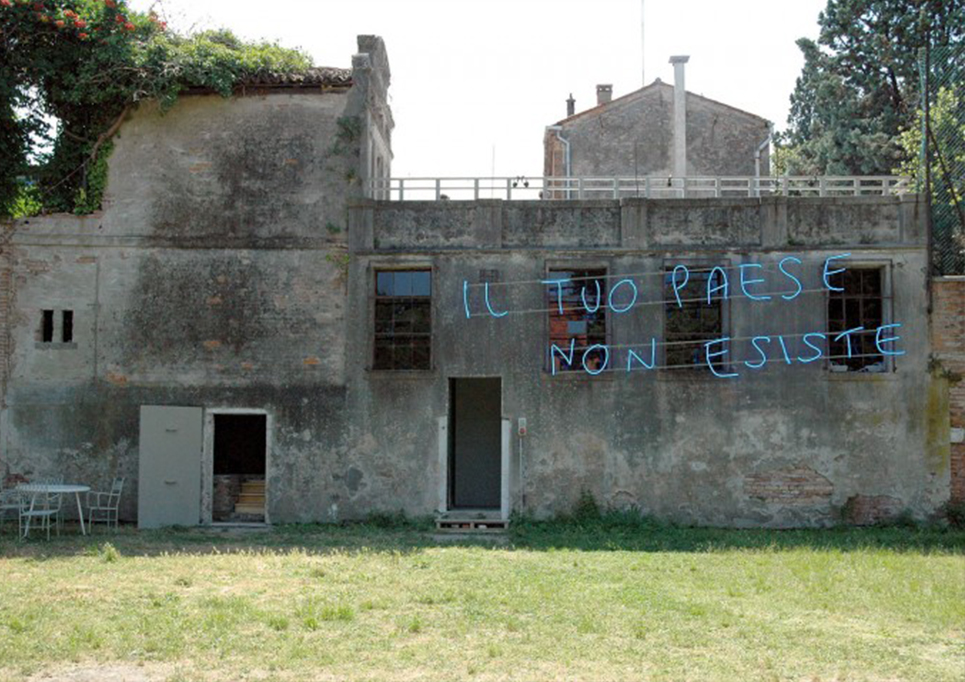 Libia Castro & Ólafur Ólafsson collaborations explore the political, socio-economic, and personal forces that affect life in the present day. Their work, which has taken them to cities around the world, and often develops out of their personal interactions with people and places, can be characterized as an interpretation of culture and the complex relationships that compose it. Castro and Ólafsson’s exhibition for Venice, Under Deconstruction, unveils current sociopolitical issues in Iceland and elsewhere, using video, performance, sculpture, sound, and music interventions.

It features: a new iteration of their ongoing project, Your Country Doesn’t Exist (2003-present), which is presented in various locations in the city; a musically-infl ected video installation, Constitution of the Republic of Iceland (2008-2011), showcased within the pavilion; as well as a sound sculpture, Exorcising Ancient Ghosts (2010), installed on the roof of the pavilion.Your Country Doesn’t Exist is an ongoing campaign, begun in 2003, for which the artists have traveled the world spreading the message, “Your country doesn’t exist” in different languages and through various visual modes, including billboards, T V advertisements, and wall-drawings. In Venice, Castro and Ólafsson are presenting the project in four iterations.

Preceding the Biennale, the artists staged and recorded a public performance that featured a mezzo-soprano, Ásgerður Júníusdóttir, traveling the canals of Venice by gondola while singing the phrase: “This is an announcement from Libia and Ólafur: Your country doesn’t exist”. The vocalist sang the phrase in several languages, and was accompanied by both trumpet (David Boato) and guitar (Alberto Mesirca). The lyrics were written by the artists, and included appropriated phrases from a text by writer and curator Antonia Majaca, about the Your Country Doesn’t Exist project. The score was composed by Icelandic composer Karólína Eiríksdóttir. For the duration of the Biennale, a video installation of the performance is displayed in the Pavilion of Iceland. On 2 June, a performance will also be staged in the canals of the city. The gondola will follow a route passing the national pavilions in the Giardini di Castello and the Arsenale. Additionally, a neon sculpture reading “Il tuo paese non esiste” (“Your country doesn’t exist” in Italian) is installed on the façade of the pavilion. The final part of the series is a “Do-it-Yourself” painting done by the Icelandic ambassador Gunnar Snorri Gunnarsson in February 2011, in collaboration with the artists.

Constitution of the Republic of Iceland represents Castro and Ólafsson’s first collaboration with Icelandic composer Karólína Eiríksdóttir. For this piece, the artists worked with the composer to create a score to which the Icelandic Constitution could be performed by soprano and baritone vocals, piano, double bass, and a mixed chamber choir. The composition was first publicly performed in March 2008 in Iceland, six months before the collapse of the country’s banking system. The video presented in Venice is a recent performance of the work, which was staged at The Icelandic National Broadcasting Service Television, and broadcast on Icelandic national T V in February 2011. The video was aired several times, the first of which having been the day the new elected Constitutional Assembly was set to begin revising the Icelandic constitution.

Exorcising Ancient Ghosts is a bilingual audio piece based on Castro and Ólafsson’s research into the rights of women and foreigners in ancient Greek society, which was produced in Naples in 2010. The work was inspired by the artists’ discovery of an Athenian law from the mid. 5th-century B.C, which prohibited Athenians from marrying, or having intimate relations with foreigners. Castro and Ólafsson worked together with a team of researchers to create a dramatic “text collage”, composed of various excerpts from ancient Greek political, philosophical, judicial, and literary texts. The artists then staged two readings of the texts, spoken by two couples having sex: one featured a Neapolitan woman and a Balinese man reading the text in Italian, and the other featured a couple from New Zealand reading the text in English. For Venice, the artists present the work as a sound installation on the roof of the pavilion, incorporating the architecture of the pavilion itself into the work. The audio recordings are projected simultaneously from a terra cotta vase through two sets of headphones.