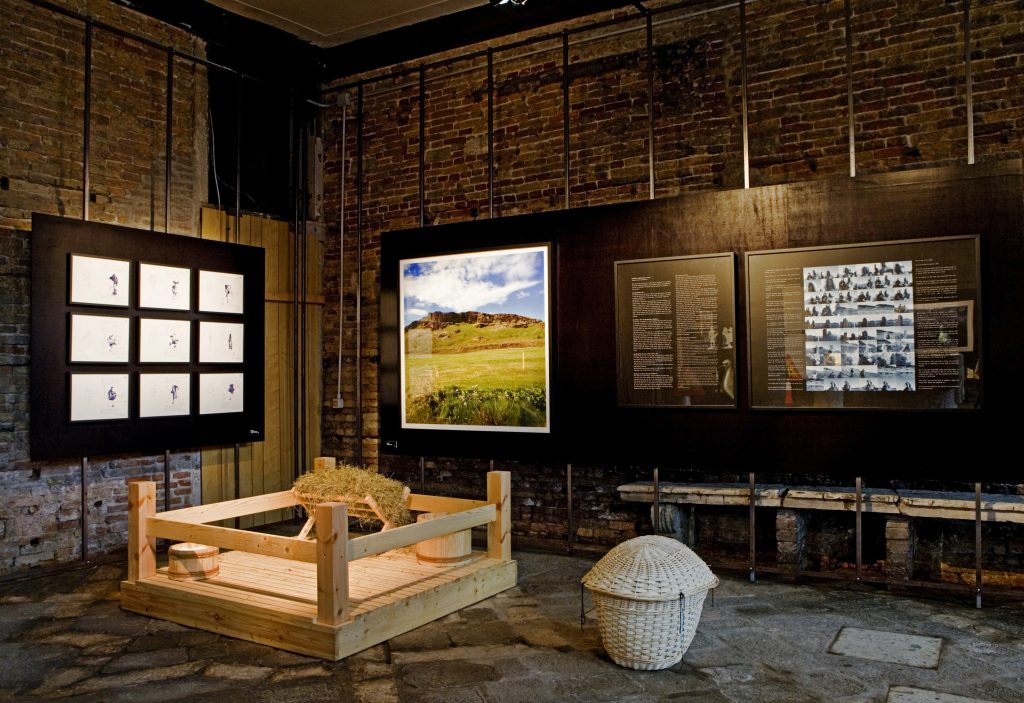 Steingrimur Eyfjörd is one of the foremost of a generation of artists who came to prominence in Iceland during the 1970s. His prolific output over the past 25 years draws on his experience not only as an artist but as a comic strip author, magazine editor, writer, curator and teacher. His work employs a wide variety of media, including photography, comic strip, video, painting, sculpture, performance, writing and installation. His art may appear equally diverse conceptually: founded on influences as disparate as folk tales, Icelandic sagas, women’s fashion magazines, religion, superstition, critical theory and many other current topics, Eyfjörd’s chains of association intersect at a nodal point of multiple meaning, forming a body of work that is multi-layered and at times perplexing yet always reveals an articulate and unexpected approach to the issues at hand.

Art historian Elena Filipovic has said of Eyfjörd’s work: ‘Confusion, longing, and frustration are some of Eyfjörd’s underlying subjects but these terms also inevitably describe how one feels in front of his works. His investigations of materiality and form can seem absurd or enigmatic and psychologically charged, yet they almost always prompt an awareness of the emotional, physical, and cognitive experience of art.’ (Steingrimur Eyfjörd, The National Gallery of Iceland, 2006)

The Golden Plover Has Arrived

The golden plover is a small wading bird, regarded as the harbinger of spring in Iceland. Its arrival in the country in late March, early April, is invariably announced in the local media. In The Golden Plover Has Arrived, composed of 14 individually titled works, Eyfjörd scrutinizes the culture, economy and politics of various moments in Icelandic history, in a deconstruction of prevailing interpretations of the creation of modernity in the country. As part of his work, Eyfjörd consulted and collaborated with people from all walks of life, among them artists and academics. He also visited a medium that put him in contact with a hidden person (a common Icelandic myth), normally invisible to human eyes. The purpose of this was to buy a mythical being – an elf–sheep – for The Sheep Pen, the central work in The Golden Plover. This somewhat surreal act highlights one of the most intangible concerns in Eyfjörd’s work: his interest in the function of consciousness in the construction of physical reality. This aspect of Eyfjord’s work is also a reflection of a belief and culture particular to Iceland and can be further explored in the curator’s introduction in the Biennale catalogue. A highly acclaimed exhibition of his work at the National Gallery of Iceland in spring 2006 provided a retrospective of Eyfjörd’s significant contribution to contemporary art in the country. He has exhibited extensively in Iceland as well as internationally, including solo and group exhibitions at the Reykjavik Art Museum, the National Gallery of Iceland, Akureyri and Kopavogur Art Museums, the Living Art Museum, Den Haag Gemente Museum, The Royal College of Art in London, Mücsarnok in Budapest, the Centre International d’Art Contemporain at Carros, the Meilahti Art Museum in Helsinki and the Henie Onstad Kunstcenter in Oslo. In 2006 he was selected for the Carnegie Art Award and in 2002 he received the Icelandic DV cultural prize for visual art.

Steingrimur Eyfjörd was born in Reykjavik in 1954 where he lives and works.